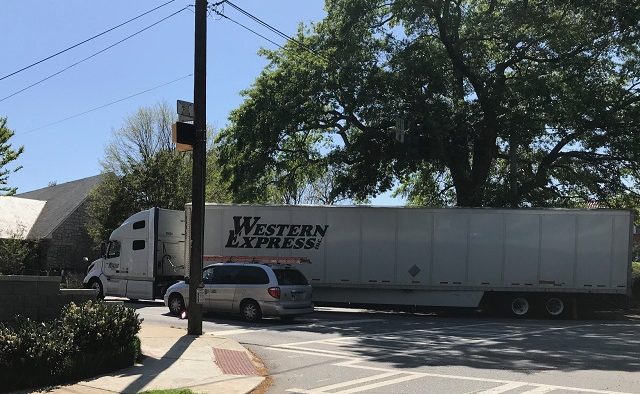 A photo of the tractor-trailer stuck in downtown Decatur. Image provided to Decaturish.
Share

Decatur, GA — Decatur Police and a wrecker service spent hours on Monday afternoon trying to remove a tractor-trailer that got stuck in downtown Decatur.

Sgt. John Bender said, “On Monday, April 12, 2021 at approximately 2:04 pm, Decatur officers assisted with traffic control for a tractor- trailer that became stuck while attempting to turn southbound onto Commerce Drive from East Ponce de Leon Avenue. The trailer portion of the vehicle became stuck on the sidewalk during the turn. There were no injuries or damage reported during the incident. No citations were issued.”

Bender said it took awhile to get everything sorted out.

“Officers were on the scene for approximately 3 hours and 25 minutes,” Bender said. “There was a delay due to the wrecker service needing two larger sized rotator type tow trucks in order to remove the trailer without causing damage.”

It was one of a few traffic snafus in the Decatur area on Monday.

The largest source of local traffic congestion on Monday was a tanker truck crash that upended traffic on I-285, sending the driver to the hospital and leaving a huge mess.

The crash happened on Monday morning, April 12. The tanker truck carrying 7,500 gallons of diesel fuel crashed into a sign over the interstate, demolishing the sign and spilling an unknown amount of fuel onto the roadway. Until Monday evening, all southbound lanes by Memorial Drive were blocked and traffic was diverted to East Ponce de Leon Avenue towards Glendale Road and down Northern Avenue. The diversion led to gridlock in the Decatur area.