Details of individual HII regions in the Galactic Massive Star Forming region known as W49A. The image shows the 3.6 cm and 7 mm emission from the hot (10,000K) ionized gas found around a number of young, high mass stars. These radio frequency observations were made with the Jansky Very Large Array in New Mexico. Photo submitted by Chris DePree.
Share

These star forming regions are made up of dense clouds of gas and dust and it’s impossible to see them with optical telescopes. But radio telescopes can give researchers a glimpse inside the region.

“I love the idea that radio astronomy can kind of pull aside this veil,” DePree said. “There’s this veil that’s covering all these regions that we just can’t see with the best optical telescopes.”

Sometimes when people think of a star forming region, they think of the Orion nebula that is in the Orion constellation, DePree said.

The Very Large Array images show the shape and movement of giant clouds of ionized hydrogen gas formed by the intense ultraviolet radiation from young stars.

DePree studies the very early stages of star formation. He compared these regions to flowers and that the regions he studies are like a flower bud that’s closed up.

“Then you’ve got the flowers that have sort of opened up and we can see those optically,” DePree said. “Those are different stages of development and so it’s interesting to look at all of those and where I ended up with my research was looking at those very early stages of when stars form.”

DePree has been working on this research since about 1995. The proposal he and his team wrote in 2015 was to go back and observe the star forming region again to see if there had been any changes in the past 20 years.

“Some of the theorists we had been working with had run models that showed that there was some expectation that some of the sources could actually change,” DePree said.

He, his students and other researchers did the observations, again looking at a source called W49A, which is a star forming region in the Milky Way galaxy, that showed some change in brightness over 20 years later.

“The changes, we think, have to do with the fact that these stars are still accreting or basically gravitationally pulling in material,” DePree said. “As these accretion events happen, the brightness of the source can fluctuate.”

This newly discovered activity includes a narrow, fast-moving jet in one region, supersonic gas motions in three others, and an unexpected reduction in the radio brightness in another, according to a press release.

DePree said the changes appeared to be systematic and were associated with the brightest, smallest sources in the region.

“What we’re seeing when we see those fluctuations is changes in the environment of the star and that’s why we think it’s associated with the density of the region around it,” DePree said. 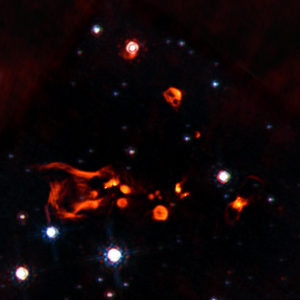 An image showing the regions of hot ionized gas (orange) surrounding massive young stars in the W49A Massive star forming region. The overlay of stars is from the Spitzer Telescope, sensitive to infrared wavelengths. The radio frequency observations were made with the Jansky Very Large Array (VLA) in New Mexico. Photo submitted by Chris DePree.

“They don’t ionize a very big volume,” DePree said. “The gas is ionized in a small volume right around the star and if there are fluctuations in the brightness of that volume of gas that tells us about the changing density of the gas.”

The most massive of the young stars in the cloud are hot enough to ionize the hydrogen around them and create regions called HII regions. As the hot stars move through different densities of gas in the cloud, they flicker between being able to ionize a large region and just a small region. If they are located in a dense cloud, the HII region will be smaller.

Once the young star forms a HII region, the stars put out so much energy that they start to disperse the cloud that created them. As the material is pushed away, the whole family of stars is exposed, according to massive star formation educational posters DePree developed with sixth grade teachers at Renfroe Middle School a few years ago.

“So, I would say, big picture, we’re trying to see these budding HII regions before they bloom into the regions we can detect with optical telescopes,” he added.

DePree will also be taking a two-year leave of absence from Agnes Scott College beginning in July as he joins the National Radio Astronomy Observatory Headquarters in Charlottesville, Virginia, he said. He will be working on protecting the radio spectrum and ways to make radio observing remain possible in an era of wireless devices.