Avondale Estates, GA — The garden clubs in Avondale Estates joined city officials on Friday, May 28, to place a commemorative wreath by the Blue Star Memorial Highway Marker in front of City Hall.

Blue Star Memorial Highway Markers pay tribute to the U.S. Armed Forces. The National Garden Club, Inc., started this program in 1945 after World War II. The blue star was used on service flags to note that a service member was fighting in the war. The program has been expanded to include memorial markers and byways since 1994, Avondale Estates Mayor Pro Tem Brian Fisher said.

The marker in Avondale Estates has been up since 2002, although it was replaced a few years ago after the original marker was hit by a vehicle.

“Each year the city of Avondale Estates, the Avon Garden Club and the Avondale Estates honor those who have served our country with a wreath laying ceremony held on the Friday before Memorial Day at the marker location. The garden clubs alternate the planting of the flower bed and the donation of the wreath,” Fisher said.

This year, the Avondale Estates Garden Club donated the wreath, which was made by one of their members, Tyler Weaver. The Avon Garden Club planted red, white and blue flowers at the base of the marker.

The garden clubs look forward to maintaining the marker and donating the wreath every year as a way to honor fallen soldiers and veterans.

Avondale Estates Garden Club President Peggy Burgess and member Susan Barton agreed that maintaining the marker is a way they can honor and show respect to military service members. Barton added that many members of the garden club are daughters of World War II veterans.

“[Friday was] all about honoring those who gave most of this life for our country and to all of what America stands for. We honor them. We thank them. That’s what Memorial Day is all about,” Burgess said.

The garden clubs place the wreath by the marker every year and have done so for about 10 years.

“It’s a remembrance of Memorial Day and Memorial Day is all about our fallen soldiers,” Burgess said. “We wouldn’t be here without them. We would not have the life we have.” 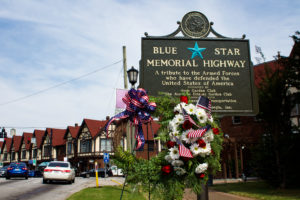 The garden clubs in Avondale Estates joined city officials on Friday, May 28, to place a commemorative wreath by the Blue Star Memorial Highway Marker in preparation for Memorial Day. Photo by Zoe Seiler.