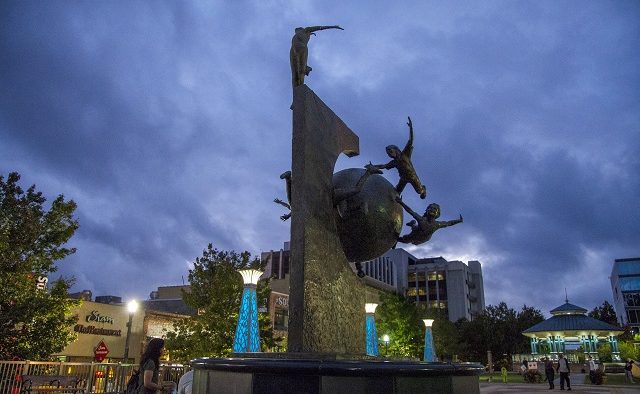 Decatur, GA — Decatur leaders are considering establishing a tax allocation district (TAD) in the downtown area to support the development of affordable housing and improved infrastructure.

The city already has one TAD for the area around the Avondale MARTA station in east Decatur, and a second one might be a useful tool to encourage the kinds of development the city needs in its central core, Geoff Koski, a consultant from KB Advisory Group told members of Decatur’s City Commission and Downtown Development Authority (DDA) on Monday night.

Speaking during a joint work session held by the two groups, Koski explained the basics of tax-increment financing (TIF), the more general term for what the state of Georgia calls tax allocation districts.

“The first thing to remember is that this is not a tax increase,” Koski said. “It is just a matter of how property taxes are distributed once they are collected. It is a mechanism to recirculate tax revenues on a site or in a district. Once you set up the TAD boundaries, all the future tax collections are going to be recirculated within that TAD for the amount of time that it is set up.”

When a TAD is set up, it uses the assessed value of the properties within the boundaries to set the “base value.” The property taxes collected for the properties’ base values will go into the city’s general fund both that year and all following years, but after the first year that the TAD is in effect, any increase in property tax revenue–as a result of rising property values–would go into the TAD fund.

It is that incremental increase in revenue that is captured by the TAD fund and used to pay for infrastructure improvements within the boundary or to incentivize development that the city wants to see there.

“A property owner within the TAD would not necessarily even know that there was one in place,” Koski said. “There is a note on the city tax bill, but in and of itself it does not affect their tax amount, but what happens to the money after it is collected.”

What can a TAD be used for?

The Georgia law allowing local governments to use TADs — the Redevelopment Powers Law — specifies that they are to be used for areas that are either suffering from blight, lack of investment or in need of infrastructure.

Few people would consider downtown Decatur to be either blighted or lacking investment, but the city could make the case that the lack of affordable housing is a problem and could even be considered necessary infrastructure, Koski said.

“The state has always said that they interpret the law liberally, and they want [governments] to use it to achieve their goals,” he added. “We have found that if the law doesn’t explicitly say you can’t use the TAD for the purpose, then it is allowed.”

TADs are used to support new development in two ways, Koski said. One, the city issues revenue bonds against the expected future growth in the TAD fund; two, the city could take a “pay as you go” approach and use the collected TAD funds to directly pay for infrastructure improvements or rebates or grants to developers who build or supply the targeted development.

Affordable housing developers will frequently use TIF financing as part of their “capital stack,” the layers of financing from different entities that are needed to fund large-scale construction, Koski said. The TIF funding both provides additional money and makes the project more attractive to banks and investors.

“Typically, in our consulting, we like to have no more than 10 percent of the funding for a particular project to be public dollars,” Koski said. “And usually the developer would need to meet what is known as a ‘but for’ test, meaning that they demonstrate that ‘but for’ the additional public investment, the development would not be built.”

One important caveat is that the revenues directed through the TAD would only be for portions of city taxes, unless the school district and the county agreed to participate in the TAD. This is in contrast to tax abatement programs for individual developments, Koski noted.

“Where a development authority may be able to grant a tax abatement that included portions of property taxes that would go to counties and the schools, this is not true of TADs,” Koski said.

The Redevelopment Powers Law does stipulate that no more than 10 percent of a city or county’s total property tax digest can be subject to a TAD. Since Decatur already has one TAD, the second one could not be so large as to put the total over 10 percent, Koski said.

During discussion, Commissioner George Dusenbury wondered whether Decatur was getting the cart before the horse with respect to planning in the downtown district.

“When I ran for City Commission, I campaigned on developing a master plan for downtown,” Dusenbury said. “We have not moved forward with that yet. Should we have a plan for redevelopment [of downtown] when we haven’t gone through the process of deciding what the community wants to see there?”

The city does expect to work on the downtown master plan once the city’s overall strategic plan update is complete, said Angela Threadgill, Decatur’s Director of Planning and Economic Development. But she also said she had questions about how the two efforts would effectively work together.

Typically, a city would want to complete any strategic planning process and have its updated goals for an area in place to feed into the TAD redevelopment plan, Koski acknowledged, but there could be good reasons Decatur might consider going ahead with setting up a district now.

“That is a good order of things, but it is not necessary – and, by law, does not have to happen that way,” he said. “With that big apartment building (Modera Decatur on redeveloped Bank of America site) about to be finished, it would be great to capture that revenue for the TAD … Sometimes, you have a situation of, ‘We generally know what we want an area to be, but we don’t have a master plan. But we know there is a big project coming out of the ground and it would be great to have that increment to feed development for the next 20 years.’”

Establishing a downtown TAD would not mean that the character of downtown would rapidly change, Threadgill added. “Even with a downtown TAD, we don’t anticipate everything being redeveloped within a short period of time. This would be a longer term plan.”

The city is currently working with the KB Advisory Group to define the proposed boundaries of a downtown TAD as well as the redevelopment plan that would guide what the funds would be used for, as well as a process by which the city would evaluate requests for TAD funds.

Before the city can designate a TAD, they must hold two public hearings and then the City Commission would need to pass a resolution authorizing it.