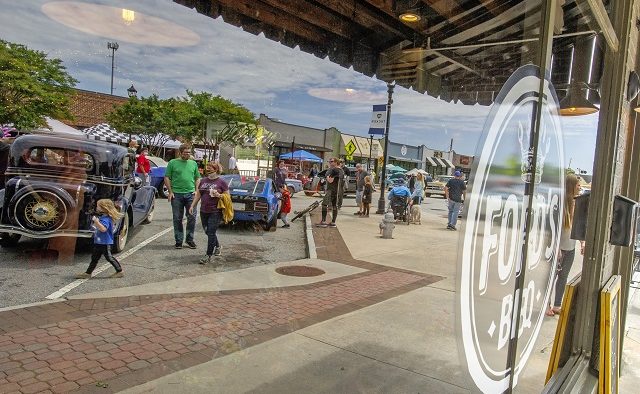 Main Street in downtown Tucker is reflected in the window of Ford’s BBQ during the Tucker Cruise-In on Saturday, May 8. Photo by Dean Hesse.
Share

Decatur, GA — Oakhurst is getting a barbecue restaurant.

Ford’s BBQ, a Texas-style barbecue restaurant in Tucker, will be open in the Matador Mexican Cantina space at 350 Mead Road. James Maggard owned Matador, which closed on May 6, and also owns Ford’s and Local No. 7 in Tucker and The Stratford Pub in Avondale Estates. Maggard doesn’t know when Ford’s will officially open in Oakhurst.

Maggard said the new Ford’s will keep some Matador favorites, like chicken soup, while adding a southwestern flare to other Ford’s dishes.

“Our mac and cheese will be cheese dip style mac n’ cheese,” Maggard said. “There’s street corn on there. The feel of it bridges the gap from what Matador has to what this place is going to be.”

He said Matador had a good run.

Ford’s has been open and operating in Tucker for about a year and benefited from the recent Cruise-In held in downtown Tucker.

He said Ford’s was in the works for about four years before it finally opened.

“It took a few years to put the pieces together,” Maggard said.