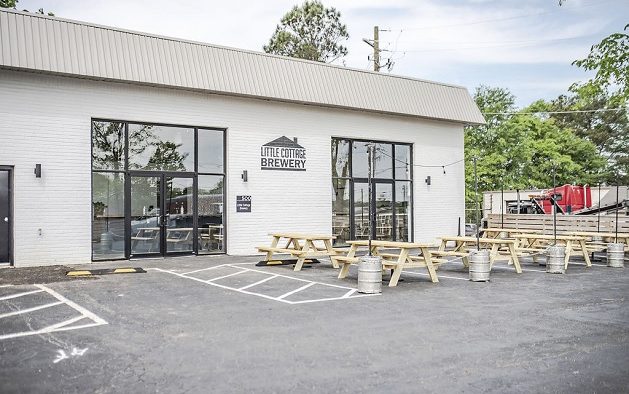 This story was provided by Southern Beer Tours

Avondale Estates, GA —  Little Cottage Brewery has announced their grand opening on May 15 and 16. There will be 5 time slots available for prepurchase at www.littlecottagebrewery.com. Tickets go on sale Saturday, May 8, at noon. Ticket price is $17 and includes three 5 oz pours. More available to purchase on site as well as to go beer. Expect Food Pop Up and free ice cream from Butter and Cream.

It is welcomed news for Dekalb County and Avondale Estates, which was just named USA Today’s Best Small Town Beer Scene. It joins Wild Heaven Beer and The Lost Druid Brewery in the area as well as Three Taverns Brewery, Sceptre Brewing Arts, and Twain’s Brewpub in nearby Decatur.

We first announced their intentions to open back in August 2020

Known for their barrel-aged beers, Little Cottage opens with a 3.5 bbl brewhouse at 120 Olive Street in a 2,164-square foot facility that will be an own-premise brewery. It will be the culmination of seven years of forethought for owner Jon Shari, whose love for brewing at home crafted a dedicated following.

“Starting Little Cottage Brewery has been on my mind for years,” Shari said. “There were times that I thought ‘yeah, I can do this’ and then other times I would just be discouraged by the sheer amount of money it costs to open a brewery and let that idea just fall to the wayside. With the signing of this lease, it has made this long time dream a reality. There’s no going back now and we will continue to press ahead as we still have a ways to go. I am truly excited to be able to do this, not only for myself but for all of you who have supported me and patiently waited for me to make something of it.”

Over the years, those who have tried Little Cottage bottles such as “Sun is My Destroyer” (a barrel-aged strong ale), “Metal Only” (barrel-aged stout), “More than Metal” (Metal only with vanilla beans), and “Burn all the Witches” (barleywine), have praised Shari’s talent and bottles quickly became highly sought after nationwide. In recent years, Little Cottage Brewery has poured at local festivals like Tinypalooza, Day of the Juice, Juice Strikes Back, Atlanta Cask Ale Tasting, as well as the Weldwerks Invitational in Colorado.

Little Cottage has also been involved with several highly-regarded collaborations, including “A Dark Offering” with Kings Brewing in California, “Telekinetic” with Cherry Street, “Allyship” with Newgrass Brewing Co. in North Carolina, and “Time Immemorial” and “Microcosm II” with Eighth State Brewing in South Carolina, the latter pair being two of the top-rated stouts of 2019.