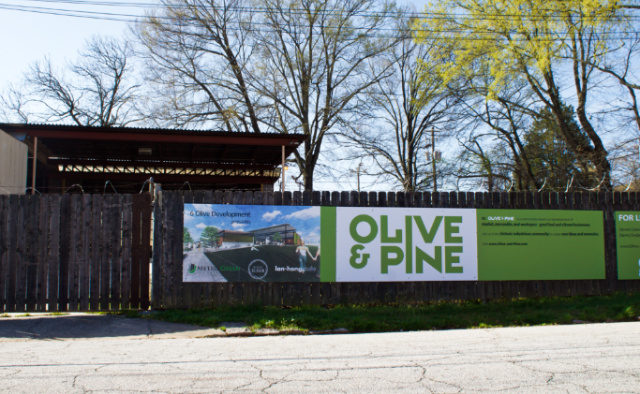 A new mixed-use development is planned for the former Mann Mechanical building in Avondale Estates. The $5.5 million development, named Olive and Pine, will feature office, retail and restaurant spaces and is expected to be completed by January 2022. Photo by Zoe Seiler.
Share

Avondale Estates, GA — A new mixed-use development is coming to Avondale Estates by early 2022. The $5.5 million development named Olive and Pine will feature office space and retail and restaurant spaces in the former Mann Mechanical building on Olive Street.

Chan said that the primary goal of the development is to keep the space affordable for tenants, according to What Now Atlanta.

Olive and Pine offers 25,000 square feet that will be mostly focused around a food hall in one part of the building. The developers are still working with potential tenants, who will determine the makeup of the retail businesses, said Danny England, principle of architectural firm Office of Design.

“We like creative types,” England said. “I think if we could curate a list it would be sort of creative thinkers and makers so that everybody sort of feeds off the same energy.”

Some examples would be a graphic designer, food vendors, or anyone who makes something. The developing firm, 6 Olive Development, will also be operating out of the space. The creative types fit into the area of Avondale Estates as Olive and Pine is located across Franklin Street from Little Tree Art Studios.

“We’re kicking around some ideas about how we can work together. We share a lot of street frontage between their development and our development,” England said of Little Tree Art Studios. “We want to kind of definitely feed off our neighbors and fit into the community there. It just kind of makes everything a little bit more robust.”

Olive and Pine is also located a couple of blocks away from the proposed town green project and construction is expected to begin on the site this summer. The town green project will feature a park and temporary commercial development along U.S. 278/ North Avondale Road.

“The [Olive and Pine] is a perfect complement to the town green project and will only make the mixed-use development that much more desirable,” Assistant City Manager Shannon Powell said.

England added that Avondale is transitioning from a sleepy neighborhood into an active small city and he’s excited to be part of that change.

“You get a few things like that happening and Avondale will be a very different type of place,” England said. “But when you start to add the active component with park space, an amphitheater, dining and breweries, it could be a fun little town.”

England was familiar with the building from the first time it went onto the market a couple of years ago and England was always intrigued by it, he said.

“It’s a really neat building. It’s got great character and good bones. It could be a really fun space to get into and do something with,” England said.

The Office of Design has done many adaptive reuse projects, like turning an old, industrial building into lofts, offices or food halls. He said there is a lot of opportunity in the building for the development team.

“There’s some great spaces. Every space has got kind of its own character,” England said. “The building wasn’t built at one time. It was added onto over the course of many years that the Mann Mechanical business was located there. So every time they added on, it has a little bit of a different feel to it.”

The building will more or less stay the same, England said. He added that the exterior will probably change in terms of signage and parking.

“Everybody we bring into the space as it is just loves it the way it is,” England said. “We’re for the part going to try to keep as much of that feeling as we can and work with it as is.”

Avondale is on the verge of evolving into having a more vibrant downtown feel and a little more buzz which made the city appealing to the developers, England said. His office is currently located on College Avenue in Decatur, so he was familiar with the area.

The developers are in the permitting process, working on their build out plans and were in lease negotiation with the first round of tenants in early April.

The biggest next step for Olive and Pine is to be more aggressive on the leasing front to fill the retail space. The developers hope to finish the project by January, possibly sooner, England said.

England is excited to see what the final product will look like and to see the building occupied and running. He’s also looking forward to being “a part of something that has that kind of vitality to it.”