Savannah native and photographer Andrew Feiler is showcasing a new exhibit at the National Center for Civil and Human Rights depicting the history of the Rosenwald school program. Photo by Zoe Seiler.
Share

Atlanta, GA — In the early 1900s Jewish businessman Julius Rosenwald and Booker T. Washington forged one of the earliest collaborations between Jews and African Americans. The pair created schools throughout the nation for Black children who didn’t have access to publicly funded schools.

From 1912 to 1937, the Rosenwald schools program built 4,978 schools for African American children across 15 southern and border states. Savannah native Andrew Feiler traveled to 105 of the school buildings with his camera in tow to create a comprehensive photo documentary of this piece of history.

The photographer’s exhibit “A Better Life for Their Children” is debuting this week at the National Center for Civil and Human Rights. The exhibit showcases 23 photos accompanied by stories and information about the schools and the time period. The exhibition accompanies his book of the same name which includes about 80 photos.

“There are two economists from the Federal Reserve who have done five studies of Rosenwald Schools and what their data shows is that prior to World War I there was this large and persistent Black, white education gap in the South and that gap closes precipitously between World War I and World War II,” he added. “The single greatest driver of that achievement is Rosenwald schools.” 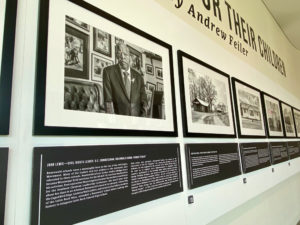 Savannah native and photographer Andrew Feiler is showcasing a new exhibit at the National Center for Civil and Human Rights depicting the history of the Rosenwald school program. The late U.S. Rep. John Lewis attended a Rosenwald school. Photo by Zoe Seiler.

During the Civil Rights Movement, Rabbi Abraham Joshua Heschel marched with Dr. Martin Luther King, Jr. from Selma to Montgomery. He famously described the experience by saying “I prayed with my feet,” according to the American Jewish Committee.

Earlier this year, U.S. Sens. Jon Ossoff and Raphael Warnock campaigned together for about two months leading up to the senate runoff races. They formed a political alliance and a seemingly close personal friendship, Feiler said.

Feiler’s work was a hybrid of photography and written stories. He wanted to create a photo documentary because photographs offer a way into the story.

“What my work is fundamentally about is using photography to bring people into important moments in our history,” Feiler said.

Washington and Rosenwald wanted a better life for their children and that became a focus of Feiler’s work.

“The Black communities, who had to dig deep to contribute to these schools, even though they were already being taxed to pay for white schools, they wanted a better life for their children,” Feiler said. “Collectively, they changed the course of history in this country. I think the central narrative of this endeavor, of this history is individual actions matter and for all of those folks marching for social justice, this project, this history is a message that your actions matter. You can change the world.” 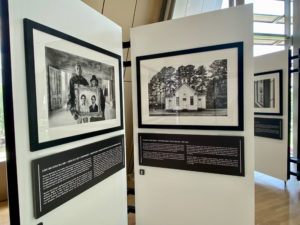 Georgia photographer Andrew Feiler spent years researching, traveling and photographing Rosenwald schools to tell the story of this piece of history. His exhibit is on display at the National Center for Civil and Human Rights until December. Photo by Zoe Seiler.

Early on, he knew this would be an amazing story. Feiler began the project by focusing on the outside of the schools and the architectural details like how many classrooms were inside. But he quickly realized that the outside wasn’t telling the whole story and that he needed to go inside the buildings to see their adaptive reuse.

Many of the school buildings are not used for educational purposes today and have been transformed into church halls, community centers and museums. Although, in order to go inside the buildings he had to ask for permission, which led him to meet the former students and teachers, preservation leaders and others behind the schools.

There were several hundred schools in Georgia, about 40 survive and of those four are represented in Feiler’s book, he said.

The National Center for Civil and Human Rights aims to look at the past and understand it as context for the continuing efforts towards true equity and rights, the center’s Head of Programs and Exhibitions Calinda Lee said. The exhibition highlights the educational inequity of the time period.

She hopes museum visitors will be inspired to think about what their own power is to change the world around them. She added that this exhibit is about solidarity.

The Rosenwald schools program is also a story of self-help and engagement, Lee said. The schools wouldn’t have been created without the tremendous grassroots community support over decades that accompanied the efforts of Rosenwald and Washington.

“Often those communities had very few resources and so their agency in understanding the importance of education for people who often didn’t have any and deciding to allocate really scarce resources to making that possible for themselves and for their children, and…generations to come,” Lee said. “That’s also enormously important.”

The exhibition will be on display in Atlanta until Dec. 12 and then will travel nationally, including to the National Civil Rights Museum, Tennessee State Museum, Charlotte Museum of History, Virginia Museum of History and Culture and the Museum of the Southern Jewish Experience.

The Center will launch the exhibition with a virtual program on Friday, May 21, at noon. The program will focus on historic and current educational equity issues. To register for this program, visit the Center’s website.