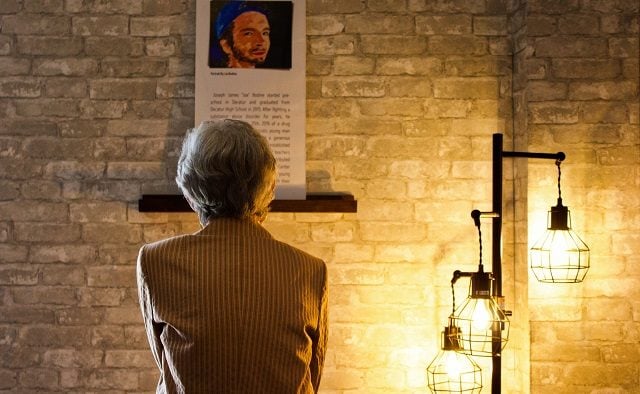 The Decatur Education recently renovated the student center which was inspired by Decatur High School 2015 graduate, Joe Bodine, who lost his battle with addiction in 2016. Bodine’s grandmother admires a portrait of her grandson that was drawn by her granddaughter, Lia Bodine. Photo by Zoe Seiler.
Share

Decatur, Ga. — About five years ago, the Decatur Education Foundation established Joe’s Fund, a behavioral health fund that was created to honor the life of Joe Bodine, a 2015 graduate of Decatur High School who lost his battle with addiction in May 2016.

Bodine’s mother, Lori Heemann, and other members of the foundation have worked for four years to renovate and improve the student center at Decatur High School. That dream came to fruition as Heemann, members of the Decatur Education Foundation and school staff cut the ribbon to the Decatur Student Center on Wednesday, May 5.

“My hope has always been that students and their families will find the help they need to prevent other tragedies from happening like what happened to Joe and thus my family and all that loved him,” Heemann said. “In my head, I’d like to think of this place as one of Joe’s hugs.” 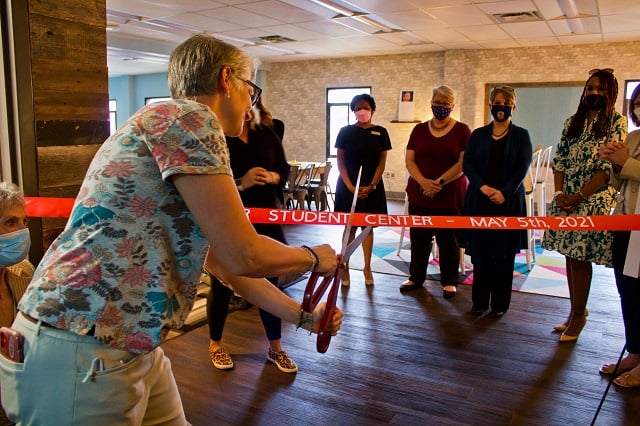 After Bodine’s death, Heemann had the idea to establish a safe space for kids and their parents to seek the help they need so other families wouldn’t have to go through a similar experience, Heemann told Decaturish.

“I just didn’t want him to die for no reason. I want something to come from it and so that’s how this got started,” Heemann said. “I hope they get the services that they need and that they find that they’re not alone in whatever they’re struggling with.”

DEF board member Lauren Pelissier was pulled into the project to design the space. She is an event planner and designer by trade, and most recently launching the new 42 West Entertainment Group.

She and the DEF created focus groups with students to ask for their input as to what they wanted from the space, what would make them feel good in the space and what would give them a safe space to hang out in, Pelissier said.

What she heard from the students was that they wanted a safe that felt like a coffee shop.

The student center is affectionately known as the Bluebird Cafe, an homage to the birds that remind Heemann of her son.

Some furniture in the student center comes from Ebrik Coffee, a local coffee shop that closed its physical shops in the spring of 2020.

Across the hall from the student center there are three individual counseling rooms and two group rooms.

Student art is also featured in the area with a student mural in the hallway. The ceiling tiles will eventually feature student art and Bodine’s sister, Lia Bodine, will paint a logo on a bulletin board in the student center.

Some of Lia’s artwork is already featured in the room as a portrait of Bodine is displayed on one of the walls. 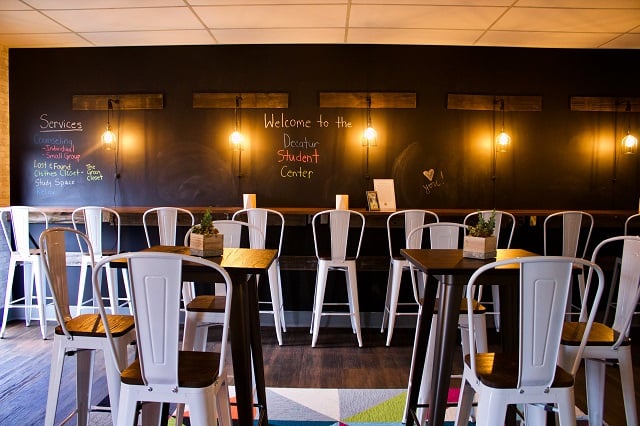 The newly renovated Decatur Student Center features various seating areas in the room, including many tables and chairs where students can work individually or in groups. The new space at Decatur High School was unveiled on Wednesday, May 5. Photo by Zoe Seiler.

Pelissier had many spiritual conversations with Joe while working on the room, she said.

“I didn’t have any music on or anything and I just sat with Joe in the room. Together we built the space so I truly believe that Joe is channeled through a lot of the stuff in here and I love your son,” Pelissier told Bodine’s family. “I know that he will live in this space for eternity as well as in the school district with everything you’ve done.”

“That really makes me happy,” Bodine’s grandmother said in response to Pelissier. “I miss him so much.”

Heemann said her son would have hung out in the student center and he recognized that everyone has challenges and vulnerabilities, most of all himself.

“He was always kind and giving to those who were struggling,” Heemann said. “The goal was a welcoming place with all kinds of programs and support for all kinds of students. I know Joe would be proud of what we’ve done here and happy to have been of some help.”

Students in attendance were excited to see the transformation of the space that used to be two big classrooms.

“It’s such a change from the last space. It’s so hard to believe that it’s the same space,” DHS sophomore Molly Peisner told Decaturish.

She hopes the space will be a nice break from the demands of high school. 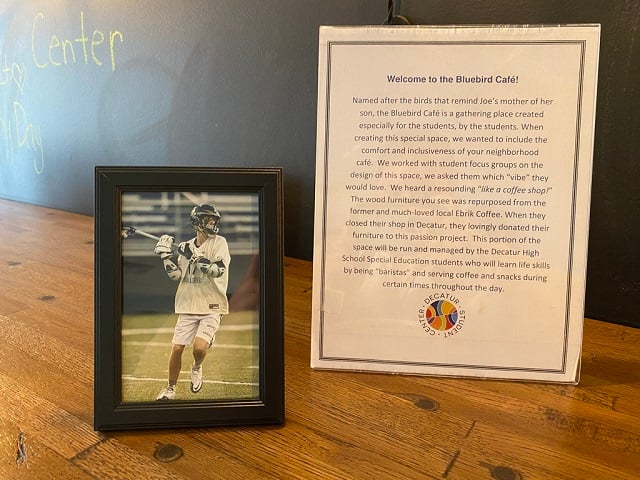 The Decatur Education recently renovated the student center which was inspired by Decatur High School 2015 graduate, Joe Bodine, who lost his battle with addiction in 2016. The student center is affectionately known as the Bluebird Cafe, an homage to the birds that remind Bodine’s mother of him. Photo by Zoe Seiler.

DHS sophomore Ivory Clarke added that the space is more alive than is used to be and it makes students happier. She hopes students will feel more comfortable asking for help and talking to someone when they need to.

During the ribbon cutting, Student Success Coordinator Dianne Andree said that students have described the space as warm, welcoming and calming.

“Our students, we know that they need support and they have talked about this as a safe place to come and that was when it just looked like a classroom,” Andree said. “In a world that is chaotic on any given day, but especially during this pandemic, I feel like our needs are going to be increased.” 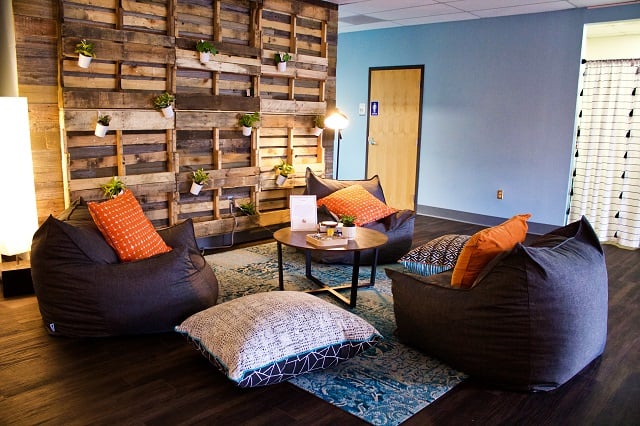 The Decatur Student Center features different seating areas in the room, including large bean bag chairs in front of a wall with plants, where students can relax and hang out. Photo by Zoe Seiler.

The space has also transformed into a K-12 initiative and the district is working on building a physical space for the middle school, Andree said.

“We’re going to continue to expand that support and continue to talk to kids because this space is for kids, designed by kids, to meet kids’ needs. That’s our goal,” Andree said.

Joe’s Fund, in addition to going toward the renovation, has gone toward bringing outside therapists to come to the student center and run groups, Andree added.

“These funds are being used in different ways to support adolescent mental health and addiction resources. Each year, DEF goes through a budget process in which the executive director together with the Director of Programs and Partnerships and the Board of Directors, determines the Foundation’s behavioral health goals for the year and allocates funds to support those goals,” the DEF website says.

The funds are granted to the City Schools of Decatur and other organizations and groups working to support kids’ health development. Donations can be made to Joe’s Fund through the DEF website. 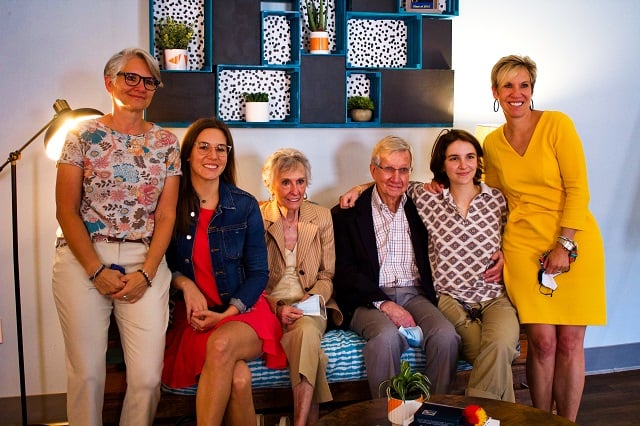 The Decatur Education recently renovated the student center which was inspired by Decatur High School 2015 graduate, Joe Bodine, who lost his battle with addiction in 2016. Bodine’s mother, Lori Heeman (far left) celebrated the ribbon cutting of the center with her family on Wednesday, May 5, at Decatur High School. Photo by Zoe Seiler.