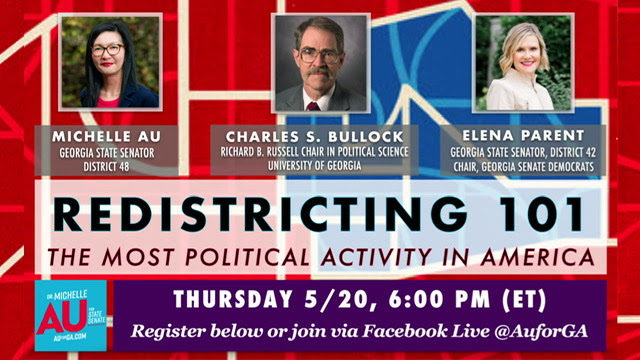 Atlanta, GA — State Senators Elena Parent and Michelle Au will be hosting a virtual town hall on Thursday, May 20, at 6 p.m. to discuss the upcoming redistricting cycle. University of Georgia professor and redistricting expert Charles Bullock will join the senators to explain the process, answer questions and provide information to prepare Georgians for what comes next.

The event will be held on Zoom and Facebook Live.

In the coming months, Georgia lawmakers will start to redraw the lines of the state’s legislative and congressional districts. The process happens every 10 years and will help determine control of the state government and its policies for at least the next decade, according to the Georgia Recorder.

The biggest factor impacting the map drawing process this will be the state’s changing demographics. Since 2010, Georgia’s population has increased by almost 1 million people to more than 10.7 million in 2020.

Bullock is the author of the book “Redistricting: The Most Political Activity in America.” He told the Georgia Recorder that redistricting “is an opportunity for map drawers to make the majorities safe and discriminate against certain groups that are growing in power.”

The Georgia legislature is responsible for using U.S. Census data to determine the new district lines. Local lawmakers, however, don’t expect significant change in DeKalb County but they are asking residents to pay attention to the process, Decaturish previously reported.

Parent has said before that it’s difficult to know how redistricting will affect the metro Atlanta are but she doesn’t anticipate major upheaval.

“There will be more population growth on a percentage basis in some of the more southern and northern outer counties, but I don’t think it will be as dramatic as it was in 2010,” she said

“I know there’s been population growth in my district, but my whole district was built out a number of decades ago. But we do have new developments,” she added.