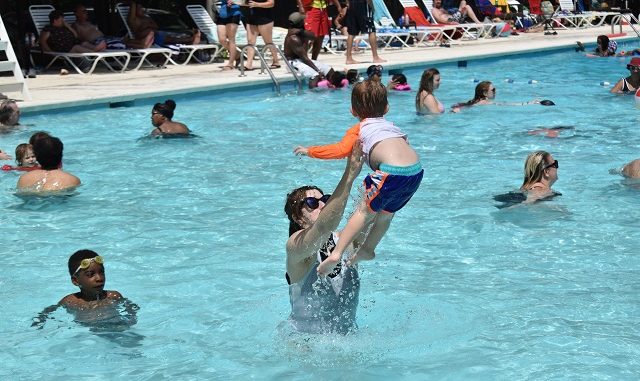 Here’s a look at news from the Tucker Observer, a new website from Decaturish covering Tucker, Clarkston and Stone Mountain.

“We are making final preparations to the pools at Kelley Cofer and Rosenfeld Parks,” Tucker Operations Manager Jason Collins said in a press release.  “The pools have never looked better. With proper social distancing and new amenities, we think patrons are in for a real treat.” 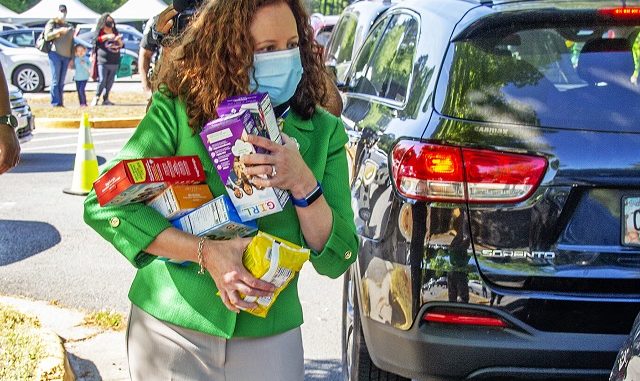 Clarkston, GA — On Saturday, May 1, DeKalb County partnered with the Girl Scouts for its Mother’s Day 2021 food distribution event.

The county purchased 20,000 boxes of Girl Scout Cookies to support local troops and add a sweet treat to the 3,600 COVID-19 Care Baskets distributed to citizens at 4 drive-up locations around the county. 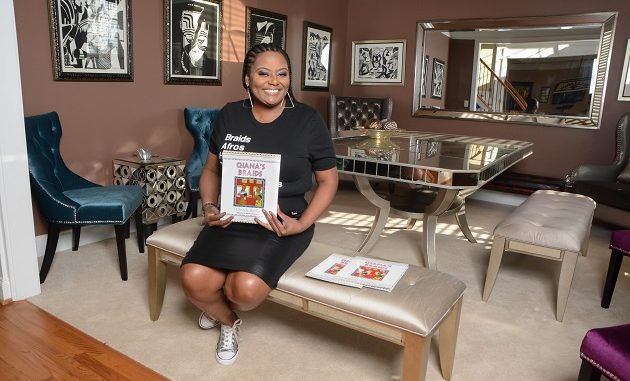 The book is about a little girl named Qiana who gets her hair braided for the first day of school. The story celebrates diversity and highlights the love and passion that happens in a Black beauty salon. Qiana’s Braids was inspired by the lack of representation of Black girls and their hair stories in children’s literature. 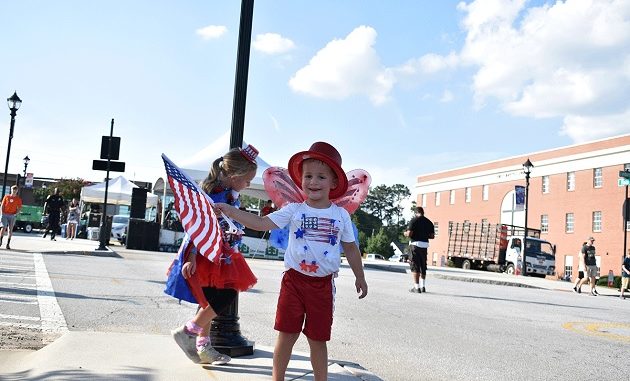 Photo provided by the city of Tucker

Tucker, GA — The city of Tucker is hosting in-person TKR Summer of Fun events this year.

The events were virtual last year due to the COVID-19 pandemic. Summer of Fun first launched in 2018. 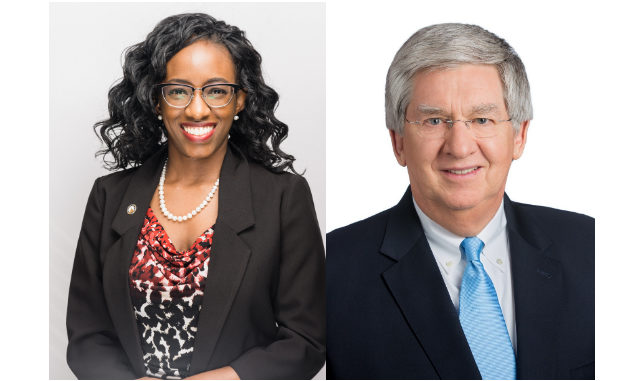 Atlanta, GA – Oglethorpe University will honor the graduating classes of 2020 and 2021 during two ceremonies to be held on subsequent days on the historic Brookhaven campus, a press release said. The university will welcome two prominent Atlanta leaders to address the graduates.

Retired Atlanta Federal Reserve President and Chief Executive Officer George C. (Jack) Guynn, who has served as an Oglethorpe trustee for 25 years, will address the Class of 2020 on Sunday, May 23, 2021 at 9:00 a.m. The Class of 2020 commencement ceremony was previously postponed due to pandemic restrictions.

Georgia State Representative Dar’shun Kendrick, an Oglethorpe alumna, will address the graduating Class of 2021 on Saturday, May 22, 2021 at 9 a.m.

DeKalb County, GA — A safety training held by DeKalb County Police Department on May 4 taught situational awareness and what to do in case of an active shooter situation, a problem officers said is becoming more prevalent.

DeKalb County native, Sgt. J.K. Walker has been giving active shooter presentations for eight years. Walker said the “avenger mindset” is increasingly found in gunmen who have recently experienced a break-up or workplace discipline, or been fired from their job.

“They have resolved, ‘I am going to come back and do something about it,’” he said, describing an avenger profile. “They’re going to take matters into their own hands.” 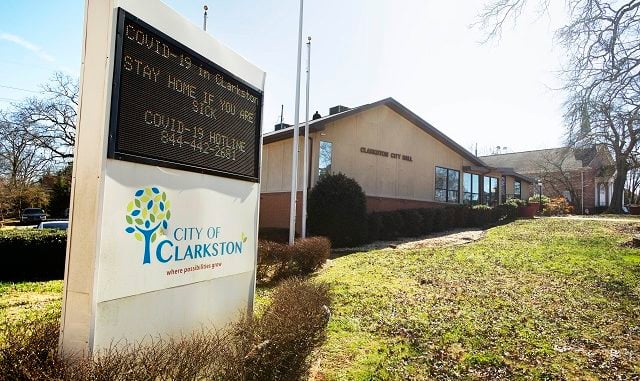 Clarkston, Ga. — The Clarkston City Council narrowly approved an ordinance amendment to allow retail delivery shops to sell and deliver packages of beer, wine and malt beverages. Mayor Beverly Burks broke the tie in the 4-3 vote, which is her first vote since taking office.

The change adds a fourth category for new licenses permitted for certain designated businesses. The following language will be added to the ordinance, according to the agenda packet, “Retail Delivery Shop means a retail establishment, which is engaged in the retail sale of food products, household goods and other sundry items for delivery only, that has a total interior floor area of not more than 10,000 square feet.”

The amendment was approved with two additional terms that there will be a trial period from August 2021 to December 2022 and that a retail delivery shop cannot host in-person events.

Clarkston will phase out single use plastics in government buildings

Clarkston, GA — The Clarkston City Council on May 4 approved a resolution to stop purchasing single use plastics and polystyrene for use in city buildings.

The resolution gives the city a year to phase out purchasing and use of these products in favor of sustainable alternatives, a press release says. Similar measures have been passed in Fulton County and the city of Atlanta. 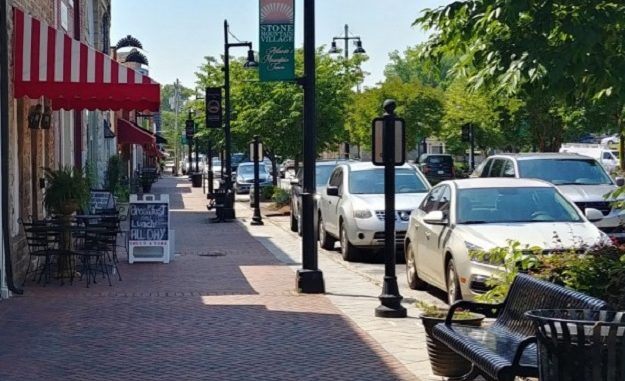 But if you park along the streets of the city next to it, you don’t have to pay anything and can walk into the park from there. The Stone Mountain City Council is considering adding metered parking to city streets to deter this practice and to ensure that people visiting Stone Mountain patronize the city’s businesses. 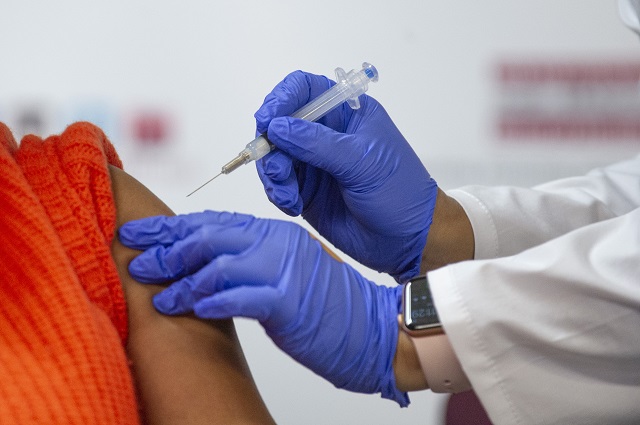 FILE PHOTO: The DeKalb County Board of Health received 2,500 doses of the Moderna COVID-19 vaccine and began vaccination of Board of Health frontline workers on Dec. 31, 2020 to be followed by long-term care facility residents and staff, and EMS personnel. Photo by Dean Hesse. 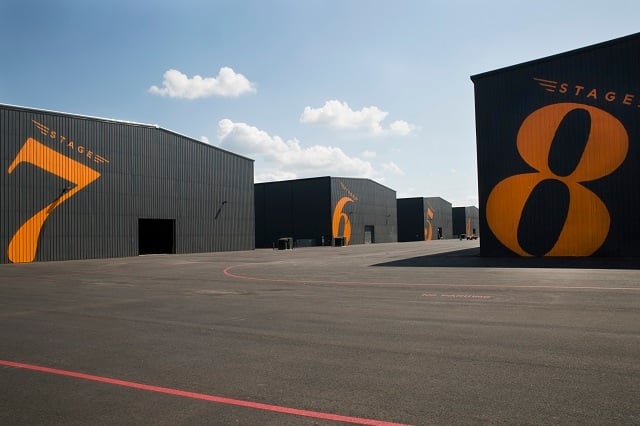 Blackhall Studios in DeKalb County. According to the website for the company, “Opened in 2017, Blackhall Studios offers complete services for all types and sizes of productions – from small independent films to scripted television series to tent pole movies.”

Stop the Swap, a group born out of the threat to swap land in South DeKalb County, said the last two years have been riddled with lies.

Last week, Millsap announced he was selling Blackhall Studios to Commonwealth Group, a Los Angeles private equity firm, for $120 million with no promise for community engagement. That leaves an open questiona bout whether the promises Blackhall made will come to pass. 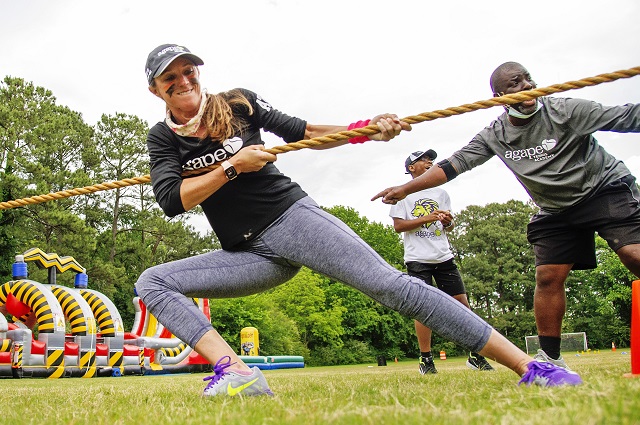 Amy Pazahanick from the Agape Tennis Academy team competes in the tug of war during Adult Field Day at the Tucker Recreation Center field on Saturday, May 8. Photo by Dean Hesse.

Tucker, GA — Adult Field Day returned to Tucker on Saturday, May 8 after being cancelled in 2020 due to the pandemic. The first field day was held in 2019.

(PHOTOS) The return of the Tucker Cruise-In 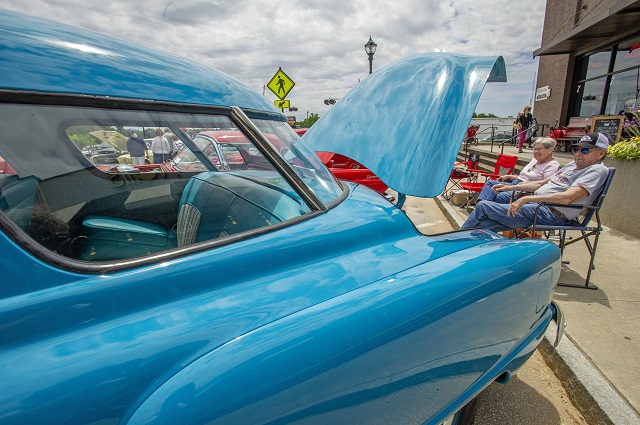 Paula and Fred Martin of Conyers brought their 1950 Studebaker Starlight Coupe with a 291 DeSoto Hemi to the Tucker Cruise-In on Saturday, May 8. Photo by Dean Hesse.

Tucker, GA — The Tucker Cruise-In returned to Main Street on Saturday, May 8 for the first time since October 2019.

“I think we got a (good) turn out because I believe everybody here has just got cabin fever,” said Wayne Hicks from the Tucker Cruisers.

Organizer Gene Cofer said 120 vehicles had registered for the day. A change to an earlier time to avoid conflict with evening restaurant traffic didn’t deter the crowds who came out to enjoy the pleasant weather and wide array of vehicles. 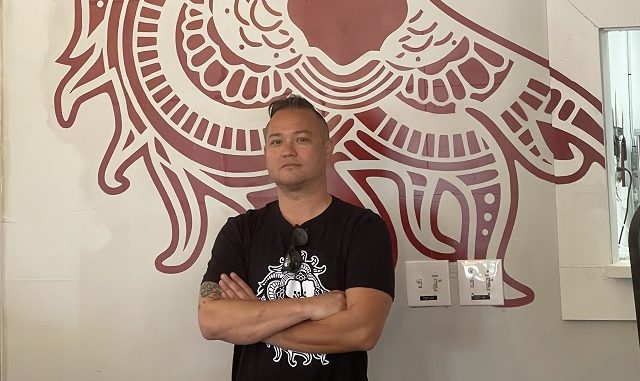 The restaurant will open May 24 in a restored building at 975 Main Street. Hartnett, a Stone Mountain native, said he “fell in love with” the spot, which dates back to 1895.

“The place is gorgeous,” he told The Tucker Observer. “I’ve got some old photos of the property that are incredible. We’re the oldest property in Stone Mountain.” 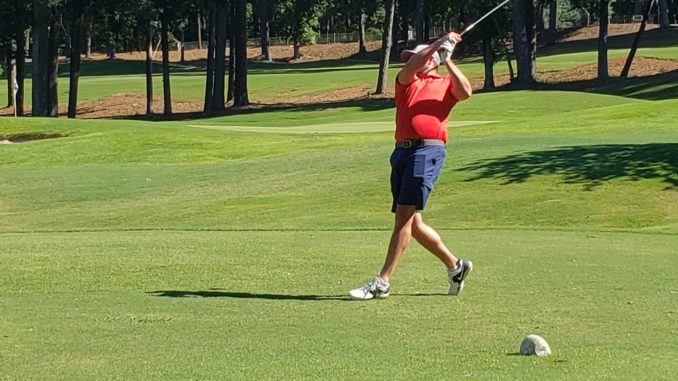 The Rotary Club held the event on April 26 at the Smoke Rise Country Club.

DeKalb County, GA — This year has been a challenge for educators everywhere.

But in spite of the obstacles, these DeKalb County Schools employees have excelled. The school district recently announced its employees of the year. 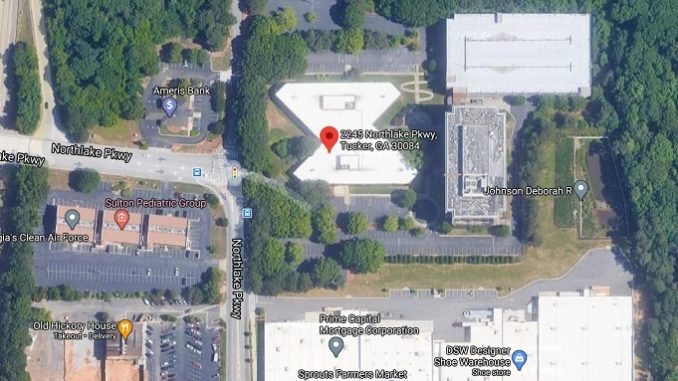 A map showing the location of 2245 Northlake Parkway, a site slated for a future town home project. Image obtained via Google Maps

Tucker, GA — Metro Atlanta’s real estate crunch is prodding developers to think outside the box. Companies are allowing employees to continue working from home, leaving office space unoccupied. At the same time, a shortage of building materials cannot keep up with the demand for new housing.

During the past six months, available office space in Atlanta jumped from 2.5 million square feet to a little over 6 million square feet according to CoStar Group, a real estate developer. That’s an increase of 88% since January 2020, the AJC reported.

Developer Steve R. Martin, owner of SDM Partners, purchased a Northlake office park in October 2017 for $41 million. To him, changes in Atlanta’s real estate market means shifting to build a live/work property in a central location. 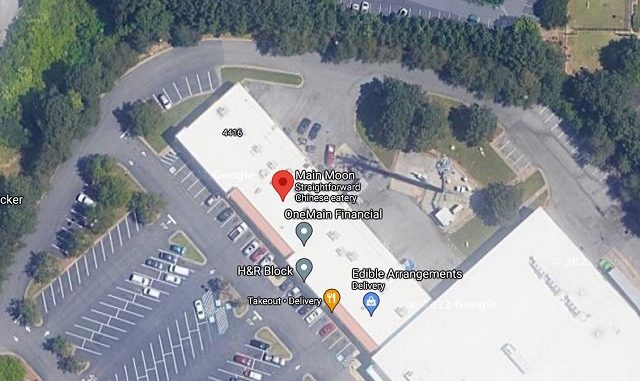 The location of Main Moon in Tucker. Image obtained via Google Maps

Tucker, GA — The manager of a popular Tucker Chinese restaurant died on May 11 following an explosion in the kitchen. 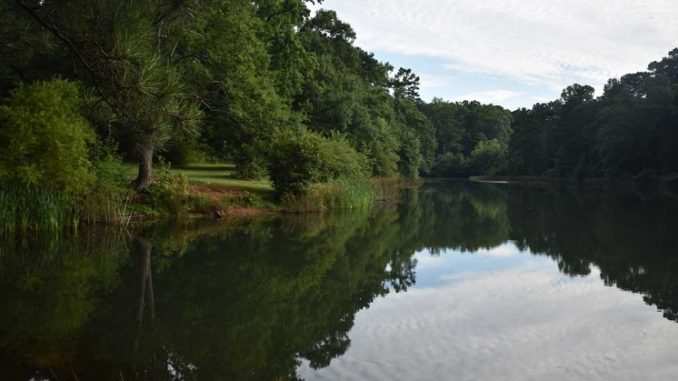 Twin Brothers Lake. Photo obtained via the city of Tucker.

Tucker, GA — DeKalb County has long put off repairs to Twin Brothers Lake in Tucker, an area suffering from erosion, flooding and overgrowth.

The lake is in Johns Homestead Park located at  3071 Lawrenceville Hwy.

A report commissioned by DeKalb County shows an urgent need to address years of seepage in the dam and problems with the spillway, and Tucker staff is trying to help find money for the project.

Decatur, GA – The opportunity to turn yourself in on a misdemeanor charge in DeKalb County and get an immediate bond is still a reality, a press release announced. The DeKalb County Jail’s “Warrant Relief” program will continue to be held each Tuesday, Wednesday, and Thursday through the end of May.

“It’s understandable that people are apprehensive about turning themselves in to law enforcement authorities under any circumstances,” says Sheriff Maddox. “Those who did, however, realize the advantage of being able to get on with their lives while they wait for their day in court.” 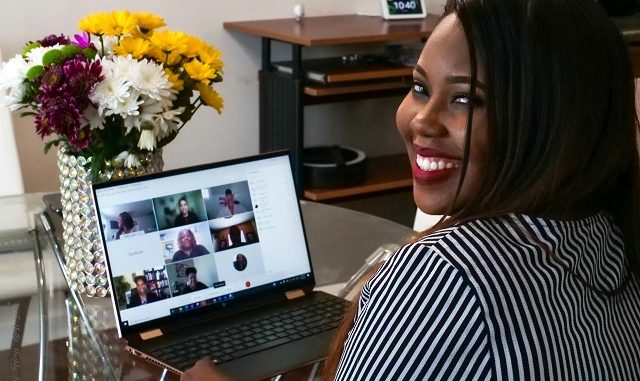 Photo provided to the Tucker Observer.

Scottdale, GA – Scottdale Early Learning (SEL), a 501(c)3 early care and educational organization serving low and moderate income families in DeKalb County, has received a $10,000 grant from the Georgia Department of Early Care and Learning (DECAL) to explore and begin to address the issues faced by students who are parents, a press release announced. 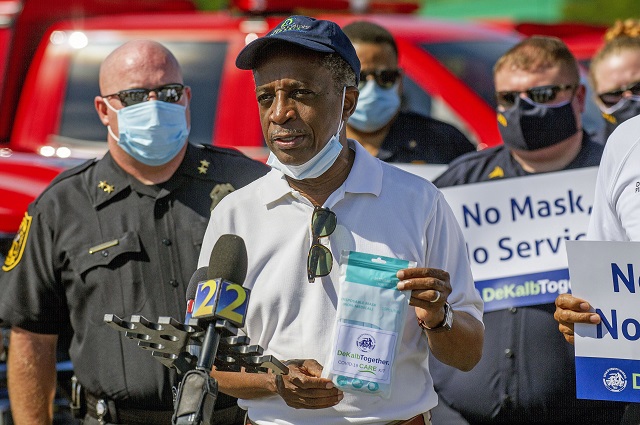 DeKalb County CEO Michael Thurmond briefs the press at Wesley Chapel Square shopping center in greater Decatur July 25, 2020 to announce DeKalb police, fire and code enforcement personnel would begin distribution of 20,000 masks and “No Mask, No Service” signage to small businesses throughout the county as part of its ongoing “Stop the Spread” campaign. Photo by Dean Hesse.

Decatur, GA – DeKalb County has launched an effort to develop its 2050 Unified Plan, a press release announced. This plan will combine two long-range strategic documents into one: a Comprehensive Transportation Plan which identifies priority transportation projects and policy recommendations, and a Comprehensive Land Use Plan which establishes the framework for future growth and development.

The combined plan will create a more consistent, unified strategy for the county and also will address arts and culture, housing, health and wellness, public safety, sustainability, retail, and annexation policies.