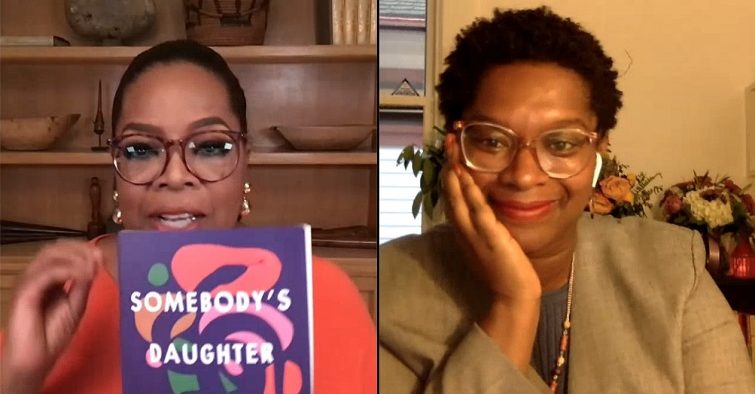 Ford is a writer, host and educator who lives in Indianapolis, Indiana. She is the former host of The Chronicles of Now podcast, co-host of the HBO companion podcast Lovecraft Country Radio as well as the interview series PROFILE by BuzzFeed News.

Oprah introduced Ford’s book by saying that it “illuminates the tenderness and toughness of growing up.” She noted that Ford’s memoir highlights the coming-of-age experiences of Black women, no matter their generation.

“Somebody’s Daughter: A Memoir,” a New York Times bestseller, explores Ford’s experience of Black girlhood while dealing with an emotionally fraught relationship with her mother, an incarcerated father, and reeling from a sexual assault that she wishes to keep to herself. When her grandmother reveals the truth about her father’s incarceration, Ford’s entire world is turned upside down.

In the discussion, Oprah and Ashley Ford bonded over their experiences of learning to grapple with trauma. Oprah was born into poverty and was raised by a single mother. Oprah has also recently released a book on dealing with trauma, entitled “What Happened to You?”

In discussing her mother’s emotional issues, Ford said, “I was always trying to figure out which version of myself to be to not upset her, and I didn’t often get it right.”

“We, growing up, often just felt like we were in the way — and you were just doing everything you can to get it right with her. You are speaking to so many of us, like, “Can I get a witness out there?” Oprah responded.

“I think the most underserved and misunderstood demographic in the whole world is children,” said Ford. “Children get treated as an inconvenience, not only as a familial dynamic but as a societal dynamic. … If we listened to [children], watched them, learned from them a little bit more, we’d all be a little bit happier, and have a happier planet.”

Ford describes herself as a “big pop culture kid,” and said she found hope in narratives of adults who enjoyed their lives and weren’t in a constant state of self-punishment. “I knew that there were people out there who were living lives that made themselves ultimately happy,” she said.

Oprah and Ford talked about the culture of punishment they had both grown up in, the feeling that they were not allowed to genuinely make mistakes. “It messes up how you see other people,” said Ford. “People would do things where I think, ‘that’s not a big deal,’ but I would react to it like it was massive … I struggled to have compassion for other people when they made mistakes.”

“I thought I could hate things out of myself. I thought, if you hate a part of yourself enough, you can change it,” Ford said. “That’s not true. You can only love yourself into a different place. … It took a long time for me to figure out that I am worthy of compassion whenever I make a mistake, that I am worthy of second chances.” A major idea that came to Ford while coping with trauma was, “We’re not going to be OK if we don’t talk about what hurts.”

Ford said that, initially, she didn’t feel shame about her father being incarcerated, but eventually others in her community taught her to feel shameful. “I didn’t think it said anything about me or my family, it was just a fact. It wasn’t until a teacher called my mom because she didn’t know what I meant when I said, ‘my dad is in jail.’ … After that, my mom told me, “You don’t tell people that anymore, I would rather you say that you don’t know where your dad is.”

“My dad made a terrible, evil choice, twice,” Ford said. “I have to consider that when I think about him as a person. But I know all of these other things about my dad that don’t exactly line up with that moment, except for the fact that he was a human being.”

“To me, he was this fantastic person out there who said these wonderful, beautiful things about me, but to a couple people out there, he is the monster in the dark. He is the worst thing, possibly, that has ever happened to them. … Even if I can’t reconcile those things in their complexity, all of those things are true at the same time.”

A pivotal moment in Ford’s book is depicted in the imagery of a snake on the cover. There were many garden snakes in the field on her grandmother’s farm, and to get rid of them, her grandmother set them on fire. “I thought that they would scatter as soon as one of them was on fire or when the fire began, but they didn’t — they held each other tighter. They became like a knot, they just squeezed into each other, and I’d never seen anything like that. There was no survival in their reaction. It was an acquiescence, it was a letting go and a holding tight to where they already were — to, in my mind as a child, their family.”

Her grandmother said that the snakes loved each other, and she told Ford, “Our family is like that, that we hold on to each other even when we’re burning alive.”

“Somebody’s Daughter: A Memoir” by Ashley C. Ford can be purchased from Charis Books & More.