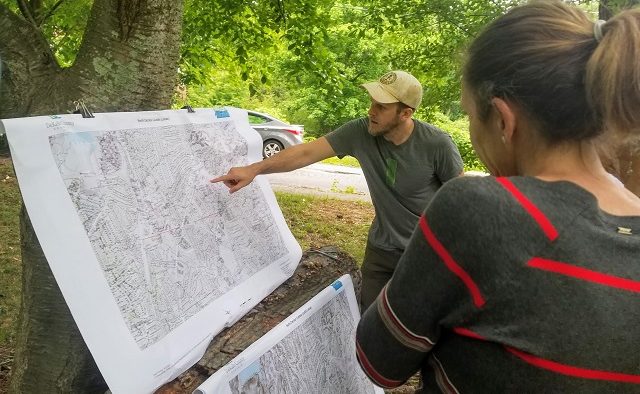 Decatur, GA — In the 20 years that Diane Scagnelli has lived in her Willow Lane home, she has joked that she could float a kayak down the creek that flows through her backyard. But it wasn’t until a hard rain earlier this month sent a rushing stream flowing through her front yard that she thought it might really be possible.

“I have never seen it like that before,” Scagnelli told Decaturish recently. “Usually, if there is water overflowing the creek, it is standing in puddles in the back. But this was rushing water moving very fast.”

Scagnelli was one of a group of neighbors who met with Decatur City Commissioner Kelly Walsh and DeKalb County Commissioner Ted Terry last week to walk along the street and see the damage caused by flooding that occurred after a severe storm on May 3.

The problem, residents say, is that increased runoff due to development along North Decatur Road and Scott Boulevard is overwhelming outdated stormwater management systems in the area. Segments of both roads are inside the City of Decatur, with the remaining sections in unincorporated DeKalb County.

Flooding along the two small creeks that run through the neighborhood has been an issue in previous years, but this year the flooding did not come from the streams, but the higher ground around them.

Nick Deuson, who also lives on Willow, took video footage featured by a local TV station of water running along the street more than a foot deep in some places.

“The kids’ [school] bus stop is right there,” he said. “If we had kids out here at that time, it could have been a very dangerous situation.” 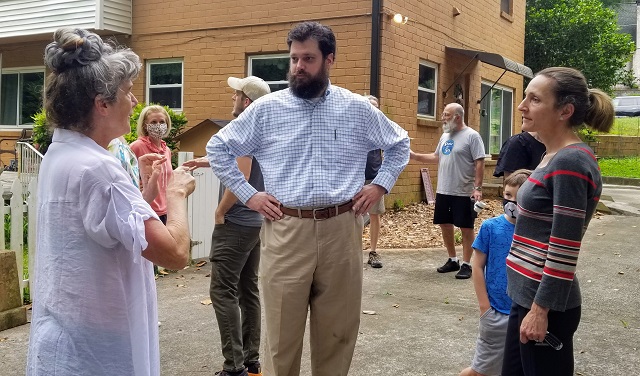 Currently, there are no storm drains along the portion of North Decatur Road inside the city limits. The city intends to install a system to capture stormwater along the road and channel it away from houses to discharge into the south fork of Peachtree Creek where it runs under the roadway near the intersection of Superior Avenue.

The project is Tier A priority project slated for improvement within five years.

As for the drainage issues in areas outside the city limits, those are the county’s responsibility, said Ted Terry, DeKalb County Commissioner for District 6, which includes the neighborhood. He will investigate what plans are currently in place for the county segments of North Decatur Road and Scott Boulevard, as well as whether the stormwater detention measures implemented at the new developments at Suburban Plaza and the Point on Scott apartments.

The county is beginning the process of updating its own stormwater master plan, as well as planning updates to its stormwater utility fees, which have not changed in 20 years, Terry said.

“We have the fees set at $48 [annually] per equivalent residential unit or single-family dwelling unit, which is not enough to address the needs that the county has,” he said.

In addition to adopting a new stormwater master plan, the city of Decatur also recently updated its stormwater utility fees, which had been unchanged since 1999, Commissioner Walsh noted. Under the new structure, the amount charged is based on the amount of impervious surface at each property, instead of a flat fee per residence or commercial building.

“Stormwater doesn’t recognize city limits, so it’s important that we [in city government] work collaboratively with the county on issues like these,” she added. “We just went through this process of identifying problem areas and what our capacity is and what needs improvement, as well as how we can fund it. I hope that this is information that can feed into the work that [DeKalb] will now be doing.”