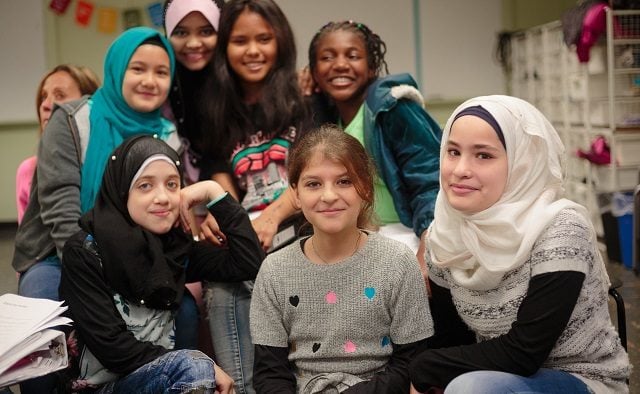 Like many students across the country, Lucia, a middle school student in Decatur, spent the past school year online. She worked with her classmates to solve the math problems projected across her screen. She discussed current events with her morning advisory group. She even wrote some songs as part of a student-led songwriting club that formed during the pandemic and met via Zoom.

Smart, full of energy and wearing a perennial smile on her face, Lucia looks like an average American teenager. But her story diverges from that of the average American student in many ways.  Her family originates from the Democratic Republic of Congo, but fled in 1996 to escape the violence and upheaval of the First Congo War.  They settled in a refugee camp in Tanzania, where Lucia was born, and lived there until entering the U.S. as refugees in July 2019. In the fall of 2020, Lucia enrolled at Global Village Project (GVP) in Decatur. GVP is the only school in the country dedicated to meeting the educational needs of recently resettled refugee young women and preparing them for high school.

The UN High Commissioner for Refugees estimates that there are 26.3 million people worldwide like Lucia and her family who have been forced to leave their homeland to escape war, persecution, or natural disaster. When at last many of those families can seek refuge in the U.S., they are likely to find that their children face obstacles to receiving an equitable education. Newcomer students are typically placed in classrooms according to their age, despite the fact that their academic experiences—which often include periods of interruption, and in some cases, having never before attended school—have inadequately prepared them to succeed at age-based levels. The founders of GVP recognized these and other disparities; for example, young women often have additional responsibilities for family support inside the home, and face the dual challenges of learning English while becoming proficient in academic subjects. But at GVP, with an educational model that is designed around the multifaceted needs of young refugee women, we see our students and alumnae thriving both within and beyond the classroom.

Lucia’s teachers quickly recognized her academic strengths and dedication to the classroom. They noted that she was eager to raise her hand to answer questions and help other students, too. So when she started showing up regularly to afternoon help hour—an unstructured opportunity for students to ask questions and get help from teachers with their homework—they were puzzled. Each time, they asked if she had a question or if they could help with anything, and the usual response was “no.” But she enjoyed talking about her day with other students and her teachers. She liked to experiment with Zoom backgrounds and special effects and joke around. It occurred to the academic team that this was Lucia’s way of engaging in and becoming part of the community, an essential part of GVP that had been challenged during the pandemic, but ultimately evolved to include new modes of engagement and connection.

Lucia’s story helps explain the magic of GVP. With a quality education designed to remove the barriers faced by refugee young women and create the conditions for them to succeed, GVP alumnae aren’t just ‘getting by’ academically; they thrive in the classroom. They aren’t just making it to high school; they are excelling in their studies, taking on leadership roles within their schools and communities, winning scholarships and awards, graduating with honors, going to college, and starting their careers. When refugee families arrive, they are, in many ways, starting their lives over. A quality education for their children becomes an anchor point to achieving their dreams and building a new home.

As GVP’s School Support Specialist, Crispin Wilondja, put it, “No one chooses to become a refugee; becoming a refugee is about surviving. There is a gap between a real refugee and what is depicted in the news. I dream that these girls will change the American mind, so that people can say ‘when we see refugees, we don’t see a threat – we see a friend, a human being, people who will contribute to this nation.”

This year, in conjunction with World Refugee Day on June 20th, GVP is honoring the millions of folks like Lucia who have encountered extraordinary challenges in their journeys to the U.S., but are writing and redefining their stories every day. From June 20 – 26, we invite you to “Walk with Her” as we share both virtual and on-location experiences to help you learn more about the story of a GVP girl and her family. To learn more about how you can get involved, read more about GVP at www.globalvillageproject.org, and make a donation to support our mission today at bit.ly/GVPWorldRefugeeDay2021.