A conceptual drawing of the updated plan for the new mixed-use development at East Decatur Station. The perspective is from New Street. Image obtained via the city of Decatur.
Share

Decatur, GA — The Decatur Development Authorities, at its June 11 meeting, recommended that update plans for the East Decatur Station project be approved.

Plans to redevelop the area along College Avenue between Sams and New Streets was approved by the Decatur Planning Commission in December 2020.

The Charlotte, NC-based developer Northwood Ravin intends to build a 400 apartment community with a mix of restaurants, shops and a large coworking space on the six-acre property. If completed, the project would be the first residential development in Decatur to come under the city’s new mandatory inclusionary zoning requirements, Decaturish previously reported.

“In keeping with Decatur’s ordinance, we will reserve 10% of the units for residents with incomes at or below 80 percent of AMI [area median income],” Ben Yorker, Northwood’s vice president for development, said at the meeting on Dec. 8, 2020. “These units will be distributed throughout the site and across all housing types.”

The affordable housing units will be scattered throughout the development, which is a requirement of the inclusionary housing ordinance, Planning & Economic Development Director Angela Threadgill said.

Original plans for the development called for a mix of one, two and three-bedroom units that surround a parking structure in the interior of the site. The developer will also construct a new section of Freeman Street that will run along the southern edge of the development, connecting Sams and New Streets. 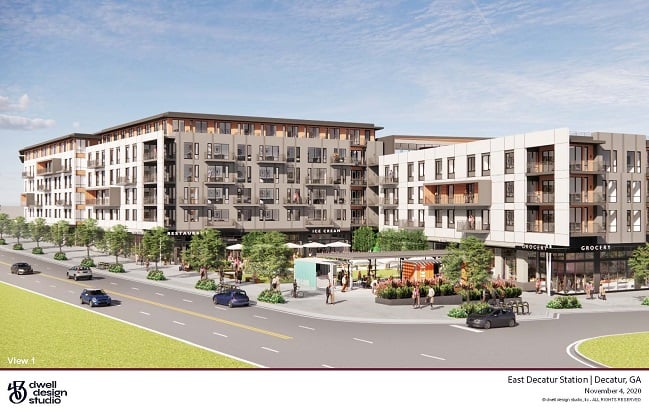 An original conceptual drawing of what the new mixed-use development planned for the current East Decatur Station site will look like. The perspective is from College Avenue facing southeast. Image obtained via the city of Decatur.

At the June 11 DDA meeting, Yorker gave an update on the project as some details have changed. The project will still have 405 apartments and some retail space. The developer has not requested any additional exceptions.

“We did start to see some common themes coming together when we talked to these groups so we began looking at how we can reconfigure the project to satisfy and bring in some potential retailers that we thought would be attracted to the area,” Yorker said.

Yorker hopes to bring a small grocery store or a business with prepared foods into the bottom level of the space. The goal is that the grocer will further catalyze retail activity in the area and make the space walkable.

If a grocery store does not occupy that space, the developer plans to fill the space with other retailers and priority would be given to the businesses that are currently on the site, Yorker said.

The seven acre site includes properties at 114-134 New Street, and 715-747 East College Avenue. These businesses include Jazzercise Decatur, iWag, and Project Slide. The project runs along the property line of 141 Sams Street but the existing building will not be impacted by the development.

One change to the configuration of the building is limiting the areas that have a bridge over a thruway. In the first version of the plans, the building bridged over a woonerf, which is a road in which devices for reducing or slowing the flow of traffic have been installed.

“In this case we remain entirely on one side of the woonerf but the other side of that that’s really, we think, appealing for the area and for the community is that in so doing we can kind of leave the parcel or piece of land on the other side of the woonerf kind of undeveloped,” Yorker said. “We can design it and build it into a public park and dedicate it to Decatur if that’s how Decatur wants to handle it.”

The park area would start to create a public space that is central to the east Decatur area and the park would be across the street from existing retail, which Yorker said is a perfect location to have a civic or park amenity.

“It can really benefit the existing businesses and existing retail there and improve the community,” Yorker said.

There will still be at least one bridged section where the parking garage bridges over to the grocery store. The area in between will be an open plaza.

“We still feel like it’s important to have the opportunity for pedestrian activity and high visibility,” Yorker said. “People will go to places that they easily see. We wanted to create this civic pedestrian space that really kind of pierces through our building and it stitches…the woonerf to East College Ave.”

The building will feature another courtyard above the retail space that will be for residents. The developers also moved the pool down to the ground level instead of on top of the parking garage as the retail space will require more parking so the entire parking structure will need to be used for parking.

Also on the ground level of the building will be a coffee and coworking space, the leasing office, amenity space and other retail space. 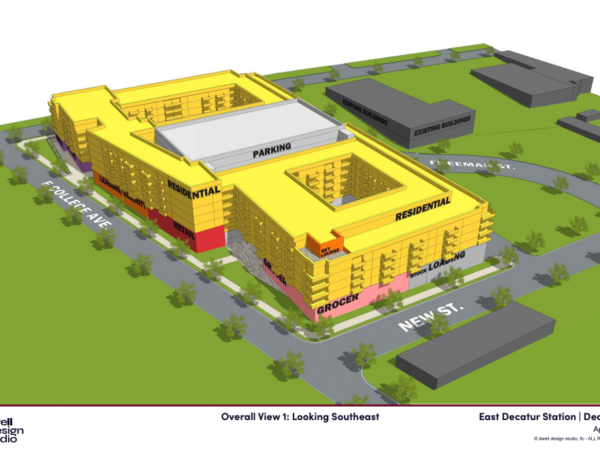 A conceptual drawing of the updated plan for the East Decatur Station development. The view is from New Street facing southeast. Image obtained via the city of Decatur.

DDA board members were supportive of the project and the changes although some concerns were raised about the density of the project.

“In general, I think that the plan is an improvement. I think it’s a real positive,” DDA board member Darren Comer said. “There will ultimately be an almost [one] acre public amenity in that space, in that area. I do think there’s going to be a lot of concerns across the community with a very dense single user as a grocer in the space versus maybe multiple retail services.”

Although, Comer added, it’s better to have one quality retailer in the space rather than potentially empty or underutilized retail. He also had concern about the increased traffic in the area and how that will work.

Other board members were pleased to see a grocery store potentially going into the development.

“At the moment there’s really no grocery store on the south side of Decatur,” DDA board member Tony Leung said. “So I think this is a very positive thing to have a grocer on the south side.”

*Correction: This story has been updated to better reflect that the Decatur Community Players and the Decatur School of Ballet building is not part of the development site.