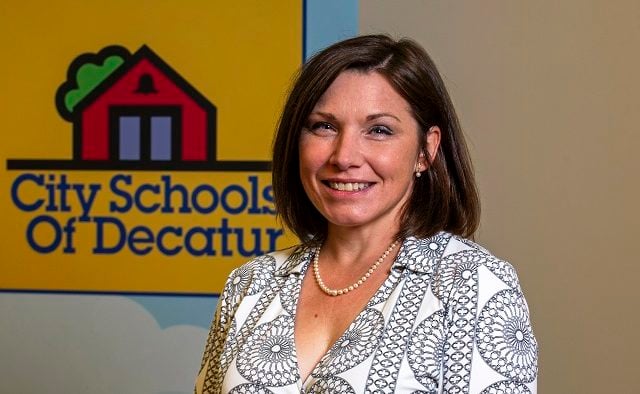 Editor’s note: This story originally appeared in the June 1 e-edition, an exclusive product for our paying supporters. To become a paying supporter, visit supportmylocalnews.com.

Decatur, GA — The City Schools of Decatur Board of Education appointed Dr. Maggie Fehrman as the district’s new superintendent on May 11.

She’s taking over during a rocky time for City Schools of Decatur.

The district faces four ongoing federal lawsuits and recently concluded investigation of its previous superintendent, David Dude. The School Board said the investigator found no evidence of criminal conduct, but the board declined to ask the investigator to write a report about the findings. That means the investigator’s other findings will never be known, leaving lingering questions about what exactly occurred during Dude’s time with the district and why the board decided to part ways with him.

Fehrman said it was a complicated feeling to take on this new role.

“I feel honored and humbled that I was selected for this position,” Fehrman said. “I feel the weight of the success of 6,000 students on my shoulders. I think of the 6,000 students in Decatur as my children.”

While Fehrman was hired to bring stability to the district amidst the chaos, her hiring without a national search and an early misstep have created questions about her ability to lead the district.

Fehrman has been the acting superintendent since Dude was placed on administrative leave in April. The school district announced Dude’s departure on April 27. His departure came after months of investigative stories by Decaturish.com examining allegations raised by the school district’s former human resources director.

The School Board has faced criticism for hiring Fehrman and not conducting a national search for Dude’s replacement. In a press release, the board defended its decision.

“Some in the community have asked whether the board will conduct a national search for a Superintendent,” the press release from the School Board said. “Considering the immediate needs of our students and staff, we decided that rather than conducting a search at this time, CSD deserves to have a leader in place who already fully understands our most pressing issues. Particularly, our focus on ensuring the highest possible academic achievement for our students.

“As we considered how to proceed with leadership of the district, we knew Dr. Fehrman to be eminently qualified, and felt confident she could immediately hit the ground running to ensure a strong start to next school year.”

The CSDBPA was founded by several parents within the district who identify as Black or African American. The mission of the group is to provide a safe space for parents to share issues, concerns, highlight ideas and formulate action plans regarding holding the district staff and school board accountable for the health, safety and success of students, according to the CSDBPA website.

CSDBPA and Beacon Hill Black Alliance for Human Rights held a press conference in April, before Fehrman was appointed, to advocate for a nationwide search for a new superintendent.

“In preparation for the next school year, the CSDBPA believes the district should be diligent going forward in their search for a leader, broadening from a local to national level if necessary,” Sulton said. “Ensuring a transparent process is critical to demonstrating the district’s commitment to restoring trust among parents and stakeholders.”

The coming year will allow the school district to reset from the recent turmoil and its approach to the ongoing COVID-19 pandemic. It also affords the community an opportunity to get a glimpse of Fehrman’s leadership skills and style, Sulton said.

“In the future, the CSDBPA expects honesty and transparency from our leaders,” she said. “There must be clear planning and resolution to issues related to diversity and equity, the budget, and acknowledgment of student’s voices.”

“Additionally, we expect significant improvement in communication from the superintendent, her cabinet and the School Board,” Sulton added. “We expect ongoing improvements for teacher compensation, recruitment and retention of teachers of color.”

A recent misstep by Fehrman created a furor and offended Black families in the district.

When Decaturish asked Fehrman whether the district was considering ending the district’s mask policy following new CDC guidance, Fehrman said, “We feel not a sufficient number have been vaccinated, and we don’t want the unvaccinated people, particularly staff and students of color who have chosen not to get vaccinated, to feel they’re more restricted.”

She later apologized for the comment, pledging to do everything she could to mitigate the harm she caused. But it left a negative impression on Sulton.

“I found the comments disgusting and irritating,” Sulton said. “And, above all things, they are factually incorrect. I am unaware that Dr. Fehrman has some factual evidence that students and families of color vaccinate their children at lower rates than their White counterparts.”

She added it was disheartening to see Black staff members and teachers directly attacked in the statement.

“They are her backbone and do not deserve to be made the subject of stereotypical attacks and false accusations,” Sulton said. “Also, problematic was the fact that Black staff were left out of her email apology. I sincerely hope she has directly reached out to them and plans to address this in a written statement.”

Other parents who spoke to Decaturish agreed with the School Board’s decision to hire Fehrman.

CSD parent Stacie Buckley said hiring Fehrman on a one-year contract was OK, especially given the decision was made close to the end of the school year.

“Hiring someone from the outside requires a lot of time for the search and interview and for them to learn Decatur once here,” Buckley said. “Thus far she has been responsive and decisive, which already feels [like] an improvement. I want that to continue.”

She expects the district will have more accountability with Fehrman in charge, but the School Board must do its job.

“I am expecting the school board to operate as the oversight,” Buckley said. “We elected them. They supervise administration. Not sure why this was previously unclear though it sure seemed that way. We need some clear objectives laid out for Dr. Fehrman. If she hits them let’s then extend her contract. If she doesn’t, time to search.”

She added the community needs to be patient.

“If we don’t give her a chance, we are only hurting ourselves,” Buckley said.

The Decatur Bulldog Boosters are thrilled to have Fehrman take on the role of superintendent, DBB Co-chair Stephanie McCumber Clark said.

The boosters raise money annually to meet the needs of student athletes.

McCumber Clark, whose sons play baseball, was excited to see Fehrman at the first round of baseball playoff games and Fehrman was invited to attend a boosters meeting.

“She jumped right on the opportunity to come, which is great because past superintendents in city of Decatur I feel like have not supported sports,” McCumber Clark said. “They were so hyper-focused on education, and I think Maggie realizes that sports make a well-rounded child.”

Fehrman has since joined the booster club and has started thinking about how to supply resources, such as a track, to the middle school and high school, McCumber Clark said.

“I see her already going out and looking into the community and where can she find the needs that we have so that our athletes have the best opportunity,” McCumber Clark said.

McCumber Clark added parents, especially those involved with the baseball team, wrote letters to the school board in support of Fehrman.

“I think the other thing is it’s nice that she is already there so she’s seen all the trials and tribulations that we’ve been through, all of our struggles,” McCumber Clark said.

Fehrman grew up on a dairy farm north of Pittsburgh, Pa., and is one of seven children. She said in a previous press release that “growing up on a farm embedded a strong work ethic that guides me to this day.”

Fehrman moved to the state in June 2001 and began her career teaching seventh grade social studies at Summerour Middle School in Gwinnett County.

During that time, she had started her master’s program in leadership so after graduating she was hired as an assistant principal at Summerour in 2005. Fehrman worked in several areas in the role including curriculum and instruction and managing the school’s Title I program.

She then served as the North Gwinnett Middle School sixth grade assistant principal beginning in 2009. She was in charge of state assessments, special education and a couple other areas. In 2014, Fehrman became the principal of Bay Creek Middle School in Grayson, Ga.

“I go back in my mind and think two of my favorite jobs were being a classroom teacher and a principal and [assistant principal] was great,” Fehrman said. “I liked that job but really loved being a principal, getting to set the vision for a school, helping my teachers grow, celebrating their achievements, getting to know my students.”

Fehrman joined the City Schools of Decatur in 2018 as the executive director of schools and just before becoming the superintendent she served as the assistant superintendent.

As the executive director of schools, Fehrman’s main role was to support and evaluate the school principals. Part of her role included student discipline, school leadership teams, teacher advisory council, the district and school improvement plans.

Fehrman is excited to see how the district can celebrate students, share their successes and make sure students are successful. Fehrman wants to additionally celebrate teachers for all of their hard work.

Healing and coming together are another priority for her for the upcoming year.

“This has been a very divisive year for many reasons and I want to help our community really see that our priority is students and that together we’re stronger, and that together we can help bring the community back to celebrating and focusing on what’s best for our students,” Fehrman said.

Fehrman is focused on equity as well and working to expand the work the district has already done.

“I know we have a focus on equity between our Black and white students and that is a big issue. There are big gaps there,” she said.

She wants to continue with that focus but also expand equity to ensure special needs students, students in the English as a second language program, and others have the best school experience.

“I want to make sure that all students can look back at their time in Decatur and say that was an awesome school experience, regardless of what demographic or subgroup they fall into,” Fehrman said. “That’s important to me that kids look back and think, yeah, that was awesome. They helped me find out who I am, they helped support that, they helped celebrate that, so that they feel that they’ve been included and heard as a student.”