Members of the development team from LDG Development as well as representatives from DeKalb County, the Statewide Independent Living Council and the Coalition for a Diverse DeKalb held a groundbreaking ceremony for the new Phoenix Station apartments on Wednesday, June 9, at the Kensington MARTA station.

Phoenix Station is reserved for families earning up to 60% of the area median income or just under $52,000 for a family of four. Amenities on the property will include an amphitheater, a playground and splash park, a fitness center and a business center, according to an event flyer for the groundbreaking ceremony.

Chris Byrd, development director for LDG Development, said he anticipates the project will be completed in April 2024.

Access to public transportation is important when it comes to affordable housing and the Kensington MARTA station will be a huge amenity to future residents, Byrd told Decaturish.

There are other developments going on around the MARTA station, but Phoenix Station was the first affordable housing project in the area.

“In order to be able to keep rents for working class folks to be able to take advantage of the public transportation, it’s just important to be that close in proximity,” Byrd said. 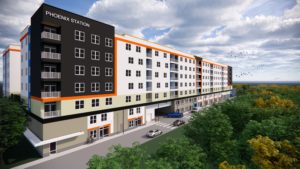 The DeKalb County Board of Commissioners voted to approve this project in August 2018, Commissioner Steve Bradshaw said.

“On that day I published a memo to my constituents in which I made the following observations. DeKalb County needs a stock of quality, affordable housing and I cannot think of a better place…than [close] proximity to a mass transit station,” Bradshaw said.

The DeKalb Housing Authority is working with LDG Development on another project nearby that will be affordable housing for seniors,” Byrd said.

“A wonderful 244-unit development is going to be state-of-the-art, much like what’s being built throughout the city of Decatur,” said Pete Walker, executive director of the DeKalb Housing Authority. “I think one of the things we talk about all the time is that we not only want to have affordable housing, but we want to have quality, affordable housing.”

During the approval process of the project before the DeKalb County Board of Commissioners, many residents were opposed to the development, but a small group of five residents banded together to support the development and founded the Coalition for a Diverse DeKalb.

“We all showed up in support of Phoenix Station and more importantly we showed up in support of our neighbors,” said Emily Halevy, member of Coalition for a Diverse DeKalb. “Nearly 700 units of affordable housing were now gone, the least we could ask for was 244 units of new, affordable housing close to a MARTA station. Through the powers of persuasion and persistence and attending a lot of meetings, we achieved it.”

Halevy said that six years ago, the area near the Kensington MARTA station started changing. In 2015, Kensington Manor, which was across the street from the MARTA station, was bought and redeveloped, meaning over 400 affordable housing units were turned into single family homes and townhomes, she said.

“The goal of our coalition, simply put, we believe that everyone deserves a home they can afford and today is evidence of those beliefs becoming a reality,” Halvey said.

LDG Development also worked with the Statewide Independent Living Council to have a conversation about accessibility because that overlaps with affordable housing.

Statewide Independent Living Council is a policy driven entity that advocates for policy change that will benefit people with disabilities, said Shelly Simmons, executive director of the council.

“As we continually try to educate developers on the need for affordable, inclusive and accessible housing, Chris took a special interest in ensuring that this development will be elevator served, 100% accessible, safe and have extended affordability,” Simmons said. “Believe it or not, affordability still is out of reach for some people with disabilities.”