The Kirkwood Neighbors' Organization met on Thursday June 10 to further discuss the rezoning of a property and a project at the intersection of Rockyford Road and Emery Place. Photo by Zoe Seiler.
Share

Atlanta, GA — The Kirkwood Neighbors’ Organization continued discussions at its June 10 about the rezoning of a property along Memorial Drive.

The KNO previously recommended supporting the rezoning of the properties located at 2246 and 2250 Memorial Drive, the current site of Zion Pentecostal Evangelistic Church of God in Christ. After the first vote on this agenda item, the zoning designation for the project changed from multi-residential to residential general.

The KNO again recommended that the city of Atlanta approve the rezoning. The property owner, Wendel Matthews, wishes to remove the church and put five small detached homes on the property.

Each home will be about 2,600 square feet on the interior and have a two-car garage that is attached. The units will all have four bedrooms and 3.5 bathrooms. The price range is $650,000 to $750,000, which is the price the properties would naturally appraise at, Matthews said at the May 10 meeting.

“Everything that the developer has already designed into this project is there. It is not changing his design,” zoning committee member Susanne Blam said.

But more discussion continued regarding the MARTA bus stop on Memorial Drive and the community’s request for a bus shelter. The development team had proposed relocating the bus stop so it would be around the corner on East Lake Terrace and off of Memorial Drive.

“The problem is the bus won’t stop if you’re sitting on that bench because you’re around the corner and the bus is coming from the east side to the west,” resident Andrew Feury said. “So if I’m sitting on that bench the bus goes straight by and doesn’t see me. As far as putting the bench there I think it’s kind of just a waste of money if it’s not going to be where the stop actually is.”

The new development includes a wider sidewalk along Memorial Drive, so another option would be to build the current bus stop bench into the sidewalk. Although, the city of Atlanta does not allow for that and a variance would be required.

Matthews said he and his team are working with MARTA to see if a bus shelter can be built. MARTA would have to review the property, see if it is eligible for a bus shelter and potentially build the shelter.

“They look at the activity around the bus stop and the ridership and they make the determination in five to seven days,” Matthews said. “If they determine that we can put a bus shelter there, we would then have to coordinate with them about the placement of that bus shelter with respect to what the community wants. We want to do what the community wants. We also want to abide by what MARTA will allow.”

— In other business, the transportation committee presented a tactical urbanism project at the intersection of Rockyford Road and Emery Place.

Transportation committee chair Rebecca Serna said that the sidewalk at the intersection ends suddenly and the committee proposed a plan to improve the walkability of the area.

“The transportation committee has heard from a lot of residents along this corridor and came up with a proposal to try to organize the space better and improve conditions for people that are walking, kids on bikes, people with strollers, people in wheelchairs by designating some space for people walking with…traffic barriers,” Serna said.

The project would also include realigning the intersection as it currently suddenly widens before a curve and there’s a speed table right after the curve. Divers often take that curve too fast and end up in residents’ yards, Serna said.

The cost of the project is about $3,100 and the committee received a grant from the city of Atlanta Community Impact Fund that will offset the cost. 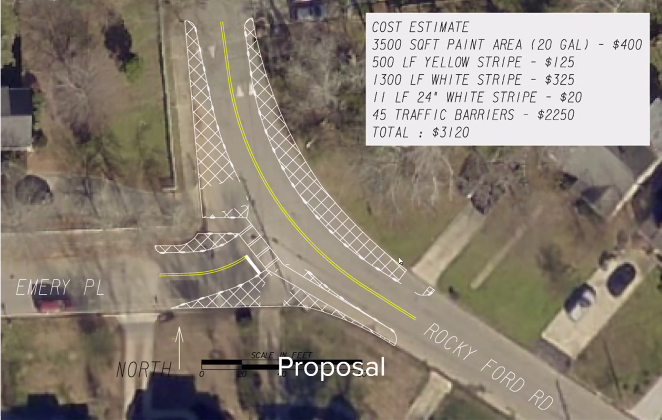 The Kirkwood transportation committee proposed a project at the June 10 Kirkwood Neighbors’ Organization meeting to improve walkability at the intersection of Rockyford Road and Emery Place. Photo by Zoe Seiler.

— Atlanta Police Lieutenant Desmond Floyd gave an update on crime in the Kirkwood area and said that there has been minimal crime in Kirkwood.

“There has been very little crime to occur in the Kirkwood community, however, I’m sure you guys watch the news and everyday they’re talking about how crime is spiking in the city of Atlanta,” Floyd said. “Mostly what we’re dealing with in the Kirkwood community, as I said last month, which is consistent with this month is vehicle break ins. We haven’t had many but we’ve seen some vehicle break ins, some auto thefts in the community.”

Floyd continued to advise residents to keep their cars clean and not leave valuables in vehicles. He also encouraged residents to utilize 911 if they see any suspicious activity.

— KNO Vice President Carl Holt is resigning from his post as he his moving out of Kirkwood to Grant Park.

Holt previously chaired the Spring Fling committee, he has worked with the Kirkwood Business Association on the Wine Stroll, before serving as vice president he was the secretary for the KNO. Holt has served on the board for four years, KNO President Katie Kissel said.

According to the KNO bylaws, Kissel will appoint a replacement, she said.