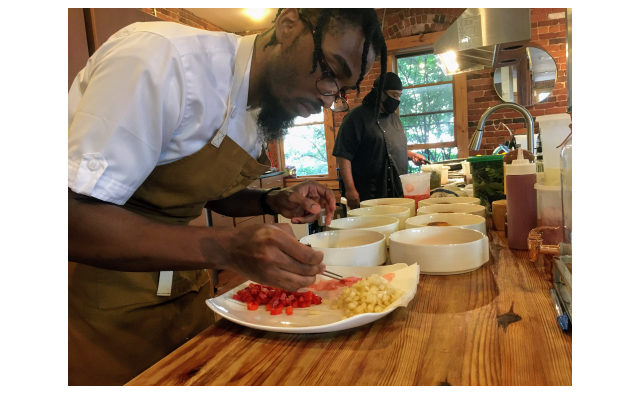 Decatur, GA — Demetrius Brown was part of the team who were going to bring troubled Decatur restaurant The Pinewood back from the brink. And it was working, too.

Then the pandemic hit.

“I was pacing around my living room for two weeks, like everybody else,” said Brown. The dream of renewing Pinewood collapsed under the weight of too many stresses and Brown found himself adrift.

“I took a job washing dishes just to keep my head in the right space,” said Brown. He quickly became sous chef at that restaurant, then helped to open a different restaurant, but found himself dissatisfied.

“I love making Asian food, I love making new American food. But I always had these memories of what my grandmother and what she would make,” said Brown.

Brown grew up in a neighborhood replete with Spanish and Asian food culture, and his first jobs in the restaurant business were in Asian restaurants. Those influences had shaped his career, but after the pandemic forced a reset, he said he came to realize that he felt disconnected from his own culinary heritage.

“My grandmother was from Trinidad, I have other family from Jamaica, and my mother was African, yet through all of that I realized I didn’t know very much about our cuisine and that felt very odd to me,” said Brown.

The idea for Brown’s Heritage Supper Club was born out a desire to fill in the gaps, the stories lost to history both personal and collective.

“The main thing we want to do is bring people together and tell people who I am as a person and as a chef, where I come from and the kind of people I relate to and the cuisine that speaks to me and speaks to people who look like me,” said Brown. He draws not only on his family’s cooking and the history of slavery and diaspora, but the food he ate as a child including Chinese and Italian food and the food he cooked through his career.

Currently, the supper club happens periodically at Art Box, a creative space at 295 Peters St. in Atlanta. The supper club format is an adaptation to pandemic conditions, allowing Brown to keep gatherings to no more than eight people. It also allows him to add flourishes not available in a restaurant setting, like a soundtrack for the individual dishes and his own commentary in between courses. As an experience for the diner, it’s like food performance art with a small but enthusiastic audience, one I highly recommend.

Now, I am a sucker for food with cultural context and a story attached. I wrote an award-winning essay about, among other things, my mother, love among misunderstandings, and biscuits. Beyond the basics of survival, food is about experiences and how we are human together. It undoubtedly helps though when the food is very good.

Brown presented a seven-course meal that ignored conventional ideas about order (two contenders for “salad” and some marvelous mango, tamarind and leche gummies in the middle of the meal to keep you guessing) and combined tastes and textures playfully. The opener evoked the memory of sitting on his aunt’s porch eating cucumbers with pepper on them straight out of her garden, next came a version of his grandmother’s salt fish cakes with scotch bonnet aioli. Both benefited from his chef’s training, but without reaching so hard for fancy that they lost all contact with their origins. The orange pork with sweet chili sauce and chicharrones on top, and the curried lamb with chickpeas, crispy plantains, and roti, were two distinct and tasty registers of spicy, with other food in between to keep them from bashing up against each other.

The chicken fried cabbage with smoked cauliflower gravy was a tasty response to the question “Is Southern vegetarian food an oxymoron?” (The answer is “no, but we will still batter fry that thing, you bet.”)

Dessert (second dessert, like second breakfast) was plantain sticky toffee pudding with crunchy bits of toffee, coconut ice cream, and a bit of salted caramel drizzled on top. It was exactly as good as that sounds. I especially liked the way Brown allowed the coconut ice cream to be coconutty without making it too sweet which kept the dessert from colliding with itself.

Brown, who was nominated for an Eater’s Young Gun award in 2020 and was a finalist on Chopped Next Gen, has no shortage of ideas, and wants to keep expanding his horizons. He’d like to find a more permanent home for his supper club, and then open a restaurant or food stall to make it more casual and accessible. When asked about his long term plans, Brown laughed and said, “The long term goal is to be the best chef in America.”