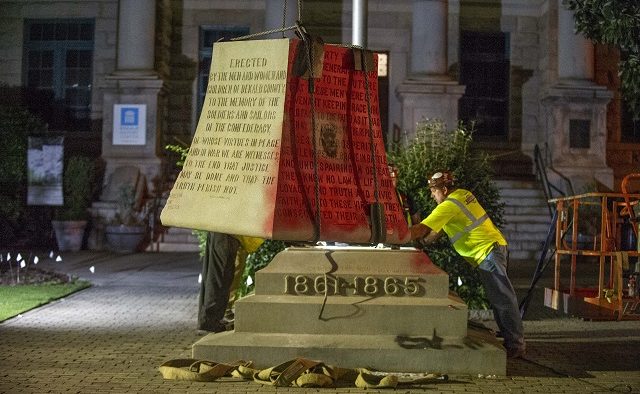 Another section of the Confederate monument is lifted away June 19. Photo by Dean Hesse.
Share

Decatur, GA — One year after DeKalb County removed a confederate monument in the Decatur Square, a pro-Confederacy group has filed a lawsuit seeking to have the monument restored.

The Georgia Division of the Sons of Confederate Veterans has sued numerous city and county officials, including Decatur City Attorney Bryan Downs.

Superior Court Judge Clarence Seeliger ordered the monument to be removed in response to a complaint filed by Downs. In his complaint, Downs said the monument has become “a flashpoint, a danger to the community, and a burden on the city of Decatur.”

Downs specifically cited repeated vandalism of the monument as a reason to expedite its removal. Downs called the lawsuit filed by the Sons of Confederate Veterans “a lost cause.”

“This lawsuit is a tardy, vexatious attack on properly entered rulings by a Georgia court of law,” Downs said. “During the three and a half months between the time of Judge Seeliger’s initial order in June 2020 and the date final judgment was entered in late September 2020, these petitioners had every opportunity to ask the DeKalb Superior Court to allow them to intervene in the case. But they did nothing. The Petition they have now filed is factually incorrect, legally flawed, and procedurally deficient. In short, it is a lost cause.”

“Plaintiffs are entitled to have Defendants ordered to restore the Obelisk to its former place of honor on the Square of DeKalb County,” the lawsuit says.

In a press release, the Georgia Division of the Sons of Confederate Veterans said, “The return of the Confederate Memorial Obelisk to its place of prominence and honor on the Decatur Courthouse Square will send a message around the state and nation vindicating our laws.”

The monument was located by the old DeKalb County courthouse and was constructed in 1908. It is widely seen as a symbol of the Jim Crow era south, a not-so subtle message to Black residents who would question the status quo. Activists have been calling for its removal for nearly three years.

The monument will be replaced with a statue honoring the late congressman John Lewis.