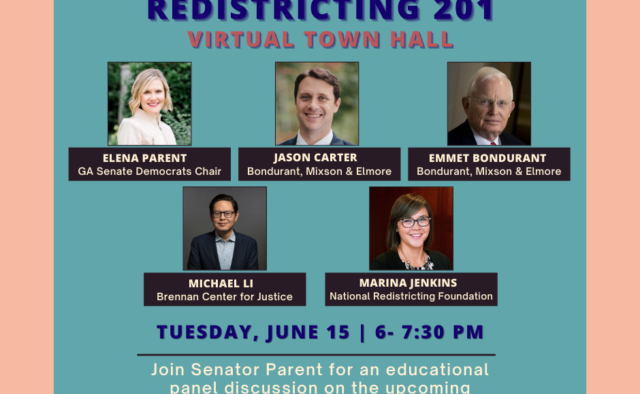 Atlanta, GA — Georgia’s redistricting process will begin this fall where lawmakers will meet to draw the state legislative and congressional districts. This process happens every 10 years and will help determine control of the state government and its policies for at least the next decade, the Georgia Recorder reported. Ahead of this process, state Sen. Elena Parent is hosting virtual redistricting town halls to educate Georgians about the process.

On Tuesday, June 15, Parent was joined by former gubernatorial candidate and lawyer Jason Carter; lawyer and redistricting expert Emmet Bondurant; Marina Jenkins from the National Redistricting Foundation; and Michael Li from the Brennan Center. The panelists offered their knowledge and expertise about redistricting.

This event, Redistricting 201, followed the Redistricting 101 event Parent previously held with state Sen. Michelle Au that was streamed on Facebook. At that event, the senators were joined by University of Georgia professor and redistricting expert Charles Bullock and discussed the process, answered questions and provided information to prepare Georgians for what comes next.

Redistricting happens because the population changes or at least that should be the reason for the process, Carter said.

The one person, one vote principle comes from this and refers to the rule that one person’s voting power ought to be roughly equivalent to another person’s within the same state, according to the Cornell Law School.

“In addition, that one person, one vote rule requires you to justify deviations from that and those different redistricting principles that have been laid out over the years are called traditional redistricting principles,” Carter said. “They include things like keeping communities of interest together, compactness of the districts, in other words, having districts that make sense or that combine with political or geographical boundaries, and also compliance with other laws.”

The most important other law is the Voting Rights Act, Carter said, which includes a pre-clearance requirement that is designed to ensure that districts aren’t drawn to reduce the power of minority populations from choosing the candidate of their choice.

“One of the things that has happened, certainly in 2011, is that this Voting Rights Act process and the Voting Rights Act requirements have been used frankly by Republicans to undermine the ability, in my view, of multiracial coalitions to elect candidates, and frankly to reduce and minimize the amount of power that the African American community has had to elect candidates of their choice in places like Georgia,” Carter said.

Another section of the Voting Rights Act requires states to draw districts that are electorally favorable toward communities of color if certain circumstances are met, Li said.

Some factors that have to be considered are the size of the population in a given area and how the people vote and where the voting is polarized, Li said.

He also added that a challenge to this is that district can’t be drawn solely on the basis of race and it’s as if states have to draw these districts but can’t think about race too much.

“If the district looks like you were just putting people in there because they are Black or because they are Latino then that’s unconstitutional because we weren’t colorblind enough,” Li said. “It’s sort of like draw an elephant but don’t think about an elephant.”

The panelists also discussed a 2019 Supreme Court case, Rucho v. Common Cause, in which the court ruled that partisan gerrymandering claims are not subject to trial because they present a political question beyond the reach of the federal courts.

Bondurant, who was one of the lawyers to argue this case, said that the Supreme Court became very conservative when the case was argued and the consequence of the case was that it sends a message to state legislators that they can gerrymander without interference from the federal courts.

“Prior to Rucho, states at least felt restrained and enough [of a] threat that if we go too far the federal courts are going to come down and rule this unconstitutional,” Bondurant said. “The result of that decision is an enormous set back for voting rights and representation and so forth. There are solutions, but they’re not judicial solutions.”

Gerrymandering can be fought through other avenues besides in the federal courts. Li said the issue is being combatted in state courts, the ballot box and even in Congress.

“The Supreme Court has said that partisan gerrymandering is off limits under the federal constitution but Congress has the power under the elections clause, at least for Congressional elections, to ban racial gerrymandering by statute,” Li said.

Congress is currently considering the For the People Act that would among other things, outlaw partisan gerrymandering of congressional districts, according to the Brennan Center for Justice. Li encourages people to call their representatives and ask them to pass this bill.

Carter added that people need to pay close attention to the redistricting process and the politics of it.

“Don’t let them get away with it without us showing up at the meetings, etc,” Carter said.

He added that even a gerrymandered state doesn’t guarantee an outcome and that multiracial coalitions cannot be kept down for long.

“If you have an all white party, and you’re relying on that as the source of your majority rule in a state like Georgia, that’s not going to last forever,” Carter said.

Parent added that activism can work in the redistricting process.

“First of all, I have seen citizen activism shame the Georgia Republicans into backing off some pretty terrible gerrymanders in the past so don’t despair,” Parent said.

She also encouraged Georgians to show up at the redistricting hearings and provide input.

“Showing up at these things still does help us from an activism standpoint in showing the Republicans the limits, the backlash that they could face, the limits of their plans to gerrymander I think matters as well,” Parent said. “I think it’s an opportunity to air the case.”