Avondale Estates, GA — The Avondale Estates City Commission broke ground on the town green project on Wednesday, June 30, alongside City Manager Patrick Bryant, Downtown Development Authority Chair Dave Deiters and some of the consultants who have worked on the project along the way. Construction has begun on the project and work is anticipated to be finished in nine months.

The project includes the construction of four-acres of the land. About two acres will be a park and the other two acres will be an interim solution and potential commercial solution. The site is located along Highway 278/ North Avondale Road between Lake and Oak Streets.

“I’d like to start by saying this is a truly big day for Avondale Estates and it’s one we’ve been working on for a very long time and this is a project that we have all agreed on after years of discussion and debate,” Mayor Jonathan Elmore said during the groundbreaking ceremony. “It represents what we can do together as a community.”

He thanked the previous City Commission who had that wisdom to buy the four acres of land out of bankruptcy many years ago. Deiters also thanked the board for purchasing the land in 2013 without quite knowing what they were going to do with it.

The project is a joint venture between the City Commission, the Downtown Development Authority and the Urban Redevelopment Agency.

The city’s 2014 downtown master plan included converting this acreage into a park. In 2018, Avondale launched an open, public process to determine the best use of the land. Mayor Pro Tem Brian Fisher told Decaturish the city received about 13 designs and the thought originally was to take pieces of each design and combine them. But when the commissioners and staff looked at all the designs hanging on the walls of City Hall, “entry number nine” was the favorite.

The concept was submitted by Avondale resident and local architect Sheri Locke in May 2019. Locke’s design included commercial buildings next to the road and a public green space behind them, Decaturish previously reported.

The original scope of the project included the mixed-use commercial development but Bryant said at the Feb. 10 City Commission meeting that the commercial element is not feasible at this time. In its place, the developers will create an open-air green space that can be used as for things like food trucks or event platforms.

The city reached an agreement and executed a memorandum of understanding with Fabric Developers in November 2019. Fabric Developers worked with their architectural firm, Stevens and Wilkinson, to select the design and construction firms. The City Commission approved a contract with Site Solutions to complete the design of the town green in December 2019. 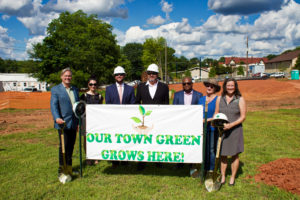 The commissioners were proud, excited and overwhelmed to be able to break ground on the town green on Wednesday.

“[I’m] overwhelmed that it’s so exciting to see something that you’ve worked on in concept for so long actually take shape and see the size and the scope of it,” Fisher told Decaturish. “Hopeful about the impact that it will have on our city and looking forward really to the future commercial development in front and behind the project.”

He added that the board began the process in earnest when he and Elmore were elected to the City Commission in 2016. At first the idea was to create a pavilion walkthrough to get to a grocery store but they didn’t think that’s what the community wanted.

“That started the whole conversation with Second Century [Avondale] and residents and others of let’s really think about what the park should look like,” he said. “Let’s make it more than just a green dot in the middle of a concept drawing.”

Commissioners Lisa Shortell and Dee Merriam were part of the advocacy group, Second Century Avondale, and have worked on the project since at least 2014.

“It’s just going to make Avondale feel like a completely different place,” Shortell said. “I think that one of the reasons Avondale is seen as kind of closed off and insular is because we’ve never really had a downtown and now we’re building a downtown. We’re out from behind the hedges and we’re putting our money out from behind the hedges. That’s a big deal. It’s a message to everybody who lives nearby, we’re open for business.”

Shortell added that she was in tears during the ceremony and had to pinch herself to know it was actually happening.

“I feel like we’re at the very beginning of this amazing transformation that’s going to happen,” Shortell said.

Merriam added that it is truly awesome to see the town green under construction.

“Residents of Avondale Estates have a strong sense of community fostered by opportunities to regularly meet neighbors along our streets and in our parks,” Merriam said. “The town green expands those opportunities by creating a public front porch for our city. We will now have a place for community events that brings us together, welcomes our neighbors, and supports our downtown businesses.”

The groundbreaking was a milestone for the city and was achieved by everyone coming together after much discussion, envisioning and revisioning, Commissioner Lionel Laratte said.

“However, it all came together with all participants working to enhance the lives of Avondale residents,” Laratte said. “I think the mayor’s drive for growth, the commissioners’ support, and the city manager’s team’s determination and experience were key factors. Avondale residents’ vision of a vibrant downtown is being realized.”

“I’m extremely proud,” Yelton said. “I know for this group, the BOMC specifically, there’s a lot of blood, sweat and tears that go on that nobody really sees and a lot of hard work and to finally kind of realize that and see the results of that is awesome.”

Bill Clark, Avondale resident and principal architect at Stevens and Wilkinson, said Avondale holds a special place in his heart and it was unique experience for him to participate in a wonderful project in his neighborhood, he said.

“I have to pinch myself to really believe that I am here this day and what’s going on and the wonderful story we’ve already told,” Clark said during the ceremony. “I think the collaboration between citizens and our public officials, which are also our friends and neighbors I might say, this is how it can really work and it’s so exciting. I’m so proud of that and the countless hours that they’ve spent, the public officials and staff, is just unbelievable.”

The park will be more of a passive park but there will be plenty of space to throw a frisbee or run around, Clark said. The park is meant to be inclusive for children and seniors and everyone in between. The park will also feature wide walking paths, gardens, a dog park and an outdoor event space.

“You can also come here and just chill out and watch people go by or you can participate in the many activities that will be here,” Clark said.

The project will catalyze a transformation of the city, said Jerry Miller, founder and principal of Fabric Developers.

“Avondale Estates, you’ve come a long way baby, as they used to say,” Miller said during the ceremony. “It’s been a long road and you’ve worked hard and I’m very pleased to play a small role in your amazing progress.”

He added the beating heart of downtown Avondale Estates will be the town green.

“I just want to put this in context, though, that I have not witnessed a situation where there could be a greater transformation from what it was to what it will be in any community that I’m familiar with or that I’ve worked in,” Miller said. “I think this is an incredible opportunity. It sets the stage for the evolution of a really organic downtown that will last 100 years.”

Residents in attendance of the groundbreaking were excited to celebrate the occasion as well. Resident Jan Hover said the day was exhilarating.

“It’s reimagining our town as a welcoming, inclusive and beautiful place,” Hover said. “We’ve always had that in the residential area but to have it in the downtown and to become this meeting place for all different kinds of people, it’s splendid. The board, the staff worked so hard to have this happen.”

She also appreciated the public process and that the city reached out to residents multiple times and shared the results of that feedback. 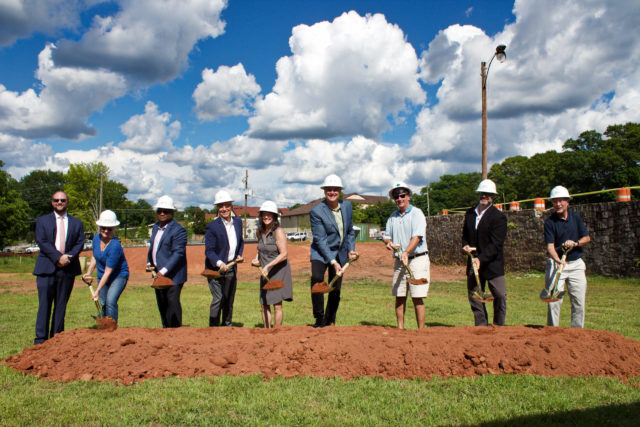