Avondale Estates postman celebrates retirement after 25 years on the job

Avondale Estates postman celebrates retirement after 25 years on the job

Avondale Estates, GA — Russell Lewis is easily one of the most loved people in Avondale Estates. He loves the community and everyone loves him. For 25 years, he has watched children in the city grow up and has been a smiling face at the Avondale Estates Post Office.

On Wednesday evening, Lewis celebrated his retirement with his friends and family as about 50 people gathered at Willis Park to honor him.

“For those of us who’ve lived in Avondale and visited the post office, we have all had the pleasure of interacting with Russell over the years and to know Russell is to love him and [Wednesday] evening is an expression of our love and appreciation for all the kindness he’s demonstrated over the years,” resident Karen Horace said to kick off the event.

Lewis thanked his family, friends and the many residents he has served over the years.

“I’ve been overwhelmed. I’d like to thank my wife and family for putting up with me all these years,” Lewis said. “I’d like to thank residents of Avondale, Decatur, Stone Mountain, those who have traveled far to come to our post office and let them know I really appreciate everything that they did for me.”

He also thank the Museum School staff and students.

“The kids came for tours of the post office and those same kids I’ve seen [grow] up and become college grads and productive members of their society,” Lewis said.

Lewis told Decaturish that he feels wonderful and that the highlight of his career was getting to know people.

“I know everyone personally. I get to know the kids’ names and where they go to school. The parents would feel real good when I would ask them ‘so how is he doing?’ They say ‘he graduated’ and we celebrate that,” Lewis said.

The Stone Mountain resident knows something about many of the Avondale residents and those in attendance recounted some of their favorite memories while sharing hugs and words of congratulations with Lewis.

Resident Laila Hudda, who has lived in Avondale for about 30 years, remembered a time where she was expecting a package of nutritional formula for her mother but the package didn’t arrive on time.

“I went and told him about it and he found it and he came after work and he delivered it to my house on his own dime,” Hudda said. “Once you go in there, he knows you by your name and he never forgets.”

She added that even if Lewis was busy he would always stop to say hi the moment he saw people come into the post office.

Charlie Brookins has lived in the city for 25 years and said that Lewis’ service is some of the best he has had in his life. He described Lewis as being “wonderful” and “absolutely marvelous.”

“If he [wasn’t waiting] on a customer and he looked up and saw you when you come through that door you feel something warm all over because he’d speak to you,” Charlie Brookins said. “That’s is one of the greatest things I think you can have is eye contact and say hello.”

“That was my number one thing. He always greeted me,” he added. 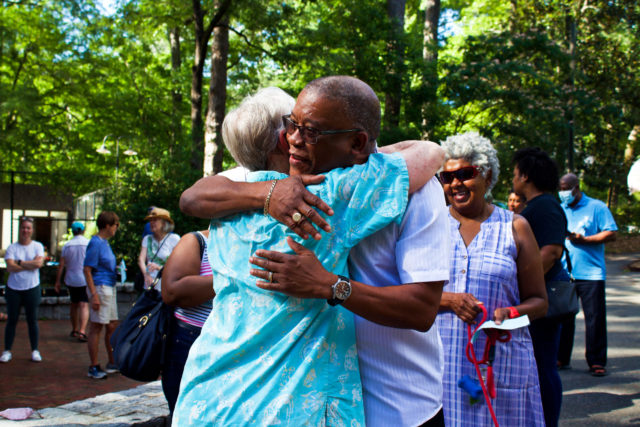 Russell Lewis (right) hugged friends and family as he arrived at his retirement party at Willis Park on Wednesday, June 30. He worked at the Avondale Estates Post Office for 25 years. Photo by Zoe Seiler.

Lewis’ coworkers and supervisors also shared their kind words and well wishes during the party. Area Manager Terry Clemson said he was in a meeting recently where stats were pulled for Avondale Estates for the positive customer survey and “it was off the charts.”

Juanita Marbury, retired postmaster for Avondale, worked with Lewis for 20 years, described Lewis as being an exceptional employee.

“You can well tell that his parents instilled in him a great work ethic,” Juanita said. “He’s made my leadership as postmaster a fantastic journey. I appreciate him and he’s a friend for life,” Marbury said.

She and Lewis’ former coworkers, Tony White and Lenoris Wells, said that they are all one big family at the Avondale Post Office.

“Russell was very knowledgable about the whole neighborhood,” White said. “Everybody knew him. Everybody was friendly with him. If you needed anything just ask Russell. Russell was the one.”

Lewis was always on time, always at work and always had a smile on his face, White and Wells said.

“The thing about Russell too, he’s going to take the time, you may be waiting, but once you get there he’s going to service you. He’s going to always take time helping you and understand,” Wells said.

Lewis is a lovely person, Marbury said, and the people of Avondale loved him back which is what was seen at the party. Lewis’ wife, Cynthia Lewis, felt that love and said she knew Lewis was a great postman.

She added that his love of people and helping people is what makes Lewis special.

“I’m truly overwhelmed by the love and things that were shown to him by the Avondaleans,” Cynthia added. “This has been beautiful.” 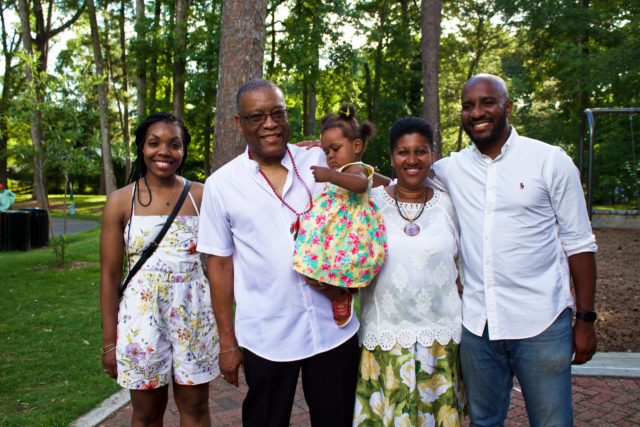 Friends and family of Russell Lewis signed a photo of him to commemorate his retirement from the Avondale Estates Post Office. The photo was presented to Lewis at his retirement party on Wednesday, June 30, at Willis Park. Photo by Zoe Seiler. Russell Lewis looks on as Avondale Estates residents sing “Please Mr. Postman” by the Carpenters at his retirement party on Wednesday, June 30, at Willis Park. Photo by Zoe Seiler.