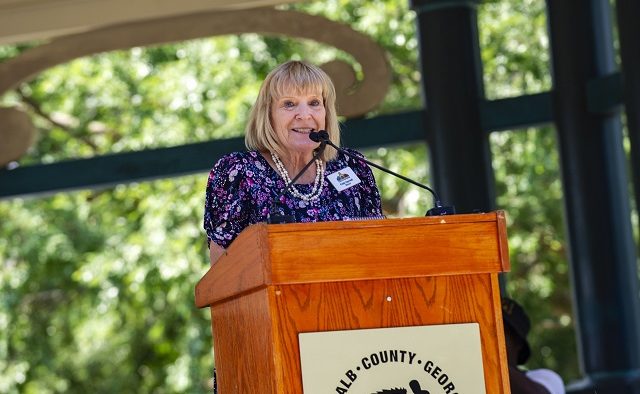 Decatur, GA — Decatur Mayor Patti Garrett has announced she is running for reelection this year and plans to file the necessary paperwork in August, according to an announcement. She has served on the City Commission for 12 years. She was first elected as a commissioner in 2009 and has served as mayor since 2016.

In her announcement, Garrett said that throughout her time in office, she has done her best to hear residents, represent the collective interests of the community and to remain true to her own principles. Her priorities are based on the community’s priorities.

She looks forward to continuing work on the city’s strategic plan, which she said reflects the input of more than 1,000 engaged residents.

“Its vision, mission, and recommendations — including purposeful steps towards equity, racial justice, and climate action — are challenging and invigorating,” the announcement states.

The strategic plan is the community’s ideas and ambitions, and Garrett is committed to making them a reality. She added that the relationships she has built, as a neighbor and elected official, will be key to doing so.

“I look forward to continuing our strong partnerships with the City Schools of Decatur and the Decatur Housing Authority as well as DeKalb County CEO Michael Thurmond, the DeKalb County Commission and our DeKalb County legislative delegation,” Garrett said in the announcement. “Conversations with Congresswoman Nikema Williams and Congressman Hank Johnson have also led to the inclusion of Decatur projects in proposed infrastructure funding.”

Garrett has taught nutrition, provided nutrition counseling services and worked as a clinical dietitian at Georgia State University and Emory University Health Services. She is interested in health policy, particularly related to access to healthy foods, equity, environmental policies, active lifestyles and the role of local government in fostering healthy, equitable and vibrant communities, according to the city’s website.

Garrett also serves as the chair of the board of the National Civic League and on the board of the Georgia Municipal Association where she is a member of the federal policy council and environmental and natural resources committee. Garrett is on the community resources committee and the regional housing task force at the Atlanta Regional Commission, Welcoming America’s One Region Initiative Steering Committee, and New American Pathways’ Advisory Council, according to the city’s website.