Oakhurst Porchfest returning to the neighborhood on Oct. 9

Oakhurst Porchfest returning to the neighborhood on Oct. 9 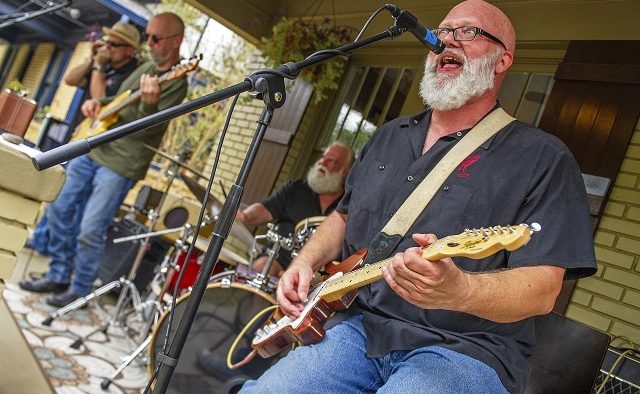 Decatur, GA — Porches in Oakhurst will be filled with music this fall as Oakhurst Porchfest returns on Saturday, Oct. 9, from noon to 7 p.m. The annual festival features various musical performances from residents’ homes and hosts are still needed.

“Host registration for this year’s Porchfest is now open and you are needed,” organizer Scott Doyon said in a Facebook post in the Oakhurst neighborhood group. “Without you, there’s no porches. Without porches, there’s no Porchfest. You’re the linchpin. It’s just one hour of your day, leaving plenty of time to still enjoy everything as a civilian.”

Porchfest is a grassroots festival that is operated by residents and first began in 2015. In 2015, Porchfest saw more than 130 performances in four hours and it culminated in what Georgia’s music tourism bureau called “very likely the most diverse lineup of any festival,” according to the Porchfest website.

Porchfest is open to all to celebrate music and community spread across one square mile of the Oakhurst neighborhood. Tickets are not required to attend the event.

The festival is made up of one-hour performances per porch as Porchfest is also a community-building endeavor as well as a celebration of music, so getting people out is key, according to the website.

“We aim to be a shifting, ever-evolving carnival of interactions and experiences. Not a collection of distinct, day-long yard parties,” the website states.

Porchfest is expected to feature about 200 individual acts spread across an equal number of porches. The lineup for the event is usually announced in September.

The event is in the southwest corner of Decatur, between Agnes Scott College and the College Heights neighborhood to the east and Kirkwood to the west.

According to maps posted on Facebook and the event website, the boundaries of the event are South McDonough Street, West College Avenue to the north, Madison Avenue to the west and extends south to Northern Street and West Pharr Road. 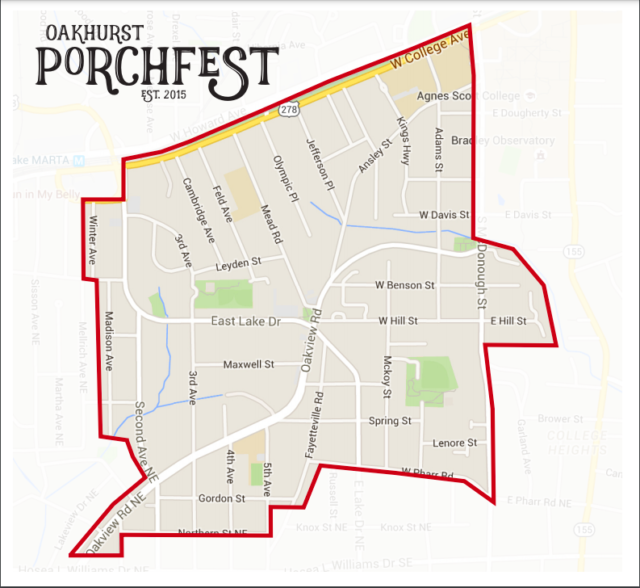 Streets will not be closed for Porchfest as the organizers and volunteers are committed to sharing public space and making the effort to accommodate one another. They encourage rivers to slow down and Porchfest attendees to remain aware of their surroundings, the website states.

Doyon created a GoFundMe fundraiser for Porchfest in May and so far over $15,000 has been raised. The money raised goes to the Decatur Arts Alliance. Funds will be used for police, porta potties, city sanitation fees, program design and printing, signage and promotional posters, block captain supplies, illustration and insurance. Unused funds will be rolled over to the following year, according to the GoFundMe page.