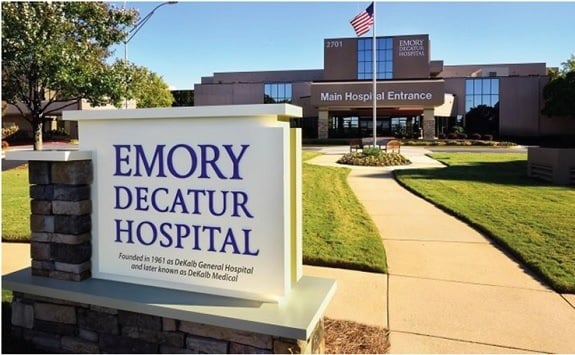 At approximately 7 a.m. this morning, the DeKalb County PD responded to Emory Decatur Hospital after staff observed an adult male patient, who was locked inside of a room, in possession of a gun. When medical staff and hospital security entered the room in order to provide care, the male fired the weapon at them. The emergency room was immediately evacuated as our S. W.A.T. team responded. Officers were then able to safely take him into custody without incident and book him into the DeKalb County Jail for Aggravated Assault and Pointing A Pistol. Fortunately, no one was injured and the public was never in danger! Again, throughout this incident, the male was confined to a lock and secured room!

“Emory Healthcare’s first priority is to the safety of its patients, physicians and employees, and we wish to thank all responders for their assistance,” Diamond said.

DeKalb County Police tweeted that the all clear has been given.

“There has been no active shooter incident at Emory Decatur Hospital today. No one has been injured and the public is safe,” the tweet says. “However, we are investigating an incident that took place this morning at the hospital.”

Multiple police vehicles were spotted and traffic is jammed near the facility. A reader who spoke to a DeKalb County Police officer directing traffic said he was told a patient with a gun was inside the building.