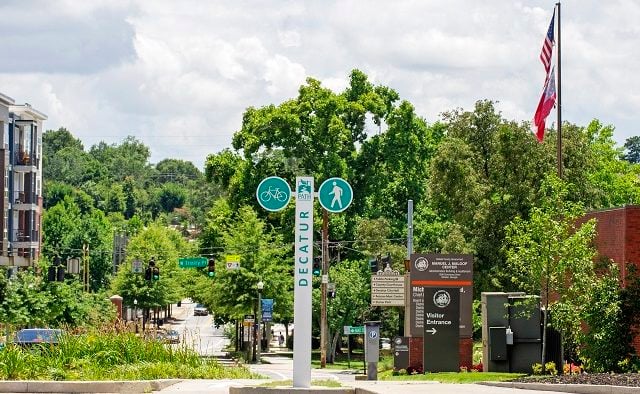 Decatur, GA — The city of Decatur has been in the process of amending the city’s tree ordinance and the City Commission could soon be asked to approve those changes.

At the April 30 Environmental Sustainability Board meeting, Saxon said that the city wants to find a way to plan for trees first, save the best existing trees and provide more effective enforcement. The charge from the City Commission was to have a realistic tree ordinance draft by the end of June.

“I often think about my kids and future Decatur residents needing a lot more shade in years to come with the climate getting hotter,” Miller said.

Erin Murphy, who is part of Save Decatur’s Trees and has advocated for tree protections for years, told Decaturish that the organization would like to see the tree ordinance designate extra protection to priority trees, provide for better enforcement and provide for more transparent, consistent reporting on trees.

She added that the city needs to move toward more sustainable practices that include preserving the best trees by planning for trees first and reducing the grading of buildable areas.

“Tree preservation touches upon several of the major issues this city has been more recently addressing such as stormwater management, climate change and even affordable housing,” Murphy said. “The issues are all interrelated, and as such, trees should be an integral part of the stormwater master plan and the climate change plan that’s currently being discussed.”

The current tree ordinance does not set a tree canopy goal, but the Community Forestry Management Plan sets the citywide canopy goal at 50%. City staff has recommended increasing that goal to 60% in the proposed ordinance, according to the ESB agenda packet. The ESB has recommended that the goal be increased to 63%.

“That is problematic because we switched our metric, so we are using a metric now that has roughly 12% or so, 13% differential,” ESB member Rich Malerba said at the April 30 board meeting. “So that differential needs to be taken into account. Moving 50% to 63% represents no change in canopy coverage over what we had in the past.”

The city had 47% coverage when the 50% goal was set, Malerba said, but the new metric put that same coverage at 57%.

“Now we have 57% canopy coverage based on our new metric. It’s still 47%. Nothing has changed,” Malerba previously said.

The city is still falling short on its canopy goal, Miller said at the June 25 ESB meeting.

“Our canopy goal is just not there,” Miller said. “Sixty three percent represents a 10% gain in canopy over existing conditions. That has been our goal for 15 years, to add 10% of existing canopy. It used to be 45 to 50%. We are struggling to achieve that, clearly we haven’t added canopy, but we’re lowering the bar. By putting it at 60%, we are lowering the bar. The status quo is 63%.”

Miller did agree with other board members that there are provisions in the draft tree ordinance that are stronger than the current ordinance but also asked why the city hasn’t set its goals accordingly.

“This is the goal that the commission has set, is a stronger ordinance,” Miller said. “It’s been 15 years, we haven’t added any canopy. Why are we afraid of setting the goal at what it is right now? We should just do it and we should set a deadline.”

The tree canopy adds beauty and character to the city and it also provides important ecological benefits, such as reducing air temperature, improving air quality, sequestering carbon and intercepting rainfall which helps limit runoff, Erin Murphy told Decaturish. Murphy is part of Save Decatur’s Trees and has advocated for tree protections for years.

“The older more mature trees in original soils have a much higher capacity to provide these benefits than younger understory trees…that’s why we need to preserve trees as well as plant new ones,” Murphy said.

Another recommended change from city staff is that property owners must apply for a tree removal permit and would be required to plant trees to maintain no net loss of tree canopy. Under the current ordinance, residents may remove three trees in an 18-month period with a tree information permit, Saxon said at the June 25 meeting.

Saxon said at the April 30 meeting that the biggest concern for tree loss is the redevelopment of single-family homes, which is the zoning for most of the city. That’s where there seems to be the most tree canopy loss, Saxon previously said.

Under the current ordinance, single-family properties are required to have a minimum of 25% canopy coverage from existing trees.

“In the proposed standards, single family residential properties would be required to have a minimum of 60% tree canopy and conservation of at least 75% of the canopy from trees in fair or better rated conditions would be required,” Saxon said.

The ESB has recommended that the tree bank offset should be reduced to 50%, minimum standards put in place and green infrastructure incentives should be added to offset the lost ecosystem benefits.

High-density residential and commercial properties would be required to have a minimum of 45% coverage, with conservation of 50% of existing canopy from trees in fair or better-rated conditions, according to the agenda packet.

“I think that’s actually a reasonable amount of coverage, but the big change is that you’d have to preserve 50% of the existing fair or better trees on the site and right now that is not a requirement,” Saxon said. “So I think we wanted to be a little cautious about what we were recommending there since we thought that, again, we would be saving many more existing trees on the property than are presently preserved or conserved.”

Another change in the proposed ordinance, as it compares to a previous draft of the ordinance, is adding clear legal standards and definitions.

“The two critical definitions that were, I think, clarified were ‘protected’ tree and canopy credit, the use of the concept of canopy credit in the ordinance,” Miller told Decaturish.

The draft ordinance also changes the canopy credit. Currently, new trees receive credit for tree canopy based on 100% of canopy coverage potential at maturity. Under the proposed ordinance, the credit would depend on the size of the tree.

The tree canopy credit is how newly-planted trees are counted toward a site’s canopy requirements. If a new tree isn’t fully grown, the ordinance treats it as if the tree is a certain percentage mature, for purposes of compliance, Miller told Decaturish.

City Arborist Kay Evanovich explained at the ESB meeting that the credit is based on the tree someone removed.

“Basically … if they remove a large tree, they have to plant back two large trees at 50%,” Evanovich said. “It’s based on what you removed, so they can’t take a small canopy and replace a big tree with it.”

“Presently under the proposed standard a canopy loss fee would be implemented for unnecessary tree removal and this would be based on the National Tree Benefit calculator which would be incorporated into our administrative standards,” Saxon said.

In addition to clarifying definitions, the most recent draft of the ordinance also clarifies the application and permitting process by listing the requirements and what the city arborist can consider when making a decision about a tree permit.

For tree removal, an applicant would be required to submit a tree removal permit, a canopy loss fee, a tree conservation plan, must have no net tree loss and must submit a land disturbance permit or building permit, if applicable, according to the proposed ordinance.

The draft also clearly states the legal standard of the ordinance which Miller said was missing from a previous draft of the amended ordinance.

“You have to comply with the tree ordinance is essentially the legal standard but it just wasn’t in the [proposed] ordinance before so now it actually says ‘you can’t grant a permit unless you fully comply with the applicable provisions of this ordinance,” Miller said. “It was a huge drafting gap in the last draft and having it in there really makes it enforceable and sort of coherent like a lawyer could pick it up, a judge could pick up and understand what the procedures and standards are,” Miller said.