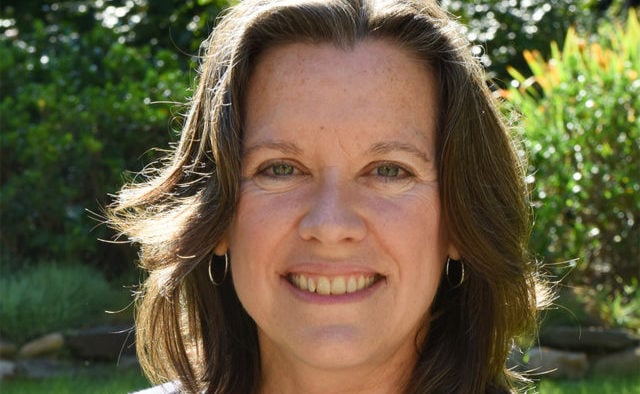 Avondale Estates, GA — Avondale Estates City Commissioner Lisa Shortell has announced her run for reelection and has qualified for the Nov. 2 election.

Two seats on the City Commission will be on the ballot in November. The commissioners are all elected at-large, not for specific districts. Three candidates are running for the two seats. Incumbent Commissioner Lionel Laratte and Ricardo Israel Korn are also running.

“I am committed to smart growth and policies that reflect and value the community input incorporated into our Comprehensive and Downtown Master Plans. Over the last few years, there has been much accomplished. But progress that follows community visioning does not happen by accident,” Shortell said in a statement on Facebook.

“Turning those visions into reality involves foundational planning and preparation, prioritization, financial considerations, public input, board decisions, and execution,” she added. “There are many steps to reach each goal and it takes time, patience, collaboration, compromise, and hard work. These are qualities I believe I have exhibited and practiced with success during my time on the Avondale Estates Board of Mayor and Commissioners.”

Shortell and her husband moved to Avondale Estates in about 1990 and raised their children in the city. Shortell was a science teacher for many years and also tutored students. She had been in and around teaching until about the last 10 years, Shortell said.

She is a founding member of Second Century Avondale, which is an advocacy group that started in about 2014. The group has been working to promote walkability, green space, the character of the neighborhood, and taking that into the downtown. They were very committed to having a downtown park.

Shortell has served on the City Commission since 2017 and is also a member of the Downtown Development Authority. Shortell decided to run for reelection because she wants to continue serving the community, she said.

“I enjoy the job and that’s what it is to me right now. It is my job,” Shortell said. “I enjoy doing research and weighing the pros and cons of the issues. I enjoy working with others to make things happen.”

She added that one of the best parts of her job, and the thing she enjoys most, is meeting with residents.

Moving forward, Shortell wants to maintain the momentum the city has going regarding major projects and other work if she’s reelected.

“I hope to help Avondale continue to meet their opportunities and challenges in a really comprehensive and strategic way, proactive versus reactive,” Shortell said. “Lastly, I guess I’d say I want to make sure that our decision-making continues to be guided by citizen input and our planning that we’ve been doing, things like our comprehensive plan and downtown master plan.”

Shortell hopes to continue working on and ensure the completion of the major projects, such as the town green project, the U.S. 278 complete streets project, the street grid and stormwater.

“I feel really strongly that taking advantage of the current market and investing in opportunities in our downtown now will benefit the city and its residents long term,” Shortell said.

She added that she wants to make sure the town green project is completed in its entirety. The city broke ground on the project over the summer. The town green includes the construction of four-acres of the land. About two acres will be a park and the other two acres will be an interim solution and potential commercial solution. The site is located along Highway 278/ North Avondale Road between Lake and Oak Streets.

The original scope of the project included a mixed-use development, but that is not feasible at this time. The City Commission has also determined that place making is important for this aspect of the project.

“It’s not just about building the biggest thing we can build there. It’s also about making sure that activates the park in the way that we want it to be activated, that it’s a special place for our residents, and that it acts as part of that beating heart in the center of our city, which is part of that whole town project,” Shortell said.

She also wants to ensure the city gets to construction on the U.S. 278 road diet, which will reduce the five-lane road to three lanes between Sams Crossing and Ashton Place. The project will also add medians, parking and a sidewalk for bikes and pedestrians.

Shortell described the project as a game changer for the city, as it will be a safe way to get from the residential area to downtown.

“I think it’s just going to be so much more welcoming for people in the surrounding communities to come and spend time with us and use our businesses,” Shortell said.

The City Commission also recently adopted the street grid into the new zoning code, but the plan includes properties that the city does not currently own. Shortell hopes to see the board take advantage of opportunities as they are presents and work with partner who are developing in order to implement the street grid.

“Street grid is so important because without it you don’t have walkable blocks. It completely helps you control walkability,” Shortell said. “That was a part of the zoning code.”

If elected for a second term, Shortell wants to see the city continue to review and upgrade city policies to make sure Avondale is operating “efficiently, economically and equitably,” she said.

“I really support periodic review in all areas of our municipal government. We should strive for continued improvement and the implementation of best practices whenever possible,” Shortell said. “Some examples of that would be our ongoing police discussions and audit. I personally would like to see a better environmental policy.”

The City Commission began reviewing the police department’s policies and procedures in June 2020 and agreed to hire a consultant to evaluate the department. The board interviewed candidates in September 2020 and has been going through the process to receive state accreditation through the Georgia Association of Police Chiefs.

The city has not moved forward with hiring a consultant and is waiting to do so until the accreditation process is complete.

Shortell said the department has completed the audit for the GAPC to see if they pass the accreditation or not, and the city does not have that report yet.

“My understanding is that participating in that involves a lot of updating policies and procedures,” Shortell said. “I don’t know what the result of that is going to be, and so at this point I’m reserving judgement on next steps until I know.”

At the end of that process, Shortell would like to know what policies and procedures had been updated.

Racial justice and equity have also been points of conversation in the city over the last year. The Avondale Alliance for Racial Justice envisions “Avondale Estates becoming a more welcoming city to those who live, work or visit here regardless of their race,” according to the AARJ website.

To promote racial justice and equity in the city, Shortell said she will continue supporting the Welcoming Avondale Committee. She helped former Commissioner Adela Yelton bring Welcoming America to the city and create the committee.

She added that part of the city being more welcoming means getting out from behind the hedges, which includes putting money into major infrastructure projects in downtown Avondale to welcome everyone and encourage others to visit the city.

“I don’t think there’s anything that’s going to say more that we are now not just this residential enclave huddled behind a hedge as spending our money and energy on making that downtown become more connected and welcoming,” Shortell said.