The Decatur City Commission met on Monday, Aug. 2, at City Hall and voted on adding speed tables to Avery Street and the project budget for technology upgrades in the City Commission room. Photo by Zoe Seiler.
Share

Decatur, GA — Avery Street will soon get two new speed tables as requested by residents who live on the street. The City Commission approved the project during the regular meeting on Monday, Aug. 2.

Speed tables are longer speed bumps with a flat top that raise the entire wheelbase of a vehicle to slow its speed, according to the National Association of City Transportation Officials.

Over 20 residents on the street submitted a petition requesting installation of traffic calming measures in the 100 and 200 blocks of Avery Street. Residents near the proposed locations were notified of the improvements on July 27, Assistant City Manager David Junger said.

“The residents were very clear that they are seeking to slow traffic through the residential neighborhood and improve the safety for pedestrians and the safe routes to school program,” Junger said. 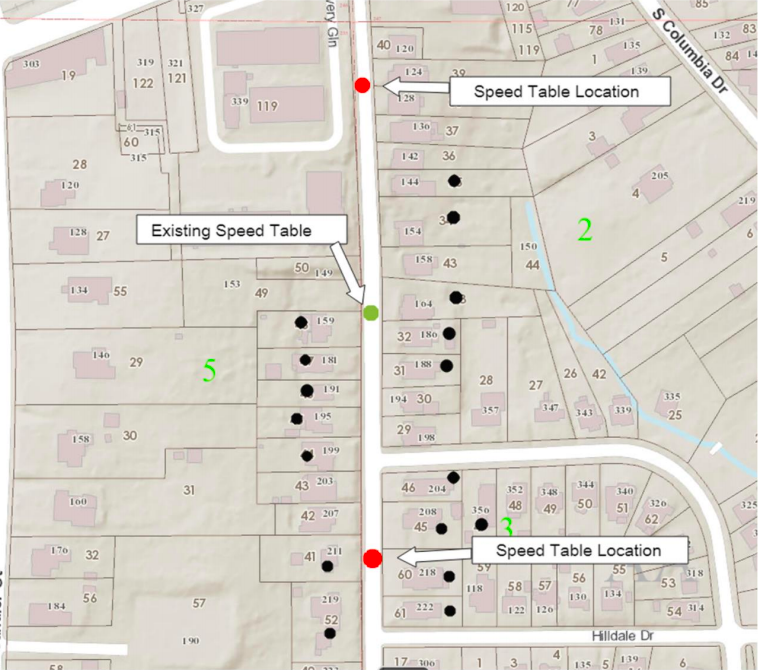 Residents of Avery Street have requested that two speed tables be added to the street to slow traffic. The City Commission approved the speed table locations and construction on Monday, Aug. 2. Photo is from the city of Decatur’s website.

“Our current system was installed in 2012 [and] has only received minor hardware upgrades in those nine years. It is now passed end of life. It’s actually not operable at the moment,” City Clerk and Budget Director Meredith Roark said.

It is recommended that the system be upgraded to a high-definition camera and hardware system in order to continue providing a professional-quality audio and visual streaming experience, she added.

Swagit’s offerings are proprietary and grant hands-free recording, uploading and archiving of meeting videos, as well as indexing, time-stamping and cross-linking recordings to agendas. The new system will also allow the indexed and archived recordings to meet ADA captioning requirements.

Roark added that the yearly cost for the system will increase slightly, but the streaming capacity will also increase. Currently, the city streams about 50 meetings between the City Commission, the Zoning Board of Appeals and the Planning Commission. The streaming capacity will soon increase to 75 meetings. This will allow the Historic Preservation meetings, the Downtown Development Authority meetings and special called meetings to be streamed and indexed as well.

The work will begin in about 45 to 60 days, depending on the availability of the components, and will be finished in one week. The upgrades will complete the technology work needed for the city to continue providing virtual attendance and viewing options for meetings.

— In other business, during the work session Assistant City Manager Linda Harris presented the tourism bureau report to the City Commission. One proposal Harris mentioned during the presentation was that the bureau is looking to open the city’s visitors center seven days a week from 10 a.m. to 4 p.m.

“Before it was open Tuesday through Saturday, and so we are going to hire a part-time person, 20 hours a week, to help staff the visitors center, especially on Saturdays and Sundays, and also during the week to help Sherry [Jackman] hand out some stuff,” Harris said.

The City Commission will meet again at 7:30 p.m. on Monday, Aug. 16, at City Hall, 509 N. McDonough Street. The meeting will also be available through Zoom and live-streamed on the city’s website.