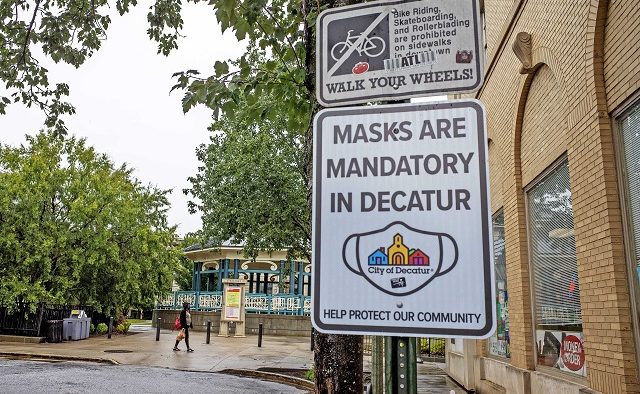 Businesses can opt out of the new ordinance, but the owners of these businesses must post signs notifying the public they’ve opted out.

“If an establishment, if they choose to opt out of enforcement, that establishment must post signage at all their public entrances stating that it does not consent to enforcement of the face covering requirement,” City Manager Andrea Arnold said.

Decatur had a face-covering ordinance in place for almost a year, adopting it in July 2020 and allowing it to expire in June 2021. At that time, the vaccine was widely available, and community spread of COVID-19 had plummeted. While the vaccine is still widely available, the highly-transmissible Delta variant of the virus coupled with low vaccination rates contributed to a surge in COVID-19 infections at the end of the summer.

Commissioners during their previous meeting discussed the possibility of renewing the mask mandate, but decided not to at that time because they wanted to give the public and business community a chance to weigh in.

“Over the past few weeks, the Delta variant, the highly transmissible variant of COVID-19, combined with the low vaccination rates within our overall region have resulted in new daily cases in DeKalb, Fulton and Gwinnett counties on par with the numbers that we were seeing with the last surge in January of 2021,” Arnold said. “We’re also seeing increased pressure on our local and regional hospital capacities. Then at the end of July, the CDC updated its guidance to recommend that all people, regardless of vaccination status, wear face coverings indoors in public areas of substantial or high transmission.”

DeKalb County is an area of high transmission.

Arnold said that given the resurgence of the virus and given that children under 12 can’t receive a COVID-19 vaccine, she recommended that the City Commission adopt the face covering ordinance.

“There are some small differences. Making sure that polling places are included as places of exceptions. Also, religious objections to face covering requirements, as well as allowing establishments to opt out of enforcement of the ordinance on their property,” Arnold said.

She added that by now people should recognize the efficacy of masks in slowly the spread of COVID-19 and the necessity of having a mask requirement to protect those who are most vulnerable.

“All of that is also to say that this doesn’t replace vaccinations,” Arnold said. “Vaccinations do play a critical role in fighting the virus, but until our vaccination rates improve within the county, within the state we’re going to continue to see more cases, more people in the hospital and more people dying from the virus.”

Arnold said that was not the city’s intent, and the ordinance provides the language and preferred font size for the signs.

“We weren’t intending to necessarily use city resources to support a business that wasn’t going to participate in the ordinance,” Arnold said.

Some concerns were raised about the non-compliance signs being punitive. Commissioner Lesa Mayer said that as a consumer, she appreciates being able to recognize when there may be maskless individuals in an establishment. She also acknowledged that businesses may have other mitigation strategies in place, like if a gym is requiring vaccinations, and didn’t want to see businesses be punished.

“What I don’t want to see happen is individuals using this to leverage an…attack on that business or a potential boycott of that business or something of that nature that would put businesses that are already in a sensitive space in jeopardy, and to me, it feels like the only way to resolve that is to say everybody comply with the mask ordinance,” Mayer said.

Mayor Pro Tem Tony Powers agreed that he doesn’t want to single out an establishment, but added that business don’t have to be singled out and can comply “because people will shop where they feel safe.”

Other commissioners added that if a business opts out, they could post additional signs about their other mitigation strategies. 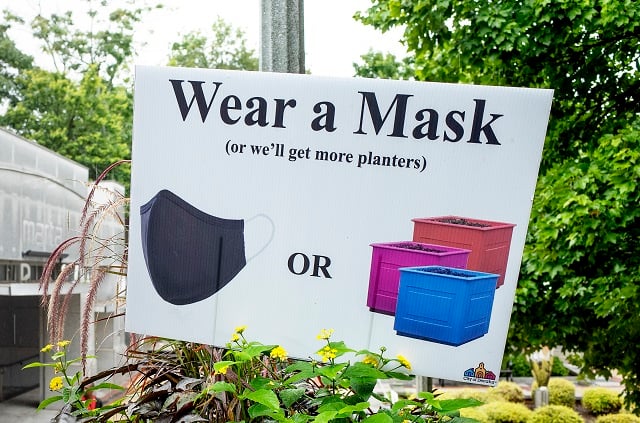