The Decatur School Board met on Tuesday, Aug. 10, at the Wilson Center to discuss the district improvement plan, the code of conduct and the preliminary enrollment report. Photo by Zoe Seiler.
Share

Decatur, GA — The City Schools of Decatur School Board discussed the district improvement plan and the district’s code of conduct during the regular meeting on Tuesday, Aug. 10.

Under the priority of advancing racial equity, CSD is committed to addressing and eliminating unequal, negative academic and discipline outcomes for the district’s Black-identified students.

In terms of accelerating student learning, the district is committed to accelerating student learning by focusing on effective teaching and learning practices that align with the CSD instructional framework. Also, to implement a positive culture and climate, CSD is committed to building and sustaining a positive culture and climate where students and staff feel safe, seen and successful.

One of the goals listed under positive culture and climate is “[b]y 2026, race will not be a predictor of student discipline outcomes,” according to an infographic of the district improvement plan.

“I have been struggling with that since the first time I read it several months ago because I’m trying to figure out when did race become an acceptable predictor of discipline outcomes,” School Board member Jana Johnson-Davis said.

During the discussion, Superintendent Maggie Fehrman discussed CSD’s theory of action for the district improvement plan, which is broken up into three pillars.

The district does that through its major strategic initiatives, which are social emotional learning, restorative practices and positive behavioral interventions and supports, and the CSD instructional framework.

Johnson-Davis wondered how those measures would pay the educational debt back to marginalized students when they are things that all students benefit from.

“But the initiatives underneath, like restorative practices and PBIS, things that we need, I don’t know how those pay the educational debt back to racially marginalized students,” Johnson-Davis said. “Those are things, again, that all students benefit from.”

He added that there are some things in the plan, like creating a social-emotional learning curriculum and multitiered behavioral interventions, but those actions seem neutral and Herndon would like to see something more forward-moving. 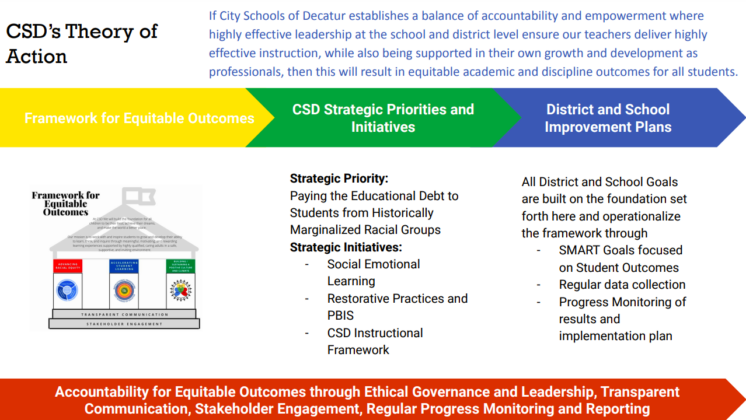 City Schools of Decatur’s theory of action as it relates to the district improvement plan. Photo is from the CSD website.

The School Board also discussed the 2021-2022 review of the code of conduct and restorative practices handbook. The handbook was updated as part of the district’s annual review process, which included two stakeholder engagement meetings.

The key changes, that were based on the input of the review committee and CSD administrators, focused on making the code easier to understand, reducing the number of rules and increasing transparency related to processes and procedures, according to the agenda packet.

Rules four and five of the previous code were combined, which related to school and private property, to make the code more succinct as the rules were basically the same, Fehrman said.

Some changes include reducing the use of the term “other” as a referral option as selecting an infraction from the published code helps to maintain clear expectations and promote equitable outcomes, including a rule matrix in the code.

A section on student searches was added to the code of conduct, which was lacking, Fehrman said.

The section says, “Students have the right to be safe and secure at school and pursue their education in a structured environment conducive to learning. Therefore, students and all their property will be subject to random administrative searches. Refusal to cooperate with a reasonable request may result in disciplinary actions.”

The section goes on to state that any principal or designee who has reasonable suspicion may search any student, place or thing on school property or in students’ possession during any organized school activity off campus. This would include buses, vehicles of students or visitors, and containers or packages.

According to the handbook, the principal can search if they receive information that would cause a reasonable belief that the search will lead to the discovery of:

– Evidence of any violation of the law;

– Evidence of any violation of school rules or regulations or proper standards of student or faculty conduct;

– Any object or substance which, because of its presence, presents an immediate danger of harm or illness to any person.

Additionally, the School Board briefly discussed the preliminary enrollment report that gives a summary of the district’s August enrollment captured on Aug. 4. The current K-12 enrollment of City Schools of Decatur is 5,520 students, a decrease of 123 students from August 2020 to August 2021, according to the agenda packet.

Some preliminary observations indicate that enrollment is up in grades five, eight and 10 through 12. Enrollment is down in kindergarten through fourth grade, as well as grades six, seven and nine.

Official enrollment is captured during the October and March student counts. The numbers at that time are considered to be more stable and are used as the basis of the district’s projection work.

The district is held harmless this year as it relates to budgeting and enrollment, Fehrman said. But the counts in October will impact the district’s budgeting for next year.

“But we had a rush, we had a line out the door on the first day of school. The numbers keep creeping up there, so I think we are definitely seeing a return to more of our anticipated enrollment every day,” Fehrman said. “I think we’re going to inch up there. I don’t think we’ll see a huge impact on our budget.”