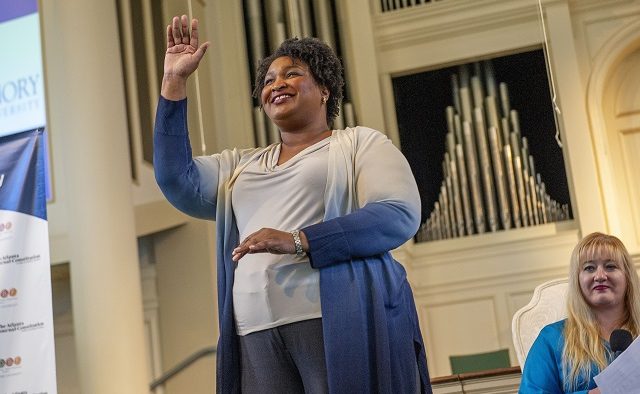 Brian Kemp struck Stacey Abrams down and she became more powerful than he could possibly imagine.

Today, Abrams has achieved greatness. She is courted by senators and television shows. She can raise a million dollars in a night. We hail her as the savior of democracy.

She is also screwing up. Yeah. I said it.

Good. Good. Let the hate flow through you.

Right now, I cannot tell you with any certainty that Stacey Abrams is a candidate for governor of Georgia. And we have reason to believe she may not be.

That is increasingly becoming a serious problem for the tens of thousands of Democrats who poured their souls into turning this state blue last year. It’s August. Less than a year from now, Georgia will be holding primary elections. Normally, gubernatorial candidates are barnstorming the state by now, meeting with local committees, shaking hands and dialing for dollars. We’re seeing none of this, because of the pervasive unspoken assumption that if Abrams is running, her primary victory would be a coronation so why bother.

If Abrams dropped out of public life tomorrow, we’re screwed.

The entire predicate of the Abrams election strategy requires massive voter mobilization. Where is that mobilization going to come from when Brian Kemp has a six-month head start on the campaign? Our faith in her friends is our weakness here: there is no amount of celebrity that can substitute for the kind of hard work activists put in last year.

Right now, her schedule looks nothing like that of a statewide political candidate. She has nothing in particular set up in Georgia until November, I am told by people familiar with her itinerary. That might be wrong – I am mistaken about a great many things – but I don’t rate a phone call returned or comment from her crew about it to be sure.

It’s August, and we do not know with any certainty if Abrams will run. We do know that she’s making more money now than at any point in her life. We know she’s one of the most powerful Democratic voices in the country. Power! Unlimited power!

But she hasn’t said plainly “I am running for governor.”

If she’s not, she has virtually guaranteed that whoever is going to run for governor as a Democrat will be hamstrung by a late start. She is currently making it more difficult for down-ticket candidates to connect with voters because they can’t appear at events she will attend. (This, to the degree that we should even be having events, given the perils of the Delta variant.)

Quietly, other potential candidates are making some calls and testing the waters, in ways that will not seem disrespectful, simply out of prudence given the date. The name of Michael Thurmond, DeKalb’s CEO, has come up. Van Johnson in Savannah could switch gears and run. John Barrow may emerge from whatever bunker he’s in for another shot at statewide office. Someone.

If she isn’t running, so be it. But after what Democrats accomplished, they deserve the respect of an answer now.

I recognize that Republicans are busy shooting themselves in the lungs right now with vaccine denial and internecine warfare. Everything that has transpired has done so according to no design at all: there is no Republican victory plan except to call Democrats a bunch of Marxists and, perhaps, to float images of scary Black men across television screens.

At this rate, it would be easy to wipe them out. All of them. A clean sweep of statewide offices, driven by demographic change and the defection of college-educated voters from the Republican Party, is possible, but only with the mobilization efforts that Abrams has preached for years. With each day she refrains from announcing her candidacy, the organizational advantages of Democrats erode.

There is a great disturbance in the party. Only Abrams can settle it. We cannot allow her to be our only hope.