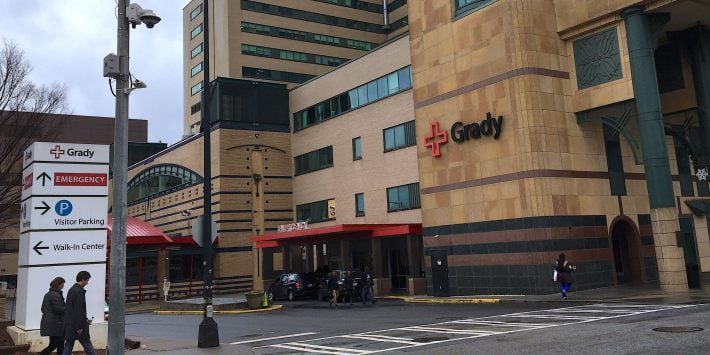 A group of exasperated medical professionals gathered at the Coastal Georgia Botanical Gardens in Savannah Monday to plead with Georgians to protect themselves from COVID-19 as emergency departments statewide overflow with patients.

“We’re tired. We’re at wit’s end,” said Donna Cochrane, chief nursing officer at Liberty Regional Medical Center, a 25-bed critical care facility with 33 patients. “The staff is overwhelmed taking care of your community, taking care of your family, possibly watching them die. This is something we’ve never seen before. It’s trying times. I’ve been doing this for 26 years and never have we seen anything like this.”

“If there’s anything that would make you consider getting the vaccine, think about your family. Think about your community. Think about those that are impacted,” she added. “Wash your hands, wear your masks, take the precautions. If you’re not doing it for yourself, do it for all of these others that are going through this.”

A nationwide surge in the delta variant of COVID-19 is exacerbated in Georgia, where vaccine rates lag behind the rest of the country. About 41% of Georgians are fully vaccinated, compared with just over half of the country.

Experts agree that the vaccines are safe and effective at preventing COVID-19 and weakening symptoms in breakthrough cases, and that masks, along with precautions like hand washing and social distancing, are vital to stop the spread of the virus. Still, many people remain skeptical of the disease and efforts to fight it.

That’s incredibly frustrating for the doctors trying to save their lives, said Dr. Alan Brown, the chief medical officer at the Southeast Georgia Health System.

“People need to talk to their health care providers, debunk this social media stuff, talk to your doctors, people that are in the know,” he said. “It’s lunacy that we are having to drag people out of their own harm’s way, and make them realize that the vaccine is going to save their life.”

Emergency departments use a formula called the National Emergency Department Overcrowding Score to measure strained capacity. It incorporates factors such as the total number of patients, the number of people on ventilators, the total beds and the longest wait time to create a crowding score.

As of Tuesday morning, 50 of the 142 medical centers tracked on the Georgia Coordinating Center’s website were classified as severe, 14 were overcrowded, 24 were busy and 54 were normal. None have reached the highest level, designated as “disaster.”

Patients also report long waits at some emergency rooms, including an average wait of 470 minutes — nearly eight hours — at Piedmont Rockdale Hospital in Conyers Tuesday morning, according to the Piedmont Healthcare website. The website notes that people with life-threatening conditions will be given greater priority.

Doctors say people with mild symptoms or those who want to be tested for COVID-19 should not go to the emergency room. People with severe problems, including difficulty breathing, chest pain or a sudden change in mental state should seek emergency care.

According to the Georgia Coordinating Center, nine hospitals were experiencing total diversion, meaning they could not accept emergency medical service patients.

Statewide, COVID-19 cases have increased more than 200% in the past two weeks, and hospitals are feeling the strain, said Dr. Janet Memark, director of Cobb and Douglas Public Health.

“In our Cobb County district, we are seeing an over 600% increase in COVID cases than we had just a few weeks ago in June, and so beds are either low or critically low across the board for ER, medical, surgical and for critical care,” she said in a presentation on the Cobb County government’s Facebook page. “We’re seeing this all over again. The people that are there, they’re younger than they were previously, you remember, it was 70s and 80s-plus we had hospitalized, and unfortunately, we lost to death. What we’re seeing now is people that are more in their 40s, 50s and 60s, and 93% are unvaccinated right now that are in the hospitals.”

Memark said she fears the current surge will rival the one Georgia endured during the winter, when more than 12,000 cases were diagnosed in one day.

Brown also had a gloomy outlook for the near future unless Georgia can improve its vaccination rate.

This story was provided by the Georgia Recorder under the Creative Commons license CC BY-NC-ND 4.0. Georgia Recorder is part of States Newsroom, a network of news bureaus supported by grants and a coalition of donors as a 501c(3) public charity. Georgia Recorder maintains editorial independence. Contact Editor John McCosh for questions: [email protected] Follow Georgia Recorder on Facebook and Twitter.