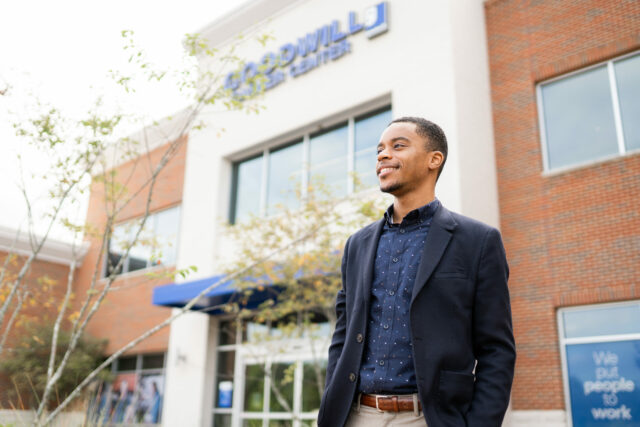 Quandarius Brinkley utilized the services of a Goodwill career center as a teenager, leading to an 11-year career with the organization and eventually a position with Salesforce. Photo submitted by Goodwill of North Georgia.
Share

Greater Decatur, GA — At the age of 18, Quandarious Brinkley started what became an 11-year journey with the South DeKalb Goodwill Career Center. He was a young father looking for a job when he first walked into the career center.

He lived with walking distance of the agency and, on his trips to the grocery store, noticed a steady stream of people flowing through the doors. Having never held a job before and in need of one, he decided to walk in one day.

“At that time, I did not have a job. I didn’t have that on my radar at the time because I wanted to go to college, of course, because of the fact that I became a father I had to quickly shift priorities,” Brinkley said. “I walked in, met with the career center staff there, and they told me about an opportunity as a custodian.”

Brinkley went back for a job fair to meet the manager who was staffing for custodians. Prior to the interview, a career coach helped him create a resume.

At the interview, he did not have any custodial experience, but Goodwill was willing to bring him on as a part-time custodian in 2010.

As a job coach, Brinkley worked with professionals who trained him and helped him develop and grow as a professional. He worked in that role for about a year before being promoted to an employment specialist.

“When I was promoted to employment specialist, I got the opportunity to take everything that I learned as a job coach and to go around to tell the Goodwill story to different employers to help people, like myself, find employment,” Brinkley said.

He worked as an employment specialist for about five years and then was promoted as a continuous quality improvement coordinator.

“I left the mission side of Goodwill to go to more of the retail side of the business working with their stores, getting an understanding of how businesses are conducted on that side,” Brinkley said. “I had the opportunity to work with so many managers who took the opportunity to instill in me everything that I needed to be successful in that role.”

After a year and a half, Brinkley was promoted once more to be a quality auditor. He now works for Salesforce.

Brinkley said it the investment that Goodwill made in him from the beginning of his career is what made him stay with the company for 11 years.

“I could tell that every manager that I worked with, every director that I worked with, they were truly interested in seeing me succeed,” Brinkley said. “I know Goodwill is known for their mission of putting people to work, but that mission extends beyond just helping someone find a job.”

Goodwill’s career centers offer a variety of services from resume work to interview training and other workforce training.

“Part of my commitment when I came in, it was to start moving people not just from unemployment, which in many cases was unemployed poverty, to employed poverty. So we really have been pushing to get people on career paths,” Parker said.

Goodwill helps place people in a variety of industries, such as healthcare, the hospitality industry, apartment maintenance and construction.

“One of our programs is in apartment maintenance,” Parker said. “That’s where a person will go through as long as three or four full months of training with us. It’s a full day, Monday through Friday. We teach them how to be the maintenance person at a condo or apartment, so then they know plumbing, electrical work, sheet rock repair, all those things that you would need.”

Parker said the only thing Goodwill requires is a willingness to work, and they will provide the rest. The career centers are typically open during business hours, and those utilizing the services can set up an appointment or walk in to a center.

“Our goal when we started this new strategic plan in 2018, 2019 was over the five-year period to help 130,000 people find jobs. We are still running at it,” Parker said, adding that COVID-19 has slowed the organization down somewhat. “There’s 158 different Goodwill organizations in the country. We’re number one in helping to put people to work. We think we’re now the number one non-profit in the entire Southeast in helping put people to work, and one of the top handful in the entire country.”