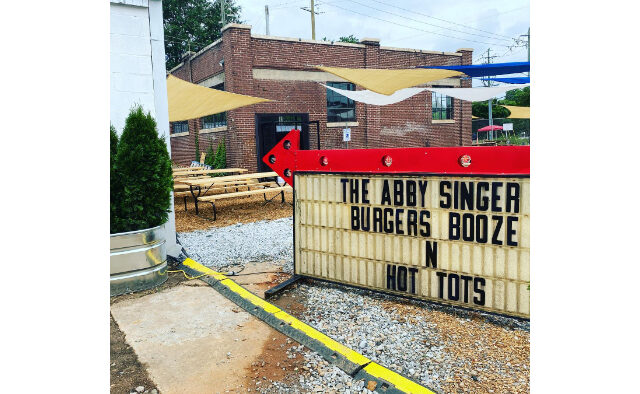 “But the world shut down, so we became a popup,” he told Decaturish.

Horn and head chef Jeffrey Peterson introduced the city to the eatery’s offerings at Pratt Pullman District in Kirkwood, A Mano in Midtown and several local breweries. Then the dream became a reality and The Abby Singer opened as a full-service restaurant at Pratt Pullman in May.

Horn said the experience has been “intense” after putting in 80-plus hour weeks in the entertainment industry.

“Honestly, the same amount of hours I put into the film industry I’m putting into the restaurant,” he said. “But it feels good to put that amount of energy into something you’re creating.”

The “Juicy Lucy” has been a customer favorite. The Minneapolis import is a half-pound burger with melted American cheese in the center.

The agua frescas are a hit from the cocktail menu.

“We fresh-press juices and the customer chooses what kind of alcohol they want to put in to make this delicious drink,” Horn said.

The Abby Singer is benefiting from foot traffic from the Van Gogh exhibit next door. And they’re not having any problems keeping staff on hand.

The roster includes — appropriately enough — someone named Abby, a woman who left her teaching job earlier this year, interviewed for pastoral positions then ended up as a bartender at The Abby Singer.

“We put shipping containers on wheels on the existing historical rails,” Horn said. “We can move them as per whatever function is going on.”

Eater Atlanta named The Abby Singer one of the city’s hottest new restaurants earlier this month.

Want Decaturish delivered to your inbox every day? Sign up for our free newsletter by clicking here