Avondale Estates, GA — The gym at Avondale Elementary School was always full of joy and laughter and was a bright spot for the students. Coach Beth Breit always brought energy and a smile to the gym and made all of her students feel welcome.

“I feel like Coach Breit was the type of coach that loved you through all your hardships and was so kind. She had a connection with all her students,” said Brooklynn Cain, a seventh grader and former student of Breit’s.

She had many catchphrases and nicknames for the school and her students. When someone would ask Breit how her day was, she’d say, “So far, so good, and it’s going to get better.”

The elementary school recently renamed the gymnasium, The Beth Breit Gym. The school began the process in the spring and unveiled the new name on Saturday, Sept. 4, just days after Breit passed away on Aug. 27 due to a battle with cancer.

“I want to thank coach’s family for bringing such a wonderful human being into this planet and teaching her how to love and support people so that she could pass it on to her students,” Cain said.

Those in attendance at the ceremony described Breit joyful, kind, full of life and friendly. She taught at Avondale Elementary for over 20 years. Her mother, Roslind, said she is in the hearts of the staff and students.

“I cannot tell you how touched she was by this,” Roslind said during the ceremony. “She just would say, ‘I don’t think this will happen, but the thought of it happening and the thought that people wanted to do this for me is enough.’” 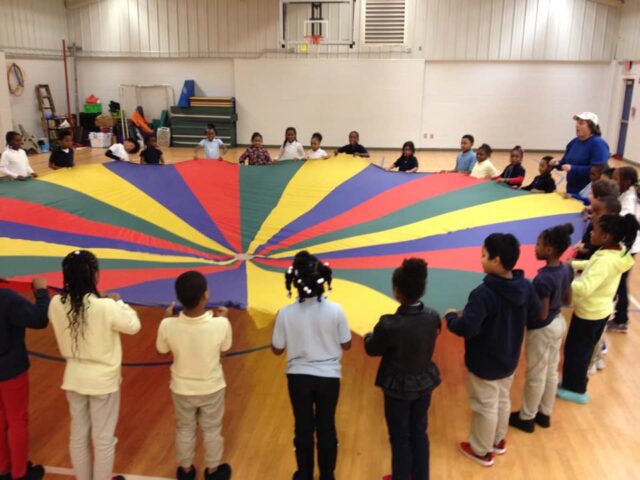 Breit loved what she did and loved every kid she taught. Being a PE teacher also ran in the family genes, as Breit’s father and grandfather were both PE teachers, Roslind told Decaturish.

“I think she’s like her dad, she was very open to people and she always believed they could do. That was it,” Roslind said. “She hated it when someone said, oh, they can’t do that. She said, ‘oh, yes, they can. If we expect them to do it, it will get done.’ She really, really worked hard on that with them, to believe in themselves.”

Breit was a great athlete and worked hard at athletics. Her brother, Tom, said that while she was the second child, she was the first in many areas ahead of her brothers.

He recalled in middle school he had to try out for the seventh and eighth grade basketball teams, and one year the coach asked him to get Breit on the eighth grade girls’ team.

Avondale Elementary School Principal Dr. Dontae Andrews said during the ceremony that those who worked with Breit described her as being an inspiration to everyone and loved by many,

“However, knowing Coach Breit and her attitude about life each day, I know that she would want today to be a day of celebrating the legacy, her legacy, that Coach Breit left behind,” Andrews said.

DeKalb County Schools Region Two Area Superintendent Trenton Arnold worked with Breit about 20 years ago during the brief time she taught at Cedar Grove Middle School. He never forgot how cheerful, happy and joyful Breit was every day.

“When you’re assistant principal, you kind of get it from both directions,” Arnold said. “There’ll be those days where the principal fusses at you, the parents are fussing at you and Beth’s class was the one that I would go to when I needed to be cheered up and just know that everything’s ok, we’re doing the right thing.”

When he became the region two area superintendent, he recalled seeing Breit during a visit to Avondale Elementary School and said she hadn’t changed a bit.

“I had aged 15 years and she had just stepped forward one day because she was the exact same person,” Arnold said. “She just was a joy, always happy, smiling, loving the children. Every single time I saw her, that’s what she was about.”

“It always filled my heart with joy knowing that we had these types of educators in DeKalb County School District,” he added. 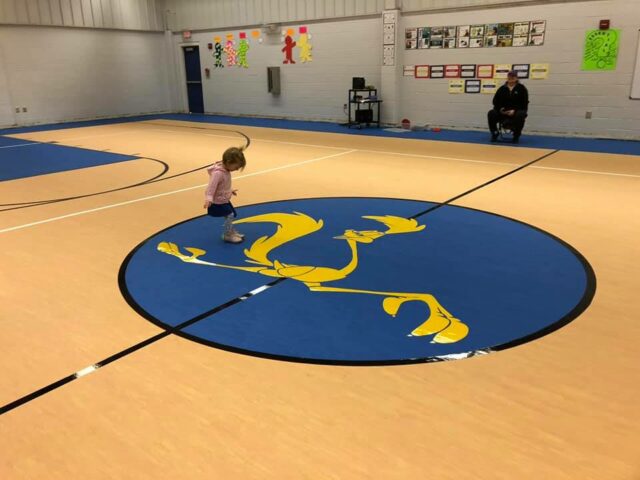 Coach Beth Breit admires the new gym floor when it was first installed in 2018 at Avondale Elementary School. Photo by Katrina Helz.

Arnold is an alumnus of Avondale Elementary and as he started thinking about his own experiences, he said the first thing people think about is the teachers and there are usually two things individuals remember.

The first thing, Arnold said, is that people remember how teachers expected the best out of them.

“They believe in you and they support you, and they help you to do what you need to do to be successful. Beth did that with her students,” Arnold said. “She never gave up on them, and she never let them give up on themselves.”

The second thing is people remember how teachers cared about them.

“Beth cared about every single student she ever came into contact with. Every single one,” Arnold said.

“So what I want to say is thank you so much for sharing Beth with us,” Arnold said. “Thank you for giving us such a wonderful educator. She will be remembered [by] her students forever.”

Breit’s family said the ceremony was uplifting and a little tearful. They were happy to see her name on the gym and know that her legacy will continue.

“To know Beth, I think, is to know love and inclusion. Nobody was left out, and she never gave up on you,” said Steve, Breit’s younger brother, during the ceremony.

He told Decaturish that in one of their last conversations, Breit was angry because she still unfinished business at the school.

“The nice thing … is they’re not going to let her work go unfinished, and the gym is a real sign of that, being in her name,” Steve said. “She’s still doing the work.”