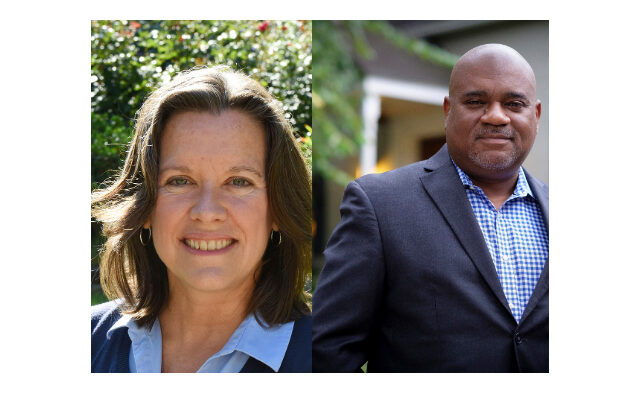 Avondale Estates, GA — Three candidates are running for the Avondale Estates City Commission, and two of them joined the Decaturish Twitch show on Monday, Sept. 20, for a virtual forum.

Each candidate had the opportunity to discuss why they are running for the board and the issues that are important to the community.

Ricardo “Israel” Korn is also running for the City Commission. He declined to participate in the forum.

The commissioners are all elected at-large, not for specific districts. The election will be held on Nov. 2.

Here’s the full video of the Sept. 20 virtual forum.

Laratte and Shortell took office in 2018. When Shortell ran for the City Commission four years ago, she had clear objectives, one being that she wanted to make sure the city government was following citizen input and making decisions based on the citizen input that’s reflected in the downtown master plan and comprehensive plan.

She added that she has seen situations where the city wasn’t making decisions based on citizen input, but said the city has made progress in the last four years.

Shortell is supportive of the city’s strategy regarding the downtown area. It’s a strategy of investment in the downtown and place making, which will help the city diversify its tax base, Shortell said.

“The reason I’m running again is to kind of see that continue,” Shortell said. “I feel like we’re kind of climbing up this hill, and we’re getting to the point where we’re going to really start to reap the benefits of what we’ve been doing. I want to see that focus and comprehensive approach maintained.”

Laratte has three things he wants to focus on in the next four years — diversity, residential infrastructure and resident participation.

“The first is diversity in Avondale estates, and the reason why, because our demographics are changing,” Laratte said. “We can’t ignore that, and I think that being a more welcoming city is a good strategy to work with.”

The forum began with the news that the Avondale Estates police chief is retiring and the police department’s accreditation manager resigned after the agency failed to receive accreditation from the Georgia Association of Chiefs of Police.

“My immediate reaction is that the members of our community who have been calling for police reform over the past year, 18 months…that essentially they’ve made a case for themselves,” Laratte said.

He added that he looks at police reform from a strategic point of view, as the demographics of the city are changing.

“There are many things in the city that are not the same as they were 10, 20 or 30 years ago, and it would be short-sighted to say that you’re not going to undertake a strategic review of the police as part of that,” Laratte said. “I think that what we need to make sure of is that the next police chief, as we undergo this search, is a visionary who understands that in the 21st century, you have to operate under a different set of rules than you did in the 20th century.”

Shortell was disappointed with the outcome of the accreditation process and thought the outcome would have been different.

“I support police officers. They have a really tough job. I feel like our police officers have a lot of support in our community,” Shortell said. “I believe in policy and procedure review across the board in Avondale. I think it’s something we should be doing periodically, and I think this is a part of that. Apparently, unfortunately, it’s pretty clear that some things need to improve and changes need to be made.”

The commissioners received the news and the report as the information was posted to the city’s website and sent out via the city’s e-news shortly before the forum began. Neither had time to review the report and did not know specifically why the department did not receive the accreditation. Both were in favor of making necessary changes to the agency.

The commissioners added that the city still plans to hire a third-party consultant to review the police department policies and procedures. The City Commission began conversations about evaluating the department in June 2020 and interviewed two consultant candidates in September 2020. The board has not taken further action to hire a consultant, as the city was waiting for the department to complete the accreditation process.

“For my part, I always looked at the accreditation and audit process as a beginning step to this,” Shortell said. “I would just say, based on the publication of this press release [on Sept. 20] that we’re probably going to be looking at it sooner rather than later. There is no timeline at the moment, but I would anticipate that it will be high on our list.”

Laratte agreed and said he would like to see the board have a special called meeting to address this.

Stormwater has been an issue in the city for many years as the city deals with an aging stormwater system. Shortell and Laratte would like to see stormwater infrastructure addressed and improved in the city, particularly in the residential areas.

“We have rivers of water running in a lot of parts of the city. We have the stormwater master plan that outlines projects that need to be undertaken,” Laratte said. “That, to me, is a challenge that we can’t really set aside and that we do need to tackle in the residential area.”

“We have started the Northwoods project, which is going to keep the silt from continuing to run into the lake, and in addition, we’re probably going to be doing about another $1.5 to $2 million worth of stormwater infrastructure rebuilding and improvements and cleaning up things that have gone wrong in the next several years,” Shortell said. “So that’s already in our plan and in our budget.”

Shortell would like to see the city assess the health of the lake and the structure of the dam once silt stops running into the water. She also wants to look at the green spaces, particularly in the historic district.

“Several of them are really in need of, I would call it a renovation,” Shortell said. “So not just simple maintenance, but actually taking them down and coming up with a new plan and beautifying them.”

Another issue the commissioners hope to address is traffic calming in the residential areas. Commissioner Dee Merriam began a conversation about traffic calming at the Aug. 11 work session to address traffic flow and patterns. She encouraged the city to begin looking into doing a traffic study and get an estimated cost.

Shortell said that traffic calming is the No. 1 thing she hears about when she holds commissioner chats. In the short term, Shortell would like to see more residential policing rather than policing mainly on U.S. Highway 278.

“Because I think that’s something a lot of residents have expressed to me that it seems like we see the police on [U.S.] 278 a lot these days and not so much in the residential area,” Shortell said.

When it comes to traffic calming, she added that could be anything from tactical urbanism, like the planters in Decatur, or paint on the streets or speed tables in strategic places.

Laratte agreed and said some measures could be taken to add structures that would calm traffic, but that could also be planters or other beatification measures.

“I don’t think that the two are exclusive. You can calm traffic and also enhance the neighborhood with it,” Laratte said. “I am definitely for calming traffic where it needs to be.”

All Decaturish elections coverage can be found at Decaturishvotes.com

The election will be Nov. 2. Early voting will begin on Oct. 12. The voter registration deadline for the upcoming city elections is Oct. 4. To register to vote, click here.

Voters in DeKalb County are eligible to apply for an absentee ballot as of Aug. 16. The county will hold municipal elections on Nov. 2, as well as a county-wide E-SPLOST vote for DeKalb County schools.

Applications can be mailed to the county elections office and voter’s should use this address: DeKalb County Election office, 4380 Memorial Drive, Decatur, GA 30032-1239.

If an absentee ballot is not mailed to you, contact your county’s elections office. You may still vote in person, either early or on Election Day.

An absentee ballot application must be received 11 days prior to the election, which is Oct. 22.

In accordance with SB202, a new voting bill signed by Governor Brian Kemp in March, a voter ID is required to apply for an absentee ballot. A Georgia driver’s license, Georgia voter card, U.S. military ID, employee ID issued by any branch of the federal or state government, U.S. Passport, tribal ID, or a document verifying a voter’s name and address – including a paycheck, utility bill, or bank statement – are accepted forms of ID.

Voters can obtain a free ID at the DeKalb County Elections office at 4380 Memorial Drive in Decatur or at the following locations: