Crash at North Decatur and Superior results in citation for driver

Crash at North Decatur and Superior results in citation for driver 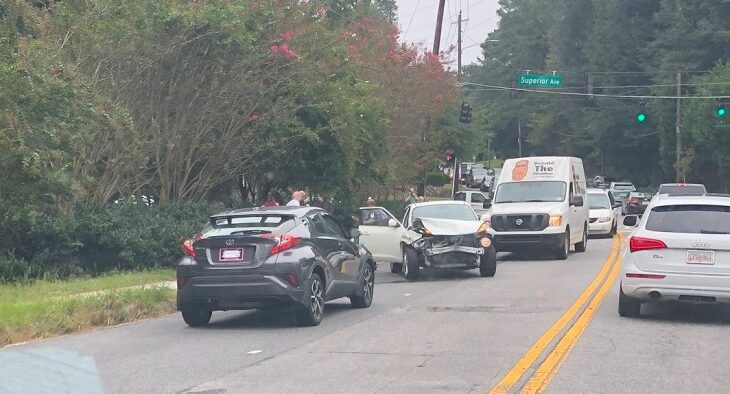 One of Decatur's most notorious intersections, North Decatur Road and Superior Avenue, saw another crash on Sept. 15. Photo provided to Decaturish
Share

Decatur, GA — One of Decatur’s most notorious intersections saw another crash on Sept. 15.

Police at 3:55 p.m. responded to the crash at the intersection of North Decatur Road and Superior Avenue.

“The … investigation revealed, a white Mazda truck was attempting to turn north onto Superior Avenue from North Decatur Road,” Sgt. John Bender said. “A white Nissan Juke was traveling westbound on North Decatur Road at the same intersection. The Mazda failed to yield while making the left turn and struck the Nissan. The driver of the Mazda was issued a citation for failure to yield while turning left. A passenger in the Nissan was on the way to the hospital at the time of the accident for a medical emergency. An ambulance was summoned to the scene in order to assist the passenger with that emergency and facilitate their transportation to the hospital.”

The intersection has been the scene of numerous crashes over the years and calls to improve things haven’t yielded any results.

Mayor Patti Garrett has said it could cost $1.5 million. She told Decaturish that the intersection is complicated because most of North Decatur Road is in unincorporated DeKalb County.

There’ve been no improvements to the intersection since then, Mayor Pro Tem Tony Powers confirmed.

“Part of the issue is, part of it is in the county, but nothing has happened,” Powers said. “… We talked about it briefly in 2019, and COVID hit. It’s one of the long-term intersection discussions.”