Decatur, GA — Open container alcohol sales are set to continue throughout the end of the year. The Decatur City Commission, at its Sept. 7 meeting, extended the ordinance allowing some off-premise consumption of alcoholic beverages in the city’s commercial districts.

The ordinance was first approved in October 2020 in an effort to help local restaurants through the COVID-19 pandemic. It was extended in April 2021 and expired on Sept. 6.

Alcoholic beverages in an approved container from participating restaurants are temporarily allowed on public streets, sidewalk and public plazas located within downtown Decatur and the old Decatur business district along East Howard Avenue. 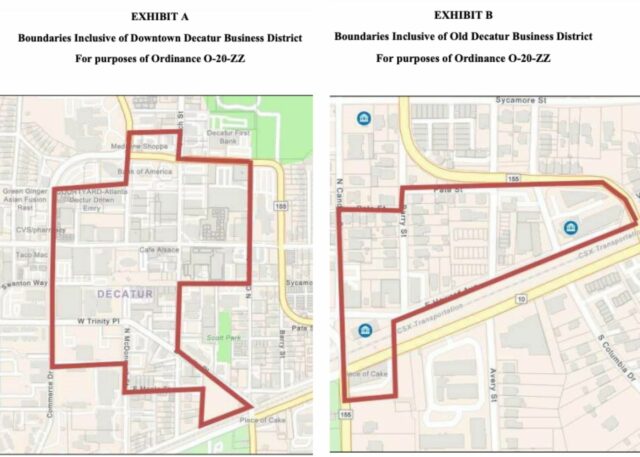 The maps outline the boundaries of the districts in which Decatur’s open container ordinance is allowed. Photos from the city of Decatur website.

“In looking at Sundays, that’s something we will look with [our] opportunity to come back and request this be made permanent,” Baylis said. “So that is something that is definitely going to be under consideration, for that to happen on Sundays.”

City Manager Andrea Arnold added that city staff has written a draft ordinance to make this more permanent. The goal is to bring the ordinance before the City Commission before the temporary extension ends in January.

Customers previously received a reusable cup, but the city is switching to single-use recyclable plastic cups due to a manufacturing issue, Baylis said. But it has allowed the city to adjust the size of the cups, which is the one thing businesses have asked the city to do.

“We are looking into a clear solo-type cup,” Baylis said. “When they’re serving wine, to put wine in a 16-ounce cup, it’s really just too much. So this gives us an opportunity to change to a 7-ounce solo cup and go with a 12-ounce beer cup. We have the logo that will go on that.”

— In other business, the City Commission approved a change order about $146,000 to the pedestrian safety and cycle track project on Clairemont Avenue, Commerce Drive and Church Street. The cost increase is due to delays in starting the project. The city is working with Lewallen Construction on the project, and the total contract amount has increased from about $2.75 million to about $2.89 million.

In May, the City Commission approved plans to permanently reduce the car traffic lanes on Church Street from four lanes to two lanes from the city limits on the north side to the intersection with Commerce Drive. On each side of Church Street, dedicated bike lanes will be added as well as improved sidewalks that will tie in with the pedestrian and cycle-track improvements along Commerce Drive.

The project will also include pedestrian safety improvements at the intersections of Church Street and Commerce Drive, and Commerce and Clairemont Avenue. The city will eliminate the vehicle slip lanes at Clairemont and reduce the crossing distances, making it easier for pedestrians to safely navigate and reducing distractions for drivers.

Lewallen Construction submitted the lowest bid for the project in March. The Georgia Department of Transportation is providing most of the funding for the project, Deputy City Manager Hugh Saxon said.

“They were required as part of their bidding obligation to hold their prices for 60 days, and it actually took two and half times that long to get a notice to proceed from the [Georgia] Department of Transportation, which s providing over 80% of the funding for this project,” Saxon said. “Lewallen said they couldn’t hold their prices for that long.”

The city received the notice to proceed with the project from GDOT on Aug. 19. Saxon said there is funding in the budget for the increase and GDOT has approved the request. The city’s share of the cost would be about $30,000 of the total amount.

— Additionally, the City Commission approved a contract with T&J Industries in the amount of about $12,000. The contract is for vacuum jetting cleaning services for the storm water detention vaults at McKoy Park. T&J Industries previously submitted a bid for about $7,300 and the work was completed based on that bid.

However, due to the amount of debris and time it took to clean the vault, T&J Industries increased the cost of the project, Assistant City Manager David Junger said.

“These vaults are part of the underground stormwater detention system that help mitigate the impacts of stormwater runoff from the upper parking lot at McKoy Park,” Junger said. “Inspection and maintenance of this system is a requirement of our city’s municipal separate stormwater permit from the state of Georgia. Inspection of the system showed that there were definitely access limitations, and we were only able to estimate the volume of debris within the vault.”

The work exceeded the capacity of the city’s public works staff and Junger said the city expected T&J Industries to increase the cost.

“Now we know the amount of debris,” Junger said. “To my knowledge they’ve never been cleaned or at least haven’t been cleaned to that level since I’ve been in public works. So we’ll put it on a more frequent cleaning schedule.”