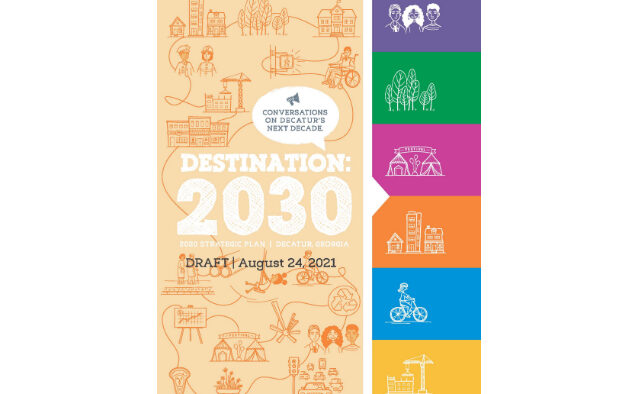 The Decatur Planning Commission recommended approval of the city's new strategic plan despite significant debate Tuesday. The new plan moves forward for consideration by the City Commission on Sept. 27.
Share

Decatur, GA — The city of Decatur’s updated strategic plan, Destination: 2030, will head to the City Commission for adoption at its next meeting on September 27 after receiving a favorable recommendation from the Planning Commission Tuesday.

The 4-1 vote to approve the draft was not without debate.

Commissioner Todd Ohlandt, who voted not to recommend, raised concerns during the meeting about the accuracy of some supporting information underlying the plan’s goals.

A chart published in the latest August 24 draft of the plan states that Decatur has seen a decrease of 74 percent in the number of same-sex households since 2010, with only 0.8 percent of Decatur households currently occupied by same-sex couples.

The chart does not cite a source for this data, Ohlandt said. He questioned how that conclusion was drawn and whether the 74 percent drop was accurate.

“I’m assuming that this is using the unmarried [same-sex] partner households reported in the ACS [American Community Survey], which was 3.1 percent of households in 2010 and is 0.8 percent today,” Ohlandt said. “After 2015, with the court ruling that legalized same-sex marriage, many of these same households may be counted as married couples. I want to make sure we are not comparing apples to oranges.”

Another chart, which also did not cite a source, states that fears that new housing leads to school overcrowding are unfounded because “71 percent of Decatur’s households don’t have children in the home” and more than half of the households are headed by single people”.

Although he did not fault the overarching themes or the listed action items of the draft plan, he pointed to several other places where the plan’s supporting information contained statements of fact without identifying a source or presented contradictory information.

“There are many places where the sources are listed, and I think it is important to have that throughout, from my perspective or a credibility perspective,” Ohlandt said.

Though this was taken directly from the recent report from the city’s Affordable Housing Task Force, having an annual target of 160 new units each year in the adopted strategic plan might present problems going forward, she said.

“I absolutely agree with having measurable goals,” Leland-Kirk said. “I want them to be reasonable, attainable and sustainable. These are annual targets, and we don’t have a lot of vacant property in Decatur. We do have properties that can be used to expand affordable housing, and I agree with that. But I want what we put forward to be achievable.”

Mike Travis, vice chair of the Planning Commission and also a member of the Affordable Housing Task Force, agreed that the targets were ambitious and were debated during the task force deliberations.

“That was a heavily debated topic on the task force of whether or not that’s a reasonable or attainable goal,” Travis said during the meeting. “I would say there was a fairly broad spectrum of opinions of whether it was too lofty or not offering enough.”

Commissioner Greg Chilik pointed to the wording of some transportation action items related to improving MARTA service, noting that much of that is not within the city’s control.

“There is really nothing that Decatur can do to affect train frequency on the MARTA system which goes throughout the metropolitan area,” he said. “And the part about restoring train speeds through Decatur – the reduction in speeds in the underground tunnel – that is due to an agreement reached between MARTA and many homeowners on Hibernia. This was done to reduce the vibrations these residents experienced because the tunnel runs underneath houses. That is really not something that the city can have a direct impact on, and will end up being an unachievable objective.”

Responding to the commissioners’ concerns, Decatur Director of Planning and Economic Development Angela Threadgill said that the draft would be updated to address the commission’s concerns, clarify the data and cite relevant sources before being considered for adoption by the City Commission.

“Regarding the affordable housing [targets], we feel that the community has repeatedly told us that this is what they want to happen, and they have said they want us to be ambitious with our plan,” Threadgill said. “We may not get to those 100 units each year, but that is our intention, and we are going to strive and do our best to achieve it.”

The strategic plan update concludes a process that began in 2019 with several rounds of community roundtable discussions, information sessions and surveys to gather community input on the city’s priorities, policy initiatives and projects for the next decade.

The city is required by the Atlanta Regional Commission and the state Department of Community Affairs to update its strategic plan every 10 years in order to participate in state transportation grant programs, among other things.

This strategic planning process also served as the basis for simultaneously updating the city’s Livable Centers Initiative (LCI) plan and its Comprehensive Plan, both of which have to be updated every five years.

City staff and the consulting team hired to facilitate the process worked through the pandemic by pivoting to virtual information sessions and surveys to continue to foster community engagement safely, Threadgill said.

“This has been an incredible outreach effort and has seen wide participation from the community that I absolutely applaud,” Lori Leland-Kirk said at the meeting’s conclusion. “That you were able to keep going during the pandemic and have meaningful public participation is something to be applauded and I am very proud that our community does plans with such broad participation.”