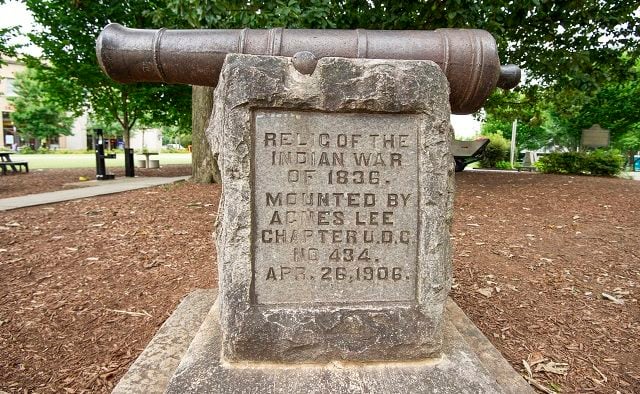 The “Indian War” cannon was placed on the Decatur Square in 1906 by the United Daughters of the Confederacy, the same organization responsible for the “Lost Cause” obelisk removed last year on the eve of Juneteenth. Photo by Dean Hesse.
Share

To see a copy of the resolution, click here.

The cannon was placed in Decatur in 1906 by the United Daughters of the Confederacy and memorializes the removal of indigenous peoples following the Creek Indian War of 1836. The war was a consequence of the Indian Removal Act of 1830, which President Andrew Jackson strongly supported, according to a report from the National Park Service. In 1821, Georgia forced the sale of half of the remaining Creek land, including the land that is now the city of Decatur, which was taken by white settlers in a land lottery.

If the DeKalb County Commission approves it, the cannon will be removed within 90 days. This story will be updated when more information becomes available.