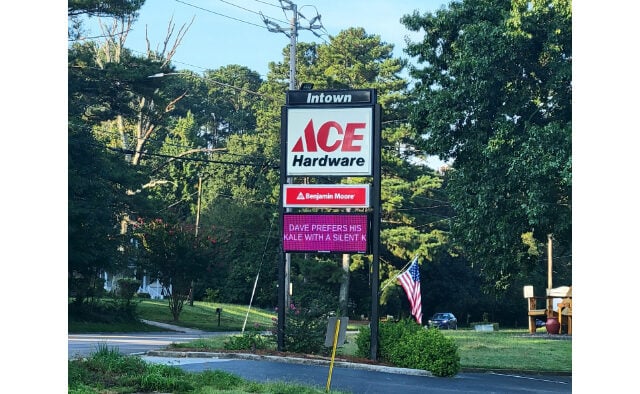 Officials with the DeKalb County Department of Planning and Sustainability have issued three notices of violation to the property owner of the Intown Ace Hardware store on Scott Boulevard.
Share

Decatur, GA — Officials with the DeKalb County Department of Planning and Sustainability have issued three notices of violation to the property owner of the Intown Ace Hardware store on Scott Boulevard.

According to an email from Marcus Robinson, the county’s chief building official, to District 6 County Commissioner Ted Terry, “Notices of violation for [three] separate violations were issued to the Ace Hardware property owner on 8/18/21.  These include failure to obtain building permits, encroachment into the county stream buffer, and duty to prepare a hydrology study.”

On the same day, a citation was also issued to the owners of the hardware store for failure to renew their business license, the email states.

Commissioner Terry told Decaturish he was prompted to ask for follow-up from county officials by requests from constituents who live near the property.

“As county commissioners we do not get involved in the direct operations of the different departments, instead we set policy,” Terry said. However, he was concerned that residents felt their complaints to county staff were not being responded to.

Residents in the area of Willow Lane and Ferndale Drive in Decatur have reported increased flooding and property damage this year that they attribute to the increase in new buildings and paved surfaces in the nearby areas.

“The only citation issued to the hardware store business was for failure to renew our business license,” Jones told Decaturish in an interview. “That was because the county did not send out renewal notices in 2020 or 2021. Prior to this, we have had up-to-date business licenses for 34 years.”

The notices of violation for the property itself concern newer paved areas in the rear of the hardware store property that were part of an expansion of the store’s garden center.

Over the time he has owned the property, including the permitting process for a recent building expansion, Jones said he received conflicting information from county representatives about whether the area behind the store was a wet-weather drainage or a stream.

“In 2019, I was told that it did not have ‘Stream’ designation, but in 2020 they said it was,” he said. “This designation affects maintenance of the state- and county-mandated buffers behind the property.

“I complied with what I thought the requirements were,” Jones added. “We did not remove any trees. The area that was paved had already been cleared and was gravel and we wanted to stabilize it to avoid erosion. We also directed any runoff into a detention pond, so that it would not directly flow into the stream.”

Local resident Cherie Kunik, whose property borders the stream to the north of the Ace Hardware property, says she first noticed what she felt were improper encroachments on the stream buffer in 2019 and notified the county only after trying to work with the hardware store owners directly.

“On a number of occasions, I have reached out to the owners of Intown Ace Hardware, Dave Jones and Tony Powers, to work together to preserve the integrity of the stream buffer,” Kunik stated in an email. “ I have observed increased stormwater runoff, and my property has experienced significant stream bank erosion, which threatens the destruction of trees. Neighbors downstream have also experienced flooding and property loss. My concern is the ongoing impact and the need to preserve this natural, forested stream habitat that contributes many ecological services to our community.”

State law requires a 25-foot undisturbed buffer along any “non-trout” stream in Georgia. DeKalb County ordinances further require a 50-foot vegetative buffer along any stream within its boundary, for a total buffer of 75 feet.

According to Section 14-44.1 of the DeKalb County code:

“Stream buffers shall consist of the contiguous undisturbed natural vegetative land a minimum of seventy-five (75) feet from each stream bank measured horizontally on both banks of the stream from the top of the stream bank. Stream buffers shall preserve any existing mature riparian forest that can provide shade, leaf litter, woody debris and erosion protection to the stream. Land use in the stream buffer is limited to unpaved footpaths, and utility or roadway crossings, except as otherwise provided in this section.”

The section further states that no variances for new construction inside the 75-foot buffer can be issued by the county planning commission except in very limited circumstances.

In Ace Hardware’s case, Jones said the county has asked him to obtain the needed permits and variances for any structures in the 75-foot buffer and to submit a timeline for when the property would be brought into compliance.

“I am in the process of working with an engineer to address any and all concerns raised by the inspector,” he said.

Adequate supervision of the county stream buffer requirements and other construction standards has been an issue for several years because enforcement is divided between different departments that have also not had adequate staffing and resources, Commissioner Terry said.

The economic recession of the early 2000s resulted in staff reductions that hurt the county’s ability to permit and monitor construction and also follow-up on reports of noncompliance, he said.

“We are a large county, and we have a [planning] department that has not had sufficient resources to deal with this,” Terry said. “The county commission recently approved an increase in funding to help resolve a backlog of permitting issues and complaints, so we hope issues like this can be better addressed.”