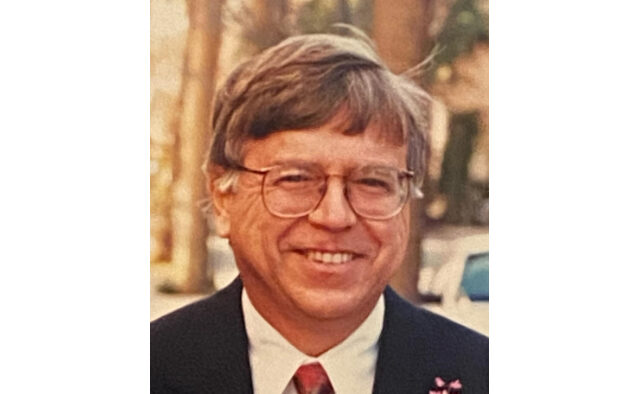 The cause of death was leukemia, his friends and family said.

Kirwan was a lifelong resident of Avondale. He left behind a brother, John, and two sons, Kevin and Nathan. According to his obituary, the family will receive friends from 2 p.m. to 4 p.m. on Saturday, Oct. 23 at A.S. Turner and Sons Funeral Home and Crematory.

Kirwan had a lengthy record of civic involvement in Avondale, a city he dearly loved, and for a time was executive director of the State Bar Association, though he was not an attorney himself.

“He was a non-lawyer in a lawyer’s world and was really successful at it and made some great friends,” his friend Len Horton said.

His accomplishments include organizing and raising funds for Avondale’s Habitat House, including $133,000 in in-kind contributions for the house, which is located in South DeKalb. He was also construction superintendent for the project. He was instrumental in moving the MARTA line north of the city and instrumental in getting the Kensington and Indian Creek MARTA stations built, his friends said.

He also started the Avondale Estates Fourth of July Fireworks show, now an annual tradition. When the Olympics came to town in 1996, Avondale Estates played home to the Polish delegation and got to meet several notable officials, including then-president Aleksander Kwaśniewski. Kirwan was chair of the city’s Polish Olympic Coordinating Committee.

His friend and frequent collaborator Don Connelly said, “We received just an unbelievable amount of publicity during that period of time.”

Like many Avondale residents, Connelly and Kirwan got to know each other at the pool and became friends. He said the fireworks show at first wasn’t much to behold.

“It was not beautiful back then because we were the ones that shot the fireworks,” Connelly recalled. ‘We went and took classes and learned how to shoot the fireworks. It wasn’t very pretty, I can tell you that. There wasn’t orchestration to it. But we had some good big ones, you know.”

One of their tasks was ensuring the volunteers behind the show stayed sober enough for the big event, as the Fourth of July festivities in the city often involved drinking at the pool all day.

“We didn’t have a million dollar insurance policy,” Connelly said. “We had to make sure everyone was safe.”

The fireworks show gained community support and eventually grew into the event Avondale Estates residents know and love today. Another thing Connelly said you might not know about Kirwan is he convinced the original owner of Waffle House to open a restaurant in the city. While Waffle House started in Avondale Estates, when the chain expanded it largely focused on locations near large highways, accessible by drivers and truckers. Once the Waffle House corporate officials saw how profitable the store in Avondale was, the company began opening locations further from large highways, Connelly said.

“That really kind of started something,” Connelly said. ” … You see them all over in town areas now.”

Horton, who met Kirwan when they both worked at the county budget office, marveled at his friend’s creativity, saying he got particularly crafty with the MacDraw program on the old Apple computers, using it to create signs for the city and special pins for a special subgroup of lawyers.

“All of a sudden, the pin became an in-thing,” Horton said. “Every lawyer wanted more than they wanted anything else.”

Horton said Kirwan was not an artist himself, but had an ability to envision something and task others with creating it.

“He was sort of like the Steve Jobs,” Horton said. “Steve Jobs wasn’t the guy who created the circuit. He was the guy who said this circuit has got to do the following things.”

Horton and Connelly both said Kirwan was devoted to his hometown.

“I’m sure that there are probably people who would be in the running for this, I cannot imagine anyone has loved Avondale Estates more than he did,” Horton said. “He truly loved his city and he was constantly on the lookout for anything that would make it more attractive to people, more interesting or a better place to live.”

Connelly said Kirwan, with his drive and creativity, left his mark on Avondale Estates.

“He grew up here. He loved it,” Connelly said. “He did so many good things for the city that probably go unnoticed. He was a promoter of the city. He did a lot with the [Downtown Development Authority] and as mayor. He was very creative about some of the things he did. You didn’t tell him no. If he had an idea, we would just find a way to get it done. It was a different time then.”

Here is a list of all Kirwan’s civic achievements: 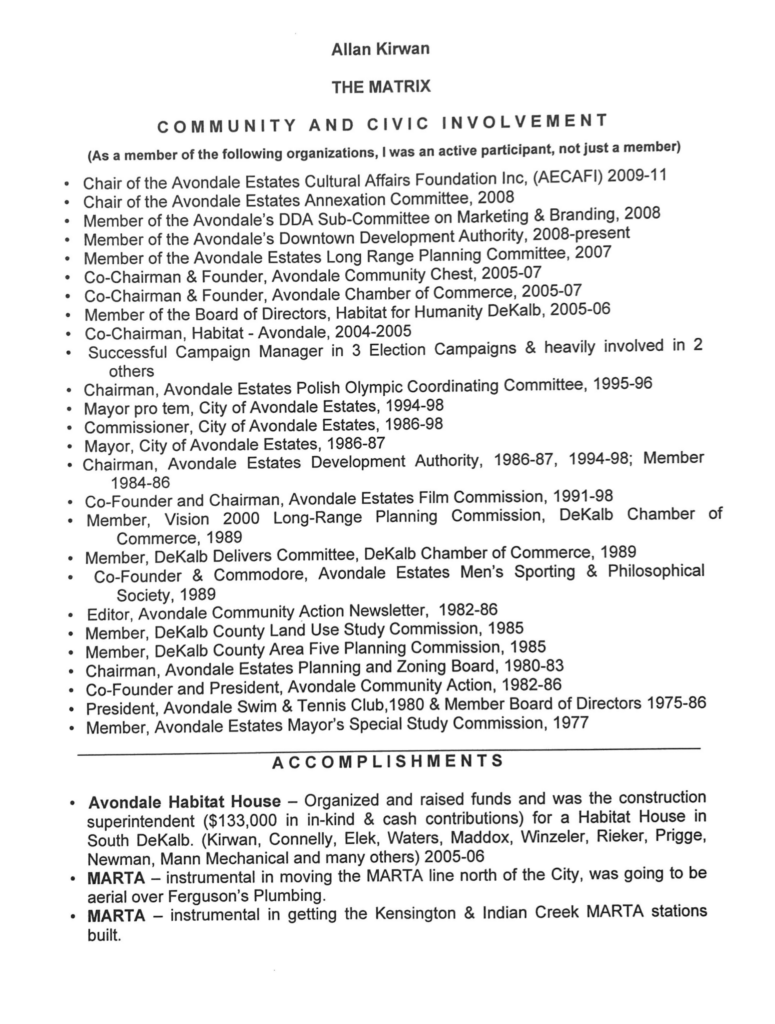