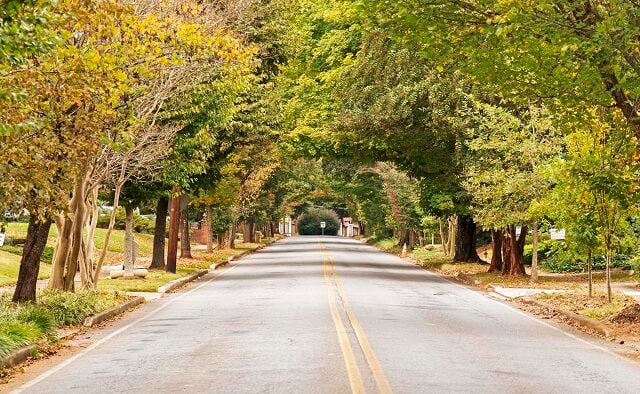 Avondale Estates, GA — The Avondale Estates City Commission continued discussing amendments to the tree ordinance during a work session on Wednesday, Oct. 27. The board is poised to specify the canopy coverage requirements and alter the tree list.

The draft ordinance clarifies that the intent of the ordinance is “to protect the city’s existing healthy tree canopy and amplify it whenever possible, so that coverage remains above 50% and increases over time,” the document states.

The board previously agreed to amend the tree list, which is the section of the city’s Tree Board ordinance that establishes the trees that may be planted in city rights of way, parks and green space.

“It doesn’t mean we can’t have some crape myrtles in our city. It just means we don’t want them taking up space where it’s appropriate to plant canopy trees,” Commissioner Lisa Shortell said at the July 28 City Commission meeting.

One question remaining is what the trigger point should be in terms of when the ordinance would apply or be enforced.

Currently, the tree ordinance applies when a homeowner applies for a land disturbance or building permit. They would also have to submit a tree removal permit, which includes a tree survey, and a tree preservation and replacement plan, among other documentation.

A certificate of occupancy can be withheld for any project that does not comply with the ordinance.

“In addition, any person violating or failing to comply with any of the provisions of this [ordinance] shall be guilty of a misdemeanor and, upon conviction in municipal court, shall be subject to the penalties as provided in this division,” the ordinance states. “Each tree cut, damaged or poisoned shall constitute a separate offense.”

But the current ordinance has an exemption for removing trees when a land disturbance permit or a building permit is not required. The board has aimed to address this loophole in the ordinance.

A recent incident in the city of clear-cutting caused the commissioners to ask for more restrictions on cutting down trees.

The tree ordinance defines land-disturbing activity as “any activity that results in land or vegetation change including, but not limited to, clearing, grubbing, stripping, removal of vegetation, dredging, grading, excavating.”

Shortell wondered if the city could address the issue through the land disturbance permit.

“Because to me when I read this, it sounds like the whole incident that triggered the situation was a land disturbance,” Shortell said. “I don’t understand why they weren’t required to do a tree replacement plan.”

In September, the board discussed implementing a tree notification system as a way for the city to track when residents remove trees.

“I do like the idea of tree removal notification,” Mayor Jonathan Elmore previously said. “I like what Decatur has. I mean, you can get on your phone, you can do it in one minute. Now, Decatur’s does require a professional of some sort. I think that’s a bit much.”

Under Decatur’s current tree ordinance, residents can remove three trees in an 18-month period with a tree information permit. The permit allows the city to track the reasons for tree removal, the amount of canopy removed and a plan for replanting, if applicable. A total of 25% canopy cover must be preserved on a property.

A tree removal permit has to be submitted in Decatur if a resident takes down more than three trees within that timeframe. This permit must be prepared by a certified arborist, the ordinance states.

Although some commissioners were concerned about overcomplicating the process and making it more difficult for residents to maintain their properties.

“I feel like that we are creating a solution looking for a problem, and I just think one of the things we struggled with when we first looked at putting a tree ordinance in, in the first place is that there’s no easy way to put in a tree ordinance and monitor it without it becoming complicated and burdensome to both city staff and/or residents,” Mayor Pro Tem Brian Fisher said at the Sept. 9 meeting.

City Attorney Stephen Quinn suggested shifting away from the land disturbance definition, if the board wants to, and setting the limits according to the canopy goals. If a property owner removed trees that put them below the threshold, then they would need to follow a program, like the tree replacement plan.

“That would be an easy way to administer if the policy were, we don’t want people taking their canopy down below the threshold regardless of whether they’re building something or not,” Quinn said.

Commissioner Lionel Laratte was supportive of this idea, as it could simplify and clarify the requirements. He added that the land disturbance definition also needs to be clarified.

Quinn said the city could add a sentence to the land disturbance definition to say that if a property owner uses a bulldozer, or similar piece of equipment to move the dirt, then they are doing a land disturbance.

“That is something that is entirely objectively observable, and it’s something that the homeowner, or at least person doing the work knows for sure that this job is going to require a backup,” Quinn said.