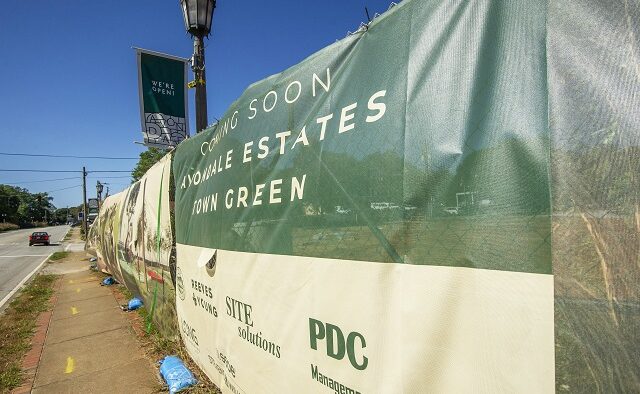 Avondale Estates, GA — The town green project moved a step closer to getting a market pavilion that will be located next to the commercial spaces.

At the Oct. 27 meeting, the City Commission discussed the funding options for the pavilion and gave the developers direction to begin creating the construction drawings for the pavilion that will be on the corner of North Avondale Road and Oak Street.

Fabric Developers and Stevens and Wilkinson anticipates having final designs and cost in about six weeks for the market pavilion.

The Avondale Estates City Commission broke ground on the town green project on June 30, alongside City Manager Patrick Bryant, Downtown Development Authority Chair Dave Deiters and some of the consultants who have worked on the project along the way. Construction is ongoing and work is anticipated to be completed in spring 2022.

At the Sept. 22 City Commission meeting, Jerry Miller, founder and principal of Fabric Developers, presented plans for a two-part commercial development. One area will be a multi-use pavilion and parking area. He estimates the cost will be about $1.1 million.

The multi-use pavilion area could be used as a community facility for use as a home for community events, the Avondale Farmers Market, food truck parking and temporary parking for events, according to the proposal.

“The thought there was we wanted to reduce some of the square footage of the commercial piece,” said Bill Clark, principal architect at Stevens and Wilkinson, the firm designing the project. “But we, and you all, and I think the community has always been intrigued by having some sort of community space.”

He added that the character of the structure is important, and the designers wanted it to be a lasting, important building for the city. They wanted the pavilion to emulate the Tudor Village and connect to the performance pavilion that will be in the park.

“It’s a really important structure, and it needs to be done well,” Clark said. “We think it’s not only going to be there a long time, but it needs to have a high quality about it. It’s going to be observed by all of our community and those who drive by it.”

The pavilion will be designed in the same character as the performance pavilion that will be in the park, including glulam wood and heavy timber structure, and a metal roof.

“We are taking similar elements, like the curving wood arches, so that there’s a consistent pattern,” said Sheri Locke, senior architect with Stevens and Wilkinson and designer of the town green. “We’re creating identity here. We’re creating a place that’s special.”

The pavilion will also feature lighting and fans, so events could be held at night. The design includes the infrastructure for speakers and accent lighting, as well, that could be added at a later time.

One idea was to place gravel underneath the pavilion, but the commissioners agreed the surface should be concrete. That will add about $65,000 to the cost, Miller said.

The developers hope to create a bookend to the Tudor Village with the design of the pavilion. The price came in at about $1.1 million initially, but Miller said some costs could be cut.

He thinks $250,000 of contingency could be preserved to help offset the cost. The contingency fund is money that has already been pledged to the town green project.

The added cost of laying concrete underneath the pavilion would be about $65,000, bringing the added cost to about $915,000.

“If we can do this for that amount, keep it there, and if we have the means to pay for it, I like this [design],” Mayor Jonathan Elmore said.

The City Commission also wanted to take advantage of Reeves Young already being on the site constructing the park, as the firm would be able to simultaneously build the pavilion. 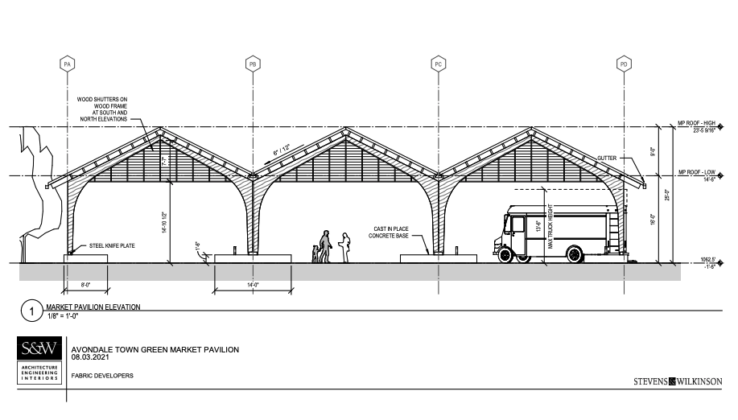 The commercial development of the town green project in Avondale Estates includes constructing a market pavilion on the corner of North Avondale Road and Oak Street. Photo is from the Avondale Estates city website.

One idea was that funding from the American Rescue Plan Act could be used for stormwater. The city could allocate its ARPA funding toward stormwater in the park, and reallocate the money already in the budget for stormwater toward the pavilion.

The Avondale Estates Downtown Development Authority previously voted to support putting money toward stormwater and the interim solution. If the city uses ARPA funds to cover the park stormwater costs, the City Commission could ask the DDA to reallocate its funding toward the pavilion. That would be about $780,000. The remaining cost could be covered under the bond anticipation note.

The DDA could also continue to fund the park stormwater solutions and interim solution, which would take those resources out of the bond anticipation note. That cost is in the BAN currently, so that funding could go toward the pavilion.

“The combination between the ARPA funds and the DDA funds gives [the City Commission] a number of different options and ways to fund other things and then redirect those monies toward the pavilion,” Powell said.

The city could also pay for the pavilion project through the bond anticipation note.

The current version of the city’s capital budget anticipates borrowing the entire cost of the park and the market pavilion from the bond anticipation note.

“It does not include the revenues from the ARPA funds or any contributions from the DDA,” Assistant City Manager Paul Hanebuth said. “Anything that’s contributed from both sources, ARPA or the DDA, would reduce the amount you would need to borrow from the BAN for this whole set of capital expenditures.” 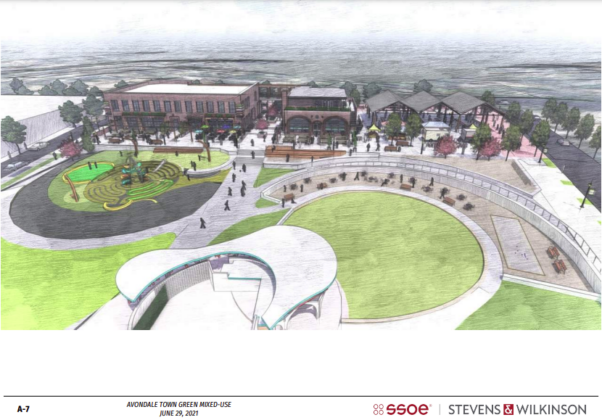 Correction: An earlier version of this story incorrectly stated the estimated cost of the pavilion project. The story has been updated with the correct information.