Atlanta, GA — After a four-month renovation, the Asian gallery at Emory University’s Michael C. Carlos Museum reopened in August. The renovation significantly increased the museum’s capacity to display works of art to better serve the university and the community, according to a press release.

Some walls were taken down and reconfigured and smaller pedestals were built to add significant floor space, allowing three-dimensional works like the Shiva Linga to be displayed in the round.

Elizabeth Hornor, Ingram senior director of education, is over the moon about the installation. The space originally had an area blocked off by a wall that felt tight, almost like a closet.

Overall, the space has been opened up and is bigger, so the museum could hold a gallery talk in the space and the public can see easily see the objects. The space also allows bigger pieces to be displayed, as the former space didn’t have room to display some artwork.

“This is the first time ever that the public can come to the museum and see the lion’s share of our collection displayed all the time,” Hornor said.

The gallery starts with a statue of Ganesha at the entrance. He is one of the most revered Hindu deities, known as the lord of new beginnings, the remover of obstacles.

“You find Ganesha everywhere,” Hornor said. “You find him on the dashboard of taxis and rickshaws in India. You find him by the cash registers in Indian businesses in India and also this country.”

At most Hindu temples, Ganesha is the first thing people see, she said.

A major element of the renovation was installing a series of archival drawers with protective UV plex covers to store and display the museum’s collection of Indian paintings. The paintings are sensitive to light and can only be displayed for three months at a time, Hornor said.

“Yet those paintings are so beautiful. They’re so interesting, and they’re also used a lot by faculty in teaching,” Hornor said. “The other part of this grant is can we put drawers in the gallery so that people can view these all the time, classes can use them all the time and yet still have them protected from the damaging effects of constant light exposure.” 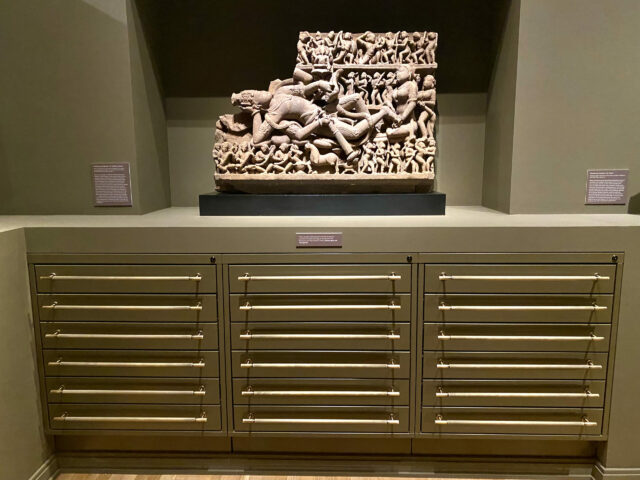 The archival drawers were installed in the Asian Gallery at the Carlos Museum in order to display light-sensitive Indian paintings year round. The statue above features Vishnu resting on the cosmic ocean. Photo by Zoe Seiler.

One painting that’s housed in the center of the drawers is strategically positioned, as it represents the same scene depicted in the statue above the drawers.

“The Avatars are really interested in that they start with creatures of the sea, and then they proceed up to human beings,” Hornor said. 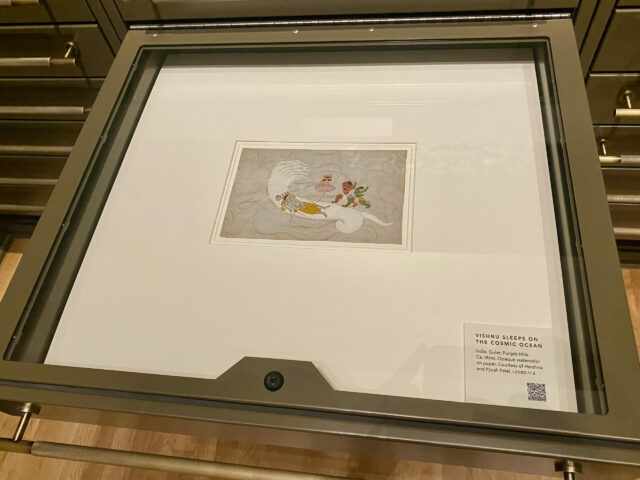 The staff put the paintings in the drawers and each one features a QR code visitors can scan that brings up the labels for the exhibition.

The paintings have been studied and researched by many Emory classes over the years, including courses on the Avatars of Vishnu and the Ramayana.

The museum features pieces that speak to the first images of the Buddha in human form. Right after the Buddha died, people used symbols like the Bodhi tree and his footprints as ways to call him to mind.

“It’s not until the first and second centuries CE that we start to see images of the Buddha in human form,” Hornor said.

Some pieces show the Buddha as Prince Siddhartha Guatama with heavy jewels, jewelry and a lion-headed turban. Other images show traditional depictions of the Buddha where he has renounced his wealth, given up his earrings and wears monk’s robes.

One wall in the gallery features powerful goddesses, including Palden Lhmo, a Tibetan protection goddess, and Durga. She was created when all the gods were defeated and could not defeat the buffalo demon. They channel all of their energies together and create the goddess.

“The buffalo demon has been given this boon that he cannot be killed by man nor god, so they create the goddess,” Hornor said. “She is able to slay the buffalo demon that represents evolution.” 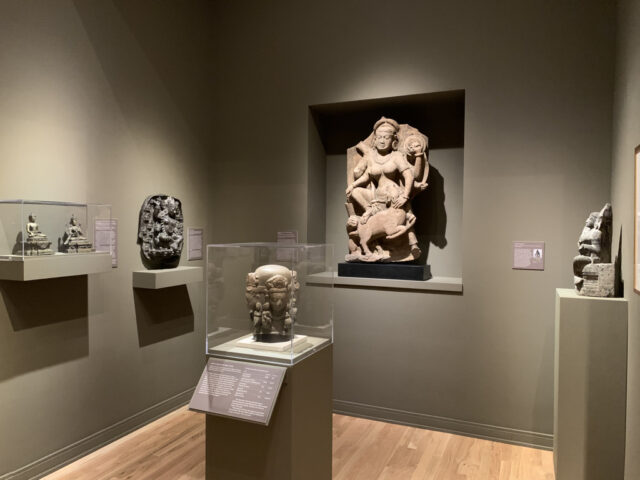 The back wall of the gallery features depictions of some goddesses, including Palden Lhmo, as well as the Shiva Linga in the center of the room. Photo courtesy of the Michael C. Carlos Museum.

In the middle of the room, visitors can see the Shiva Linga from all sides and can be walked around. Hornor said that the Shiva Linga, in a temple, would be in front of the image of the goddess.

Hornor added that when she and the staff were installing the artwork, they placed the Shiva Linga out with a compass, as one specific face is meant to face north.

“We are not a temple, but we want to be respectful,” Hornor said. “That’s why Ganesha is at the beginning. That’s why [the Shiva Linga] faces north. These are the things that working with faculty, who are so knowledgeable about these things, we were able to make it happen.”

PhD. candidate in the graduate division of religion, Aditya Chaturvedi served as a research assistant on the reinstallation project.

“Aditya actually grew up in India. He is Hindu,” Hornor said. “Not only is he working on his PhD., so he has the academic experience, but he brought the lived experience of these objects to us in a way that even the faculty felt that they learned so much from him. He was a really integral part of this process as well.”

The Asian gallery is a self-guided display. The museum is located at 571 S. Kilgo Circle. It is open Tuesday through Friday from 10 a.m. to 4 p.m., Saturday from 10 a.m. to 5 p.m. and Sunday from noon to 5 p.m. Admission is $8 for adults, $6 for seniors, children and students, and is free for Carlos Museum members, Emory students, faculty and staff with their Emory ID, and children ages five and under.

Museum guests and staff are required to wear a mask. Hand sanitizing states are placed on all levels of the museum. The museum is cleaned and sanitized continuously and misted daily to disinfect all public spaces.