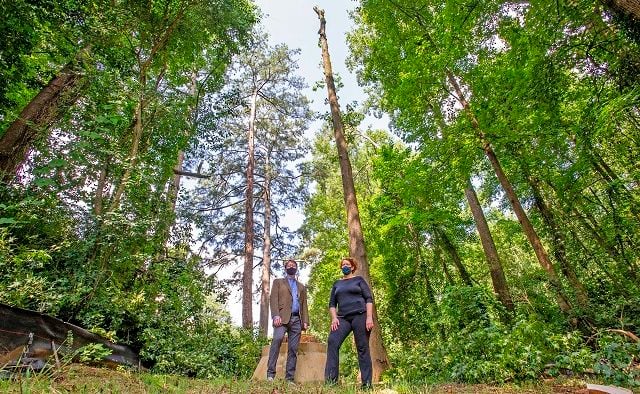 It has been about 15 years since Decatur has added to our tree canopy. Instead, things have gotten worse. We have added over a hundred acres of impervious surface, and the quality of our canopy has been degraded, in large part due to rapid single-family redevelopment and full-lot, clear-and-scrape practices.

The status quo isn’t working. For more than 10 years, the city’s goal has been to add about 10% to the existing canopy — a reasonable amount that we have nonetheless struggled to achieve. We have all seen significant tree loss in our daily lives. Luckily, other trees do continue to grow and be planted. And the data bears this out — we haven’t added canopy overall because the losses have been offset by growth. The operative word is luckily — we are gambling with our tree canopy, which currently lacks any meaningful protections.

Decatur likes to say “We Plan and We Follow Through” — but on trees, we are still working on the follow through. So thankfully, the city and its Environmental Sustainability Board have been preparing an update to its tree ordinance, with some real improvements in the latest draft.

The latest draft improves this situation significantly, but it doesn’t go far enough. First, some good stuff. Instead of allowing three trees on every site to be taken down without any questions asked, the city will now take a look at whether property meets canopy goals, and require a certain amount of canopy on property be preserved. In addition, grading and scraping sites is limited to a percentage of the buildable area.

A tree ordinance promotes fairness by setting minimum standards, so all residents contribute toward the benefits of trees. Trees save energy, they improve property values, they reduce flooding. And not just on our properties — on our neighbors’ as well. We need an ordinance to make sure that everyone contributes fairly to those collective benefits. Minimum standards make sure that we have enough trees to keep our neighborhoods safe and healthy, but also that everyone bears their fair share of this collective endeavor.

There is still a good deal of room for improvement, though. Strangely, the city’s latest draft lowers the bar on expanding our canopy, reducing our canopy goal by about 80 acres, or roughly the size of Legacy Park. Don’t be fooled by the numbers in the latest canopy study because the city has changed how it measures canopy. So, the same amount of trees which used to be called 45% coverage is now called 57% coverage. But it’s the same amount of canopy. Residents can be forgiven for being a little confused because the city’s own communications have been less than clear on that point.

Climate change is going to kill more people in the future just from increased ambient heat — this is no exaggeration — and we need to act now to create the shade that will cool our homes and sidewalks in the future. Any goal less than 63% canopy is lowering our current goal — let’s work toward 70% as Commissioner Dusenbury has rightly called for.

The latest draft has been criticized for being too “penalizing,” but this misunderstands the way the ordinance operates. The city has identified a scientifically grounded, industry-accepted set of monetary values for trees that would compensate your neighbors for a failure to meet minimum standards. These values capture the benefits of trees that you would have been required to plant under the ordinance — property value, stormwater, energy, everything, translated into dollars. If you violate the ordinance, it’s only fair that you should make it up to your neighbors. It’s not punitive — it’s simply making up for the value of the trees we need.

But the good news is that planting a tree is far cheaper than paying for its benefits. The city could consider providing trees in kind if property owners face financial hardship and are actually unable to pay for a required tree. This could go a long way to mitigate potential equity concerns. To their credit, the city does a lot already to give away free trees and plant its own, and these efforts could be integrated with code enforcement to ensure outcomes are equitable. But let’s not throw the ordinance out because of issues that can be fairly and reasonably addressed. Let’s give folks who can afford it an incentive to plant real trees, and if they don’t, it’s only fair that they make up for the benefits we will all be missing.

This ordinance needs support. I encourage everyone to take a look at the city’s tree information page here and submit your comments on the draft to [email protected]