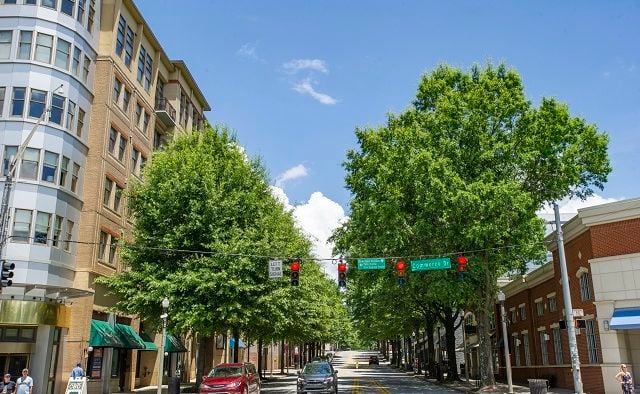 Decatur, GA — As a proposed revision to the city’s tree ordinance makes it way to the Decatur City Commission, the Decatur Environmental Sustainability Board is continuing to advocate for a larger tree canopy goal.

One question the board is considering: should the city waive the requirements of the new tree ordinance to allow for development of more affordable housing?

“I think this also has unintended consequences, and I think we should really think carefully about urging the City Commission to strike that,” ESB member Rich Malerba said.

He also suggested that instead of striking the exception, the City Commission could waive tree bank payments and properties would still have to adhere to the rest of the tree ordinance. The board agreed that this section needs to be further defined.

“The maximum amount of damage we would do to the canopy would be limited to the amount they would actually be allowed to put in the tree bank anyway,” Malerba said.

Lead for America Fellow David Nifong said the exception would be for developments that go above and beyond the city’s inclusionary housing requirements and what’s legally required.

Some concerns were also raised about Legacy Park and tree canopy exceptions being made for possible affordable housing developments at the park.

“We don’t want them to build in Legacy Park and not follow the ordinances of proper tree canopy coverage,” Malerba said. “We don’t want them building four large buildings and not have to have regard to what types of trees are on it. To me, that is one of the biggest things that this is in here for is because they are looking at large-scale building projects and want to make an exception for them. I don’t think we should allow that to happen.”

In the draft of the tree ordinance, the tree canopy goal is set at 60%, which the ESB and members of the community have said is not much of an increase. They want the city to set a larger goal.

The current tree ordinance does not have a canopy goal, but the Community Forestry Management Plan sets the citywide canopy goal at 50%. Malerba has previously said that when that goal was set, the city had 47% canopy coverage. When the city began using a new metric to measure canopy, the canopy was 57%.

“Now we have 57% canopy coverage based on our new metric. It’s still 47%. Nothing has changed,” Malerba previously said.

“I think it’s good to set that goal high because it shows we as a city are serious about trees,” he said. “We’re serious about all the things we put into our strategic plan about the environment.”

He added that the canopy goal is an aspirational goal and the only practical thing it would do in the future is trigger some changes to the ordinance or require the city to do more plantings in the public right of way.

The current tree ordinance additionally provides a canopy credit, in which new trees receive credit for the tree canopy based on 100% of canopy cover potential at maturity.

The draft ordinance also proposes a canopy credit that depends on the size of the tree. New large trees receive partial credit for tree canopy based on 50% of canopy cover potential at maturity. Medium trees receive 75% credit, and small and very small trees receive full credit.

Malerba raised concerns about properties that would fall under alternative compliance, where they don’t meet the minimum canopy coverage requirement and would have to either plant more trees, or add green infrastructure or pay into the tree bank.

“The problem with this is the unintended consequences of a bunch of small trees being planted. Two small trees equals one large trees,” he said.

Malerba recommended that the canopy credit be 50% across the board, regardless of tree size.

The city is hosting an open house to gather community input on the tree ordinance on Thursday, Oct. 21, from 4-8 p.m. in the dining hall at Legacy Park, 500 S. Columbia Drive.