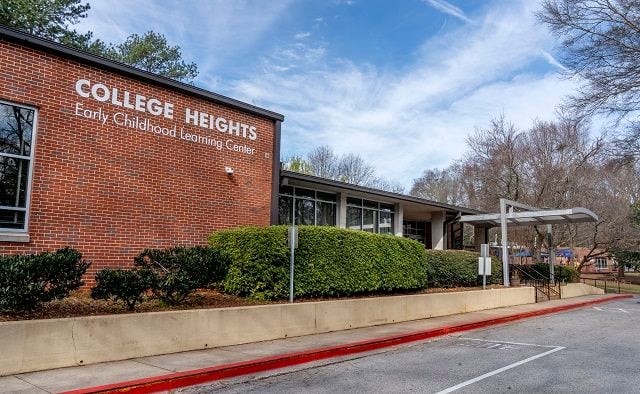 Decatur, GA — City Schools of Decatur could be getting a new early childhood learning center within the next five years.

The School Board, at its Oct. 26 meeting, discussed the initial draft of the district’s five-year master plan, which totals $57 million, and the projects the board would like to see come to fruition.

The five-year Capital Construction Master Plan addresses options to update and maintain the school and non-school facilities and will set the direction for development and growth at CSD to support the school system’s vision, according to the agenda packet.

The draft master plan includes a $24 million project for a new combined early learning center and upper elementary school along West Trinity Place between Electric Avenue and Commerce Drive, across the street from the CSD central offices. The lot is currently an open area and is owned by the school district.

“Back in 2017, the city, [Decatur Housing Authority] and City Schools of Decatur entered into an agreement when that land was purchased that would be the designation for that. I think it’s time for that project [to get] up and going,” Superintendent Maggie Fehrman said. “We see a need for it.” 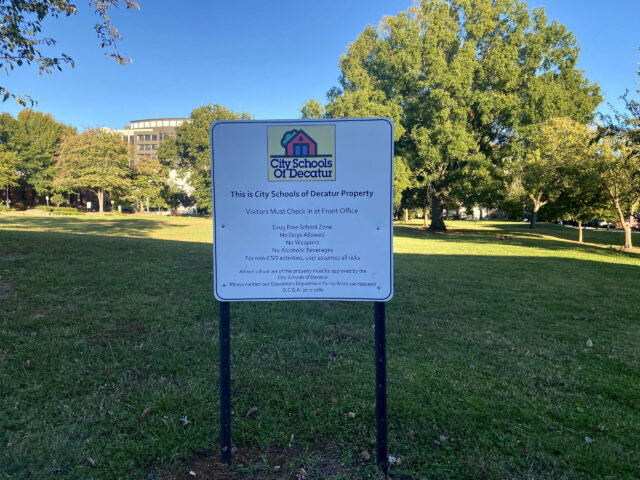 City Schools of Decatur has proposed building a new early childhood learning center near the Wilson Center. The property is located on West Trinity Place, between Electric Avenue and Commerce Drive. Photo by Zoe Seiler.

Fehrman told Decaturish that “both Talley and [Fifth Avenue Upper Elementary Schools] are projected to be over capacity in the next five years, so additional classroom space is needed. At this point, it is very preliminary and just one option for addressing growth in our student population.”

The proposed new upper elementary school would have 10 classrooms with the capacity for 250 students total, and an administrative suite. The facility would also have a new media, multipurpose space, and a kitchen and cafeteria.

The School Board generally supported the idea of the project but would like to see the facility be more focused on the early childhood learning center, not combined with an upper elementary school.

“I agree that the ECLC is a priority, but I see a lot of challenges,” School Board member Heather Tell said. “I feel like combining it with an upper elementary presents challenges, not only to the physical building, but also I feel like it deters from the mission of the ECLC.”

The district hopes to make the ECLC financially self-sustaining. CSD is subsidizing the current early learning center by about $1 million a year, Tell said. She added that more seats need to be added to the ECLC in order to make it self-sustaining.

Board member Lewis Jones wants the district to be deliberate about the size of the ECLC.

“The long-term vision was that we were going to make as many seats as we could, so that people who wanted to be served by the ECLC could be served and there wouldn’t be a waiting list, No. 1,” Jones said. “No. 2, that we could get enough seats so that the paying folks could subsidize, and we could provide better subsides, and make sure the people who would benefit most would actually get served by it.”

Fehrman also suggested that the second floor of the ECLC could be a dedicated space for Decatur High School’s college and career academy. 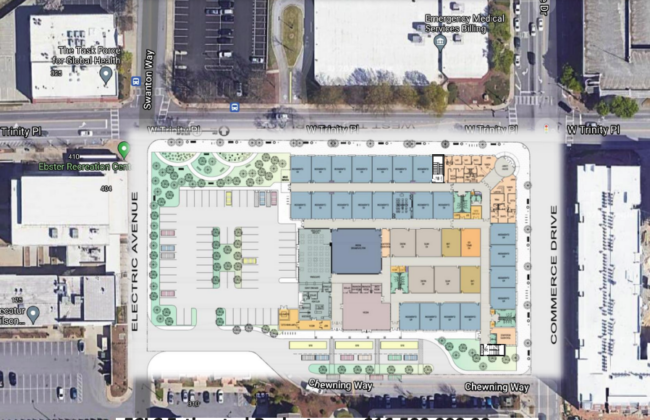 City Schools of Decatur has proposed the initial concept for a $24 million project in its five-year master plan to construct a new early learning center and upper elementary school. The project would potentially be located on the property at Electric Avenue and West Trinity Place. Photo is from the CSD website.

An idea in the master plan includes converting College Heights into a lower elementary school with a capacity of 325, as Winnona Park Elementary School has reached its capacity. The district could add classrooms to Winnona Park, but the capacity would increase to about 600 students.

The board could also consider adding classrooms and other spaces to the lower elementary schools.

“For me, I feel like these small lower elementary [schools] are what make Decatur a special school district and get that personalized feel for your community, so that’s why we prioritized converting College Heights to a lower elementary,” Fehrman said.

Although, board members considered keeping College Heights open if the new ECLC facility is built, so the district would have two ECLC centers. Tell said she didn’t see as much of a need to build another lower elementary school as the four other schools are between 67-78% of their full capacity.

Other proposed projects include:

— Fifth Avenue Upper Elementary School getting $9.25 million worth of renovations to expand the campus. The school’s enrollment has fluctuated over the years, and FAVE reached its capacity during the 2019-2020 school year. Enrollment is slightly down this year but is projected to be over capacity by the 2024-2025 school year, according to the agenda packet.

At Fifth Avenue Upper Elementary School, 12 classrooms would be added, increasing the school’s capacity to 700 students. The gym would more than double in size, expanding from 2,041 square feet to 5,000 square feet.

The kitchen and media center could be expanded into a cafeteria. Additionally, the proposal plans for a new cafeteria area, a new synthetic turf playing field, 24 new parking spaces will be included in the parking lot, as well as additional bus queue space.

— City Schools of Decatur plans to partner with the city of Decatur to build a track and field at Legacy Park. The project would include a synthetic turf field sized for soccer but set up for football and lacrosse, an eight-lane track, 500-person capacity bleachers, an event plaza and a future field house. The estimated cost for the school district is $2.5 million.

If the district were to construct every project in the master plan, it would cost about $57 million. CSD anticipates getting $40 million in E-SPLOST revenue, if the measure is approved by voters in November. In order to complete all the projects, Fehrman would recommend the district issue a bond.

The previous master plan had a total estimated cost of about $125 million to address projects at Decatur High School, Renfroe Middle School and other minor renovations. The district ended up spending about $90 million.

“I know it’s a big number, but in the scheme of things, to address all the growth that you would [see] plus all the additional needs that you’d have, I think it’s a reasonable number,” said Jeff Prince, CEO of Ascension Program Management, who is working with the district on the master plan.

The projects in the draft master plan have not been finalized. The district will go through stakeholder processes for the projects as plans move toward approval and construction is scheduled.