Kenco Residential is planning to expand its Kenco Lavista apartment complex onto the property at 2784 N. Druid Hills Road to build 24 new units. Photo is from the DeKalb County website.
Share

DeKalb County, GA — The DeKalb County Board of Commissioners is considering zoning changes for the properties located at 2784 and 2790 N. Druid Hills Road near the Toco Hills shopping center.

The owners of Kenco Residential plan to expand the Kenco Lavista apartment complex to add a three-story building with 24 new multifamily apartments.

The existing apartments are considered workforce housing and the residents usually have an income that is 40-80% of the average median income, said Clayton Edwards, CEO of Kenco Residential. The proposed expansion would continue to operate as workforce housing.

The board is considering amending the future land use map from suburban to town center and may change the zoning designation from R-100 to MR-2, medium density residential to allow for the construction of the new apartment building.

The County Commission at its Tuesday meeting did not take any action regarding the application and deferred the agenda item for two weeks.

“It provides a nice transition from the commercial zoned properties at the intersection of Lavista and North Druid Hills Road and allows for a land use transition to multifamily and attached housing and then adds an adequate buffer, and then on to single family detached single family residential units further north,” DeKalb County Planning Manager Brandon White said.

Kenco Residential is proposing installing a 50-foot buffer that will taper down to about 30 feet, if approved by the Zoning Board of Appeals, to connect the properties to the existing apartment complex. The applicant will also plant relatively mature evergreen trees and an eight-foot fence to provide space between the apartments and the residential properties to the north, White said.

Additional parking and access would be added between the existing apartments and the proposed building. The proposal includes restricted access on North Druid Hills that would be limited to emergency vehicles.

The proposal also includes two public art pieces, one of which would be a standalone art piece. The public art piece will have to go through a public participation process and be approved by the county planning commission. The applicant has also planned to install a decorative gate that would also be considered as a public art piece.

“Additionally, the proposal will include internal recreation, an additional density bonus they’re privy to as an amenity bonus by being within a certain distance to shopping, a grocery store, so they get a 20% density bonus provision there as well,” White said. 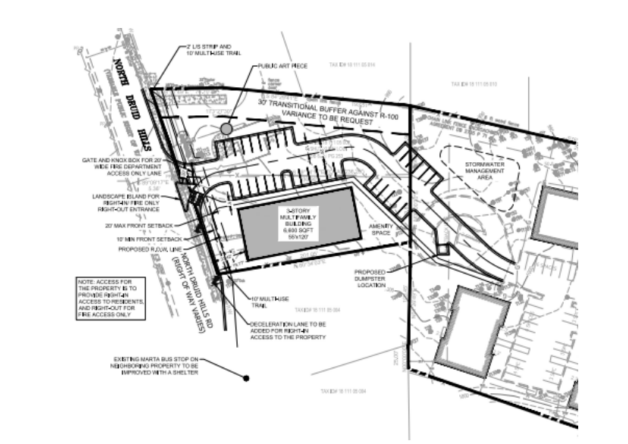 Kenco Residential is planning to expand the Lavista apartment complex to build a three-story building that would have 24 units. Photo is from the DeKalb County website.

The main concern from the neighborhood has been related to stormwater and how the apartment complex will handle stormwater runoff.

“Everything that is being captured at the commercial site is being discharged directly onto these properties. It ultimately flows behind the 1353 Fama Drive home,” said Chad Lambeth, project manager at Planners and Engineers Collaborative, the engineer for the project. “What we’re offering is ultimately we will be capturing that water from the existing Kenco Lavista apartments. There’s a lot of un-detained water there, as well as the commercial that we’re looking to capture and route into our system.”

The property is trying to detain more stormwater than required in an effort to capture all the water that’s an issue and over-detain, so it’s releasing at an extremely slow rate, Lambeth said.

The board granted a 30-day deferral on Sept. 30, but some residents have not completely resolved all their issues and matters with Kenco Residential, said Alan Pinsker, a representative of the North Druid Hills Residents Association and the HRA.

“We are generally in support of Kenco providing additional workforce housing on these parcels, but we are not yet fully ready to approve the project and move forward at this time,” Pinsker said.

He added that the residents received the revised site plans and other documents last Friday. Residents also received the stormwater letter of intent last week.

“After reviewing it with the Fama steering committee over the weekend, it does not provide the level of detailed information that we want to see in order to feel comfortable that the project will yield a solution that will mitigate the runoff problems that they have endured on their street for many decades,” Pinkser said.

PEC’s stormwater plan would meet the county’s requirements to capture and release stormwater at a reduced rate with excess holding capacity, it still proposes to release the stormwater through homeowners’ backyards, which will eventually flow down Fama Drive to Fern Creek.

“We want PEC to explore and present alternative solutions for the stormwater outflow, preferably toward Fern Creek or Lavista Road, rather than its current path,” Pinsker said. “As part of that effort, we want to have more precise calculations done to determine anticipated stormwater volumes from impervious surfaces on the site, which PEC has indicated will increase from about 10.7% now to 52.4% with their project.”

Residents would also like to Kenco to explore adding a wide sidewalk along the northern property line to Fama Drive.

Some concerns had been raised about the height of the building, but Doug Linneman, president of Kenco Residential, said a two-story building wouldn’t fit on the property due to the shape of the site and the constraints.

“We’ve pushed the building as far away from the two single-family homes as possible. It’s right up against the property line of the office building next door,” Linneman said. “The neighborhood also has expressed that they don’t necessarily want to see our building from North Druid Hills, so we currently have the building pushed to the maximum setback of about 37 feet from the curb.”

Kenco Residential plans to try to move the building back even more to have a total setback of 45 feet.